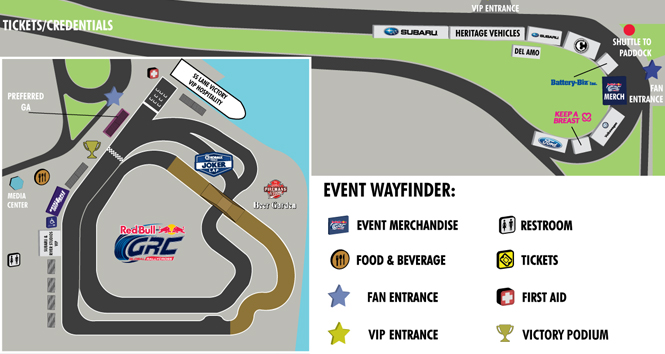 I’ve never been a fan of the crossover jump but its coming back to GRC – apparently crazy fast cars racing wheel to wheel on mixed surface for super short heats isn’t exciting enough. I was never a fan because in the early day because the jump didn’t appear to be laid out right and there were a bunch of unnecessary accidents. My hunch is this time it will work great. The new Red Bull GRC seems to be a much better job with safety and while the course layouts are small they seem to be getting a lot better for the drivers and fans. The crossover jump should add to that by effectively doubling the length of the potential track given the limited space location they are using at Los Angeles.

I’ll know in a few days when I head to Los Angeles to see the race in person. Here’s the track layout they’re going to use.

Here’s the GRC press release for anyone that wants more detail. Links to ticket sales are at the bottom:

For the first time since the 2012 season, Red Bull Global Rallycross will include a crossover jump in a course design in next weekend’s Red Bull GRC Los Angeles presented by Subaru Tecnica International. The crossover will be a key element in the brand new course design, which spans .702 miles and a season-high 13 turns.

Unlike last year’s layout, the 2015 course will run counterclockwise, with drivers charging from a starting grid in front of the SS Lane Victory into a pair of left-hand turns. Drivers get their first taste of the dirt with a rhythm section in turns three, four, and five, before hitting the dirt crossover jump (which will be closed with a bridge element) and returning to pavement in turn six.

From there, drivers will attack the interior section of the track, with turns seven through 10 running alongside the exterior section of the course. With the right-hand turn 11, drivers will pass under the crossover before confronting the Kobalt Tools Joker Lap, either making a hard left to take it or staying to the outside to complete the regular lap. A sweeping left-hand turn 13 brings drivers back to the frontstretch to complete the lap.