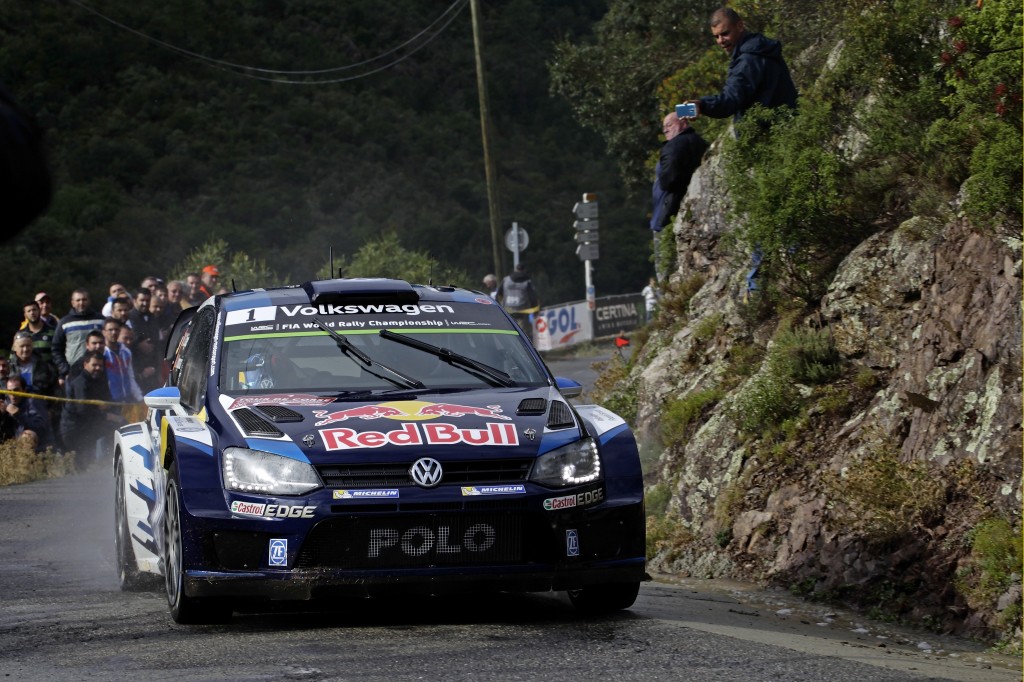 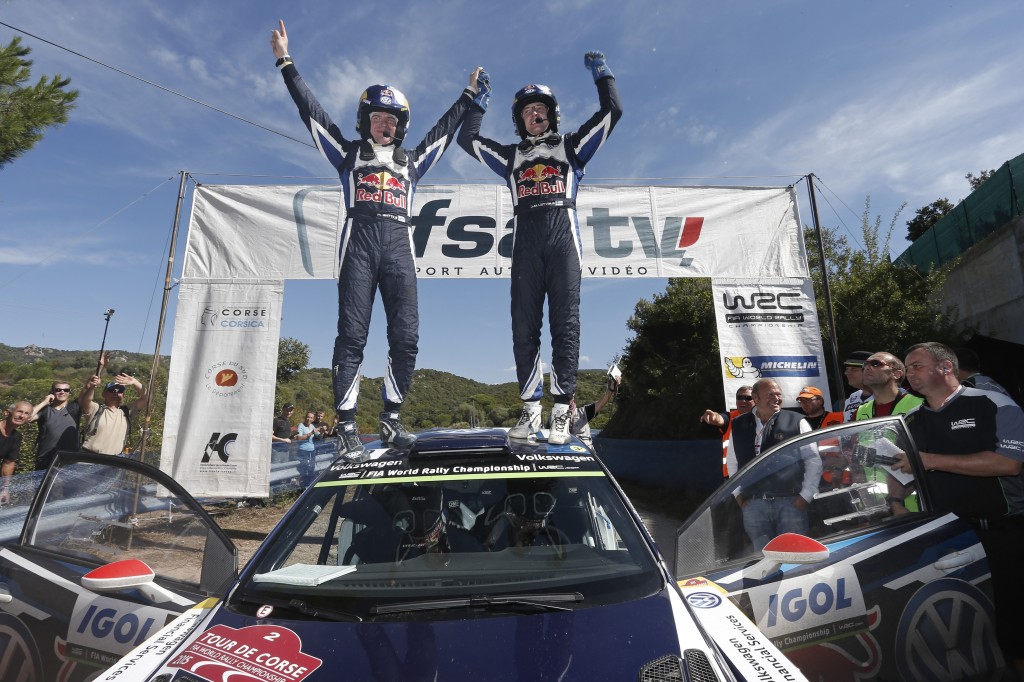 Second win in France, first on Corsica: Latvala/Anttila victorious again on asphalt
Another plus for Finnish-French relations: Latvala and Anttila’s second success of their career on asphalt was another remarkable story. At the fastest asphalt rally of all time – in Alsace in 2014 – the Volkswagen duo brought to an end a 15-year barren stretch for the proud rallying nation of Finland, who had had to wait a decade and a half for one of their countrymen to win again on this surface. Not only did they repeat the feat this time around, but they also showed their pace on what were probably the toughest conditions seen in recent years, and at a Rally France with an extremely diverse character. In doing so, they cut the gap to just one victory in the long-running battle between Finnish drivers (175 wins) and their French counterparts (176 ). Latvala/Anttila are only the second Finnish duo ever to win a World Championship event on the Mediterranean island, following in the footsteps of Markku Alén/Ilkka Kivimäki (1983 and 1984). A round dozen: third for Mikkelsen/Fløene – twelfth podium for Volkswagen
A dozen times on the podium: Andreas Mikkelsen and Ola Fløene continued their extremely impressive season with their seventh podium of the year in France. In doing so, they stayed in touch with their Volkswagen team-mates Latvala/Anttila to keep alive any hope of finishing runners-up in the World Championship. Seven podium finishes in the past eleven rallies this season – only reigning world champions and champions* elect Ogier/Ingrassia have been involved in the traditional champagne shower more often, having stepped onto the podium on nine occasions. With two rallies remaining this season, Mikkelsen/Fløene in third place now trail Latvala/Anttila by 34 points. A maximum 28 points are on offer at each round. At the same time, they were able to extend their lead over fourth-placed Mads Østberg/Jonas Andersson (N/S, Citroën) in the Drivers’ and Co-Drivers’ Championship to 28 points.

* Subject to the official publication of the results by the FIA. 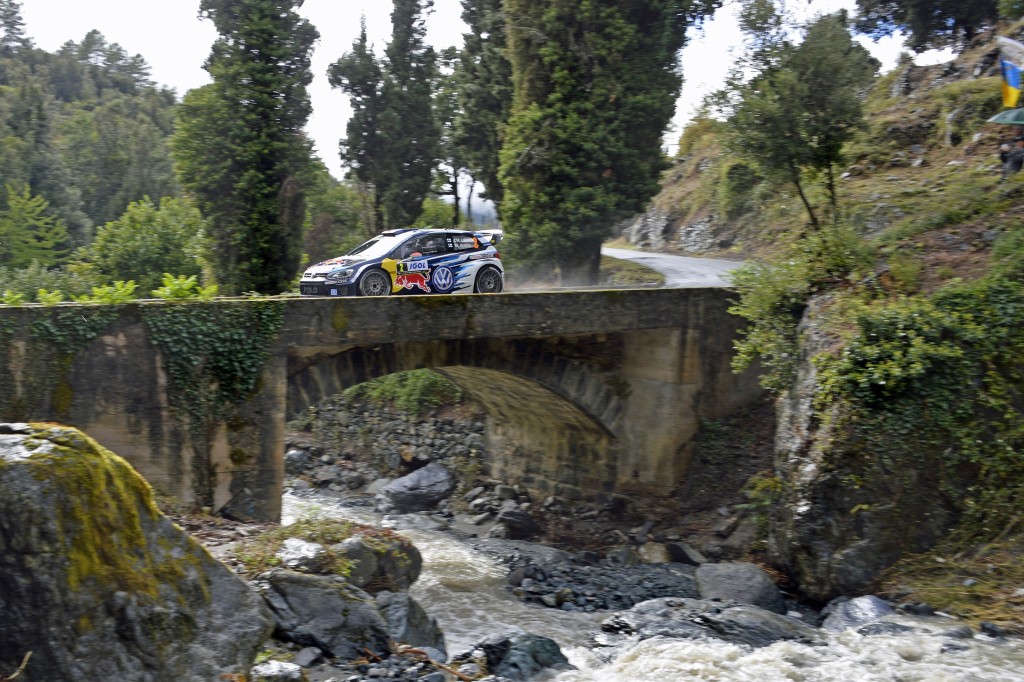 Mr. Power Stage – Misfortune for Ogier/Ingrassia concludes with a happy ending on the final stage
After their “black Friday” – at their home rally, of all places – there was some small consolation for Sébastien Ogier/Julien Ingrassia on Corsica, in the form of victory on the closing Power Stage. This sort of happy ending is truly Volkswagen’s domain and, above all, a speciality of Ogier/Ingrassia. For the 25th time in their career they picked up the maximum three bonus points on the final stage of the rally, on which, since 2011, the three fastest crews are rewarded with extra points towards the Drivers’ and Co-Drivers’ Championship. On 22 of these 25 occasions, Ogier/Ingrassia were at the wheel of the Polo R WRC. Ogier/Ingrassia had initially suffered a set-back on Friday, losing about 1.40 minutes due to a slow puncture. Their misery was then compounded by a ten-minute penalty for re-joining the race under Rally 2 regulations after having to change the gearbox outside of the regular service. Although this dashed any hopes of finishing in the points, they did go on to win the longest (SS6, “Muracciole–Col de Sorba”, 48.46 km) and the fastest (SS7, “Sotta–Chialza”, average speed of 103.68 km/h) stages of the rally.

Their Volkswagen team-mates also picked up a bonus point: Jari-Matti Latvala and Miikka Anttila finished third on the Power Stage. 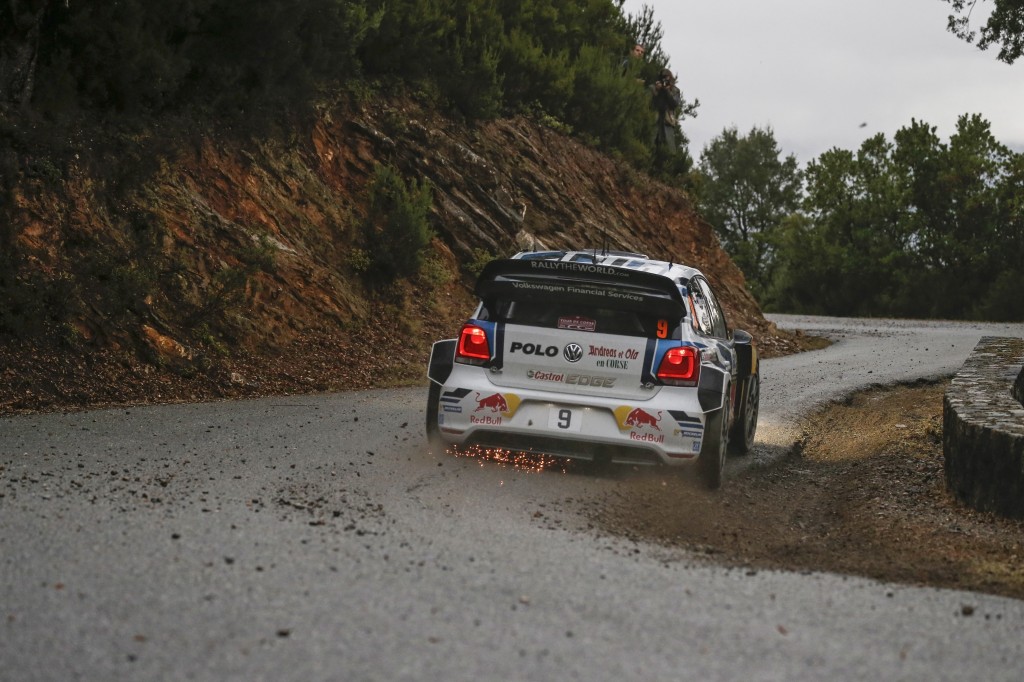 Extreme weather and tyre gambles – an extremely challenging “Tour de Corse”
Two of the nine special stages were cancelled due to landslides, while up to 361 litres of rain fell on Corsica during the Rally France – the teams and drivers were constantly battling extreme weather throughout the three days of the rally. Friday was dominated by a hurricane and heavy rain, while the mud-covered asphalt stages made life difficult for the drivers and co-drivers on Saturday. On Sunday, the biggest challenge facing the crews was a route that was damp in some places, dry in others, and was gradually drying out over the course of the day. The Volkswagen drivers primarily put their faith in the softer Michelin tyres, while the opposition opted for more of the hard compound. And the decision proved to be the correct one: Latvala/Anttila extended their lead by over 40 seconds to 43.1 seconds on the final day – with 94.91 kilometres against the clock the longest of the rally. Meanwhile, Mikkelsen/Fløene cut the gap to second-placed Elfyn Evans/Daniel Barritt (GB/GB, M-Sport-Ford) by 30 seconds to just 3.2 seconds. 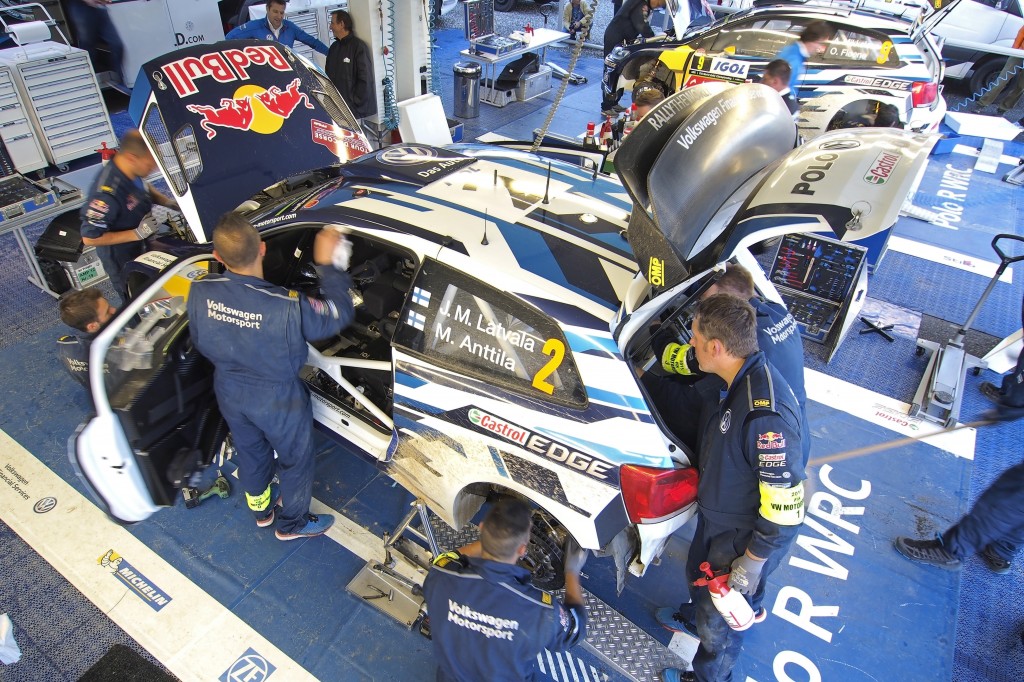 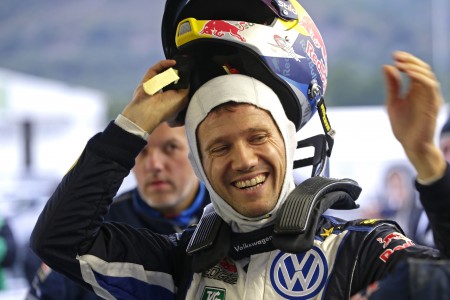 Sébastien Ogier, Volkswagen Polo R WRC #1
“Julien and I ended the rally with another fantastic day in the Polo here on Corsica. The conditions and profile of the route were very nice and spectacular today. Our strategy of fitting four soft tyres for the second stage of the day was perhaps a little too risky, but generally speaking I am very happy with the way the rally ended. And we won the Power Stage, which was a nice way for us to end this Rally France. Next year I will do everything in my power to ensure that the Tricolore is back flying the highest, after two Finnish victories in a row. For now, however, I would like to congratulate Jari-Matti and Miikka.” 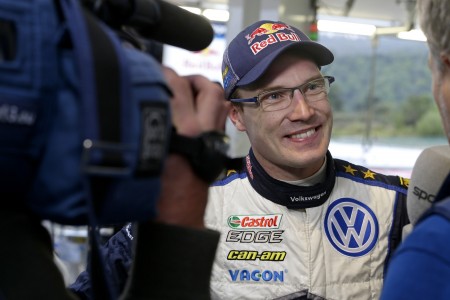 “I am struggling to put it all into words. It is a fantastic feeling to win here on Corsica. The conditions were not easy again today, as we were constantly switching between dry and damp sections. And my lead over Elfyn Evans was not exactly what you would call comfortable. Despite this, I wanted to avoid taking too many risks, to extend my lead in a controlled and cool manner, and to wrap up the win. I did exactly that. I would like to dedicate my victory to my idol Henri Toivonen. That is another reason why today is such a special day for me.” 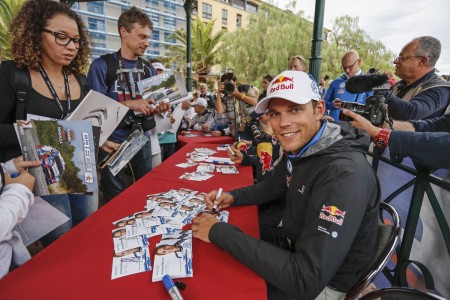 Andreas Mikkelsen, Volkswagen Polo R WRC #9
“The bottom line is, we are very happy with the way the Rally France panned out. Third place is a good result, although we were pushing really hard to catch Elfyn Evans in second place towards the end. We fought back really well, but unfortunately just came up short. Congratulations to Jari-Matti Latvala and Elfyn – they both drove a strong rally. I was perhaps a little too defensive at the start, but I still struggle a bit with the switch from gravel to asphalt. I can, and will, work on that. However, Saturday and Sunday worked out as I had hoped. We drove a sensible, but still fast, pace. As such, Ola and I can be happy with our performance. Sure, our goal still remains to finish runner-up in the World Championship – but we will have to perform some magic if we are to catch our team-mate Jari-Matti Latvala, who has a big gap. Whatever happens, we will definitely do our best.” 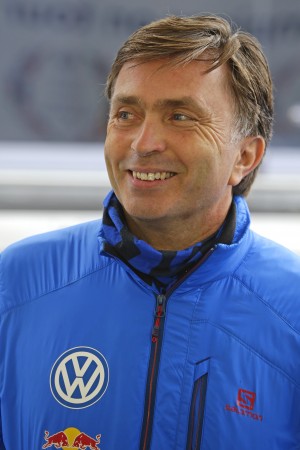 “What a nerve-wracking Rally France. Storms, the most difficult conditions for years, and three outstanding Volkswagen drivers on top of their game. We are proud of this win. Jari-Matti Latvala and Miikka Anttila drove a tactically intelligent rally, holding back in the extreme weather and then attacking when and where they had to. They were worthy winners – I take my hat off to them. The same goes for Andreas Mikkelsen and Ola Fløene. The fact that only the reigning world champions and champions elect have claimed more podium finishes this year tells you everything. Speaking of the world champions: unfortunately Sébastien Ogier and Julien Ingrassia were the victims of several doses of bad luck at their home race here on Corsica. However, victory on the Power Stage showed that they are still hungry for success and will fight right through to the finish.”

Corsica was  the shortest WRC rally ever. Landslides forced the organisers of the Rally France to cancel two special stages – the two scheduled runs of “Casamozza–Ponte Leccia” on Friday and Saturday, each of which would have been 43.69 kilometres long. As such, the rally on Corsica was reduced to 245.35 kilometres against the clock. Before this weekend, the 2007 Rally Argentina (248.90 kilometres) and the 2011 Rally Jordan (259.56 kilometres) were the shortest races in the history of the World Rally Championship. 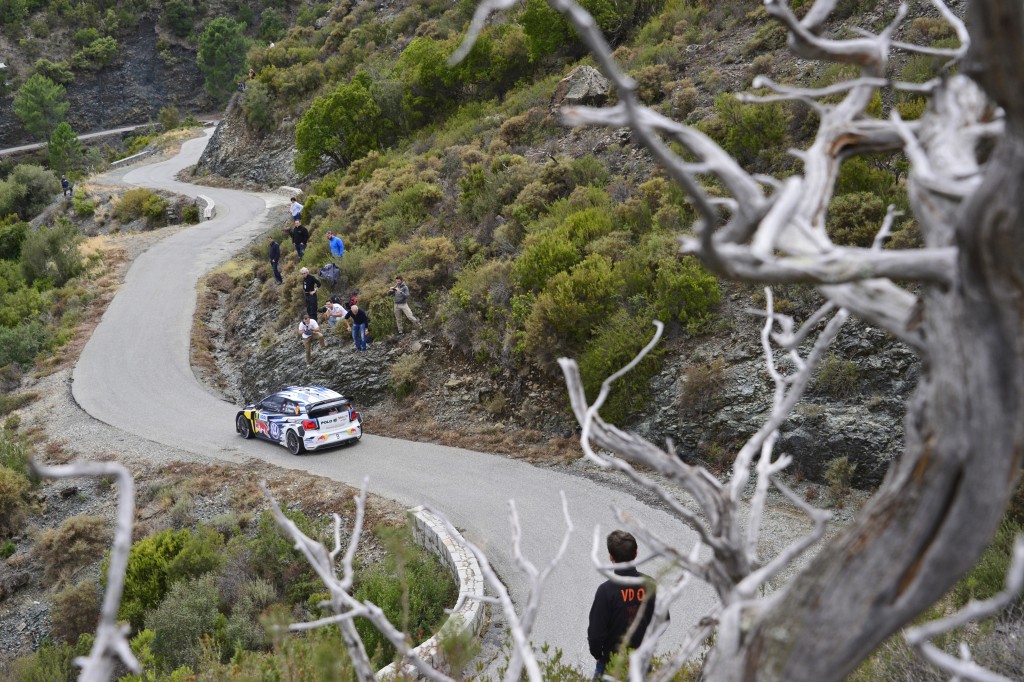