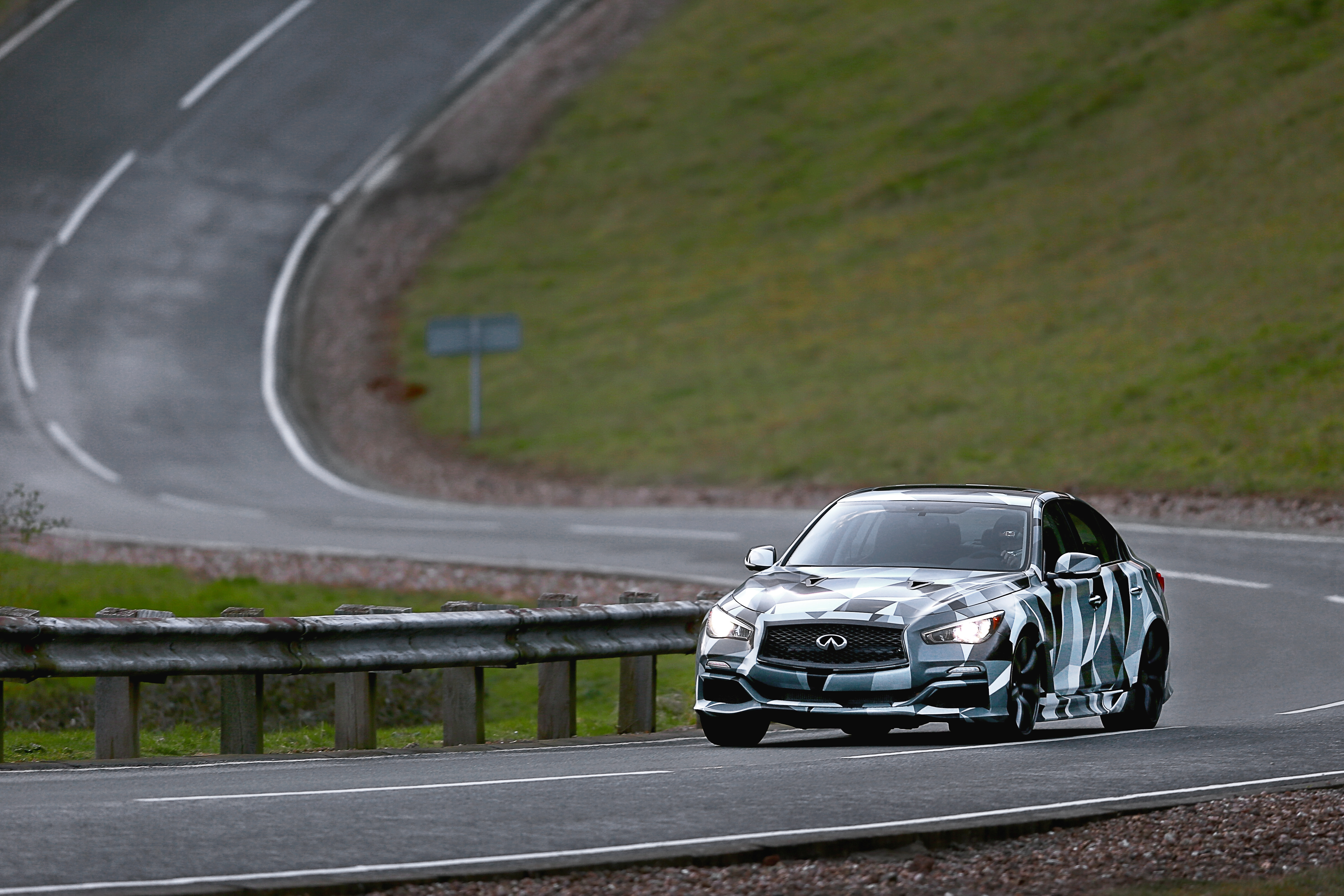 Infiniti revealed at the Beijing Auto Show 2014 that an Infiniti Q50 Eau Rouge prototype had been built and track tested and that the concept was now officially an engineering feasibility study.

The Infiniti Q50 Eau Rouge prototype has undergone on-track dynamics testing at the Millbrook Proving Ground, a leading automotive engineering and development center in the UK, in the hands of Sebastian Vettel, Infiniti’s Director of Performance.

The invaluable feedback of Vettel, the four-time Formula One world champion, will be engineered into the next stages of the prototype’s extensive development program: testing components, packaging and viability.

The Infiniti engineers will further refine the prototype’s aerodynamic performance and develop the rear axle and suspension set ups. Computer controlling is not ruled out for the suspension while initial wind tunnel data has shown that the prototype’s lowered ride height (minus 15mm – 20mm) has benefited under-body airflow. Further bespoke flat surface engineering for the prototype’s underside is also to be evaluated.

The Q50 Eau Rouge – a high-performance design study based on the luxury manufacturer’s award-winning Q50 premium sedan – was first revealed at the 2014 NAIAS Detroit Auto Show in January as a Formula One inspired, carbon fiber aero-enhanced concept.

At the Geneva Motor Show last month, the beating heart of Q50 Eau Rouge was revealed as a twin-turbo 3.8-liter V6 gasoline engine combined with a 7-speed gearbox and all-wheel drive. Predicted acceleration of 0-60 mph in less than four seconds and a top speed close to 180 mph would put the Q50 Eau Rouge firmly into the premier league of super-sports sedans.

“Taking the decision to build and develop a prototype of the Q50 Eau Rouge concept following the positive response we received in Detroit and Geneva, was a logical next step for us in our evaluation process,” said Johan de Nysschen, President of Infiniti Motor Company Limited. “Having a four-time world champion like Sebastian Vettel take an active part in the testing program around the prototype ensures that we will meet the level of performance criteria we desire for an Infiniti high-performance sport sedan.”

A decision to take the Infiniti Q50 Eau Rouge to production is currently under evaluation.

About Infiniti
Infiniti Motor Company Ltd. is headquartered in Hong Kong with sales operations in approximately 50 countries. The Infiniti brand was launched in 1989. Its range of premium automobiles is currently built in manufacturing facilities in Japan and the United States. Production in China and Europe will start soon along with the expansion of the brand’s portfolio.

As the Title Partner and Vehicle Performance Partner of Infiniti Red Bull Racing, Infiniti has a far-reaching technical collaboration with the Formula One team, and Sebastian Vettel, its four-time World Champion driver, serves as Infiniti’s Director of Performance.

About Infiniti in Formula One
Infiniti, the premium automotive brand, starts the 2013 season as Title Partner and Vehicle Performance Partner of Infiniti Red Bull Racing. With a deepened technical collaboration across people, process and technologies, an ‘open door’ approach is enabling both sides to access a pool of innovation, new technologies and R&D resources in the shared pursuit of precision and performance.

Since the partnership’s inception in 2011 it has already seen the launch of the Infiniti FX Vettel Edition and product development input from Sebastian Vettel and test driver Sebastien Buemi for the all-new Infiniti Q50 premium sports saloon. Infiniti continues to be the most visible automotive brand in Formula One, and the deepened partnership will ensure closer alignment on an increasing number of future team collaborations.