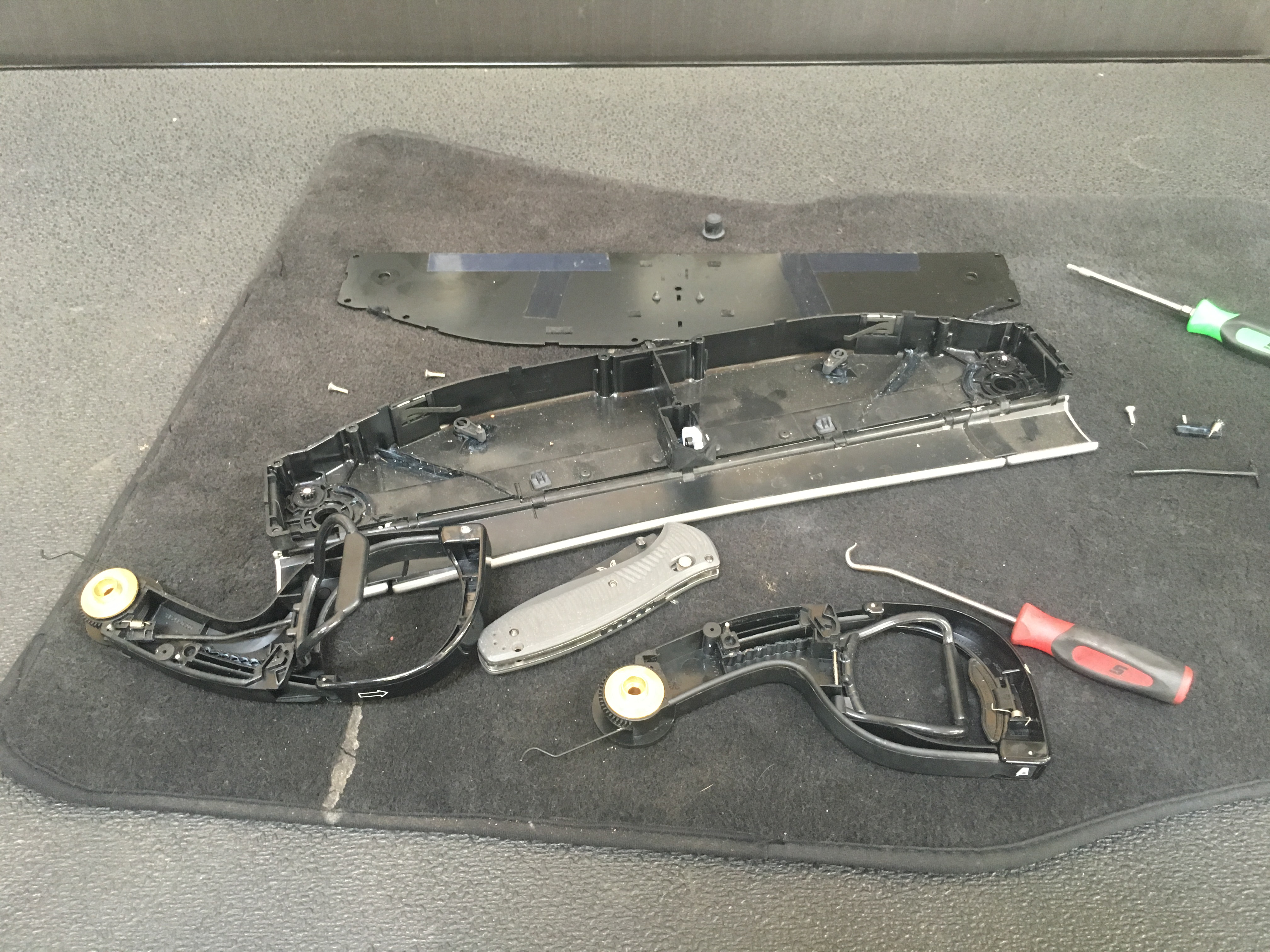 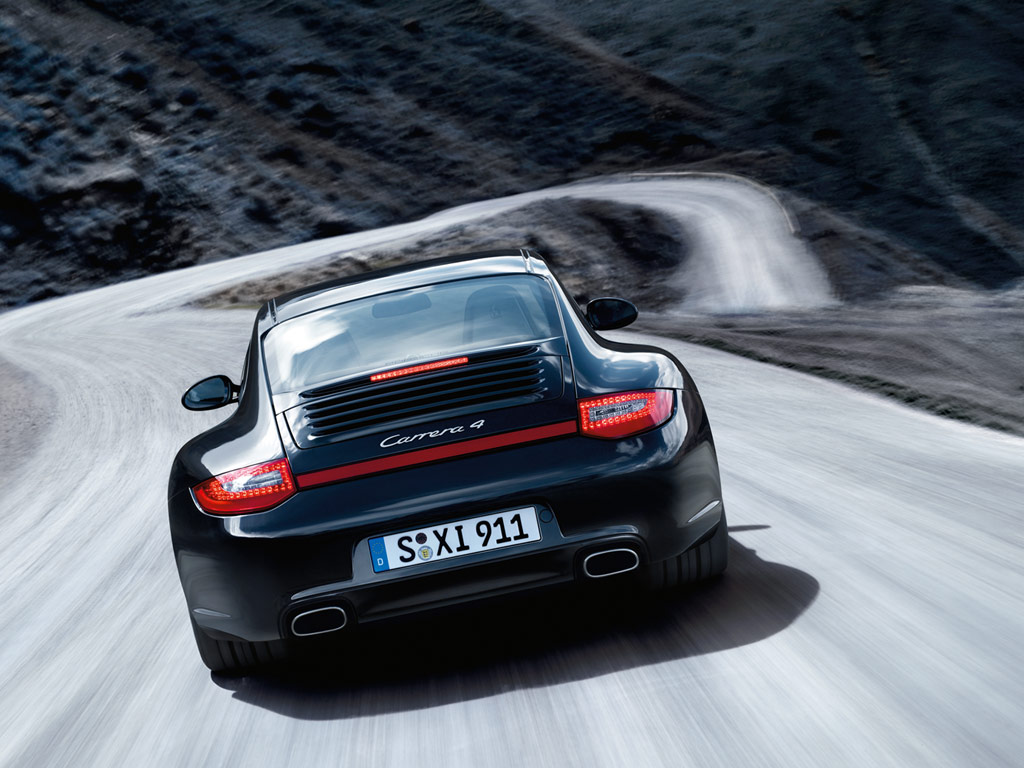 The Porsche 911 sold from 2004 to 2012(997) is a great car, but the cupholders suck and constantly stop working. Generally they fail to open when you push the button. Sometimes they fail to close. The good news is that it’s an easy fix.

The problem lies in this little mechanism that allows the cupholder to slide out slowly and gracefully. I’m not entirely sure what causes that little mechanism to fail but it feels like the lubrication drys out and it binds up. When this rotating mechanism sticks, the cup holder simply flexes and when you press it in to release the catch, it doesn’t move enough to hit the release in the back of the cassette.

The fix is simple. Take the cupholder cassette out. Take it apart, lubricate the rotating mechanism and put it all back together. The cup holders will come out slightly faster than before, but who cares? It works again and saves you $500.

You start by opening the glove box and removing the two allen head bolts that secure the cassette. They are about a centimeter from the left and right edges of the glovebox and a centimeter back from the edge of the glovebox. I didn’t take pictures of the location in the glovebox, but if you can’t find them you should stop now and take your car to the dealership. The two allen head bolts are accessible from glove box and go through these two brass sleeves shown with the red arrows. You’ll need an allen key with the rounded head that allows you to remove the bolt with the tool at an angle. 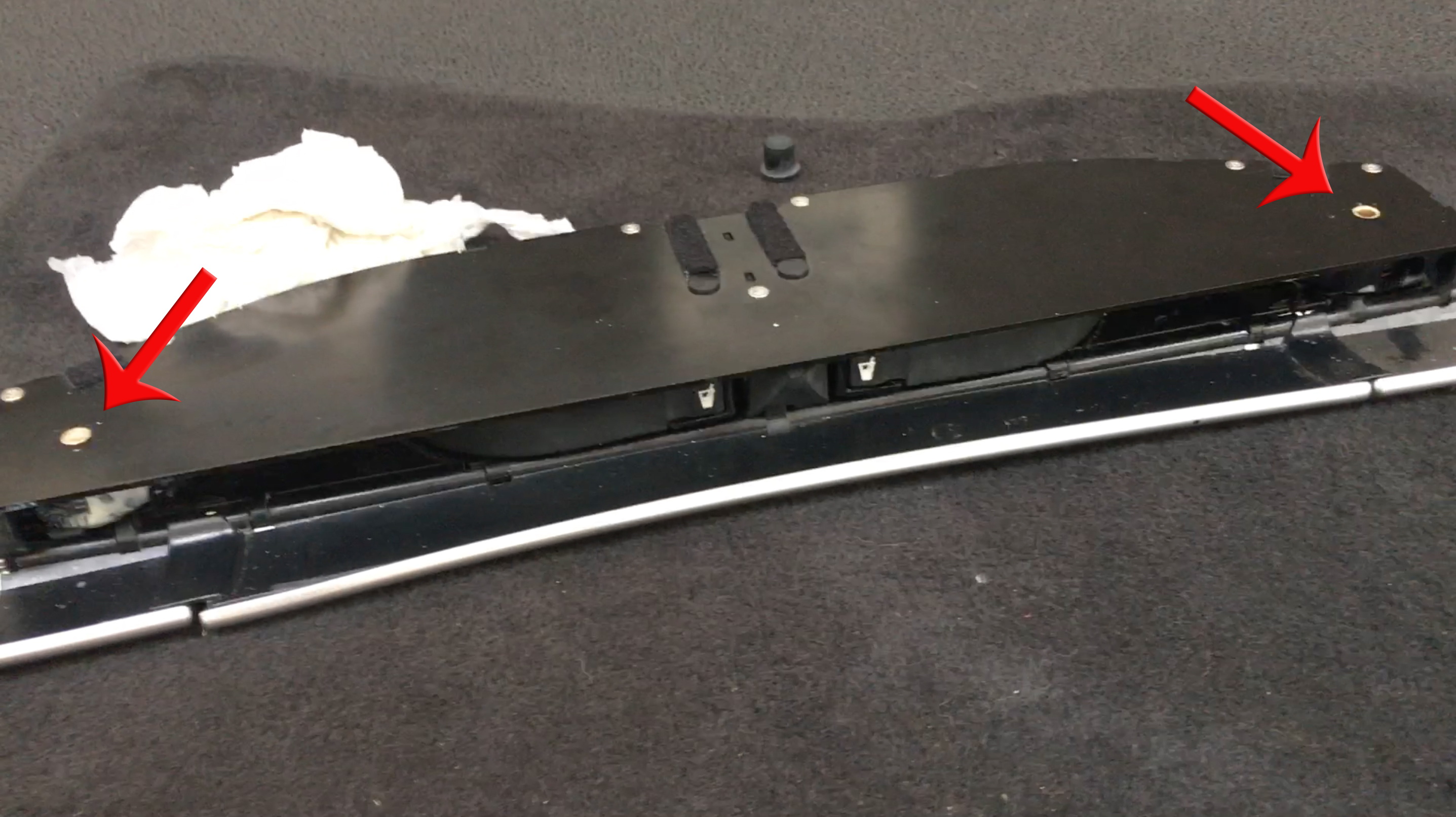 Once the two bolts are out, the cassette slides right out the front. Next you need to take the top off the cassette by removing the nine top bolts holding the cassette together – shown here with yellow arrows. There are two tor bolts off the side of the picture. I wasn’t doing this project to document the fix but realized afterwards that it could be helpful to others and these were the only pictures I had. 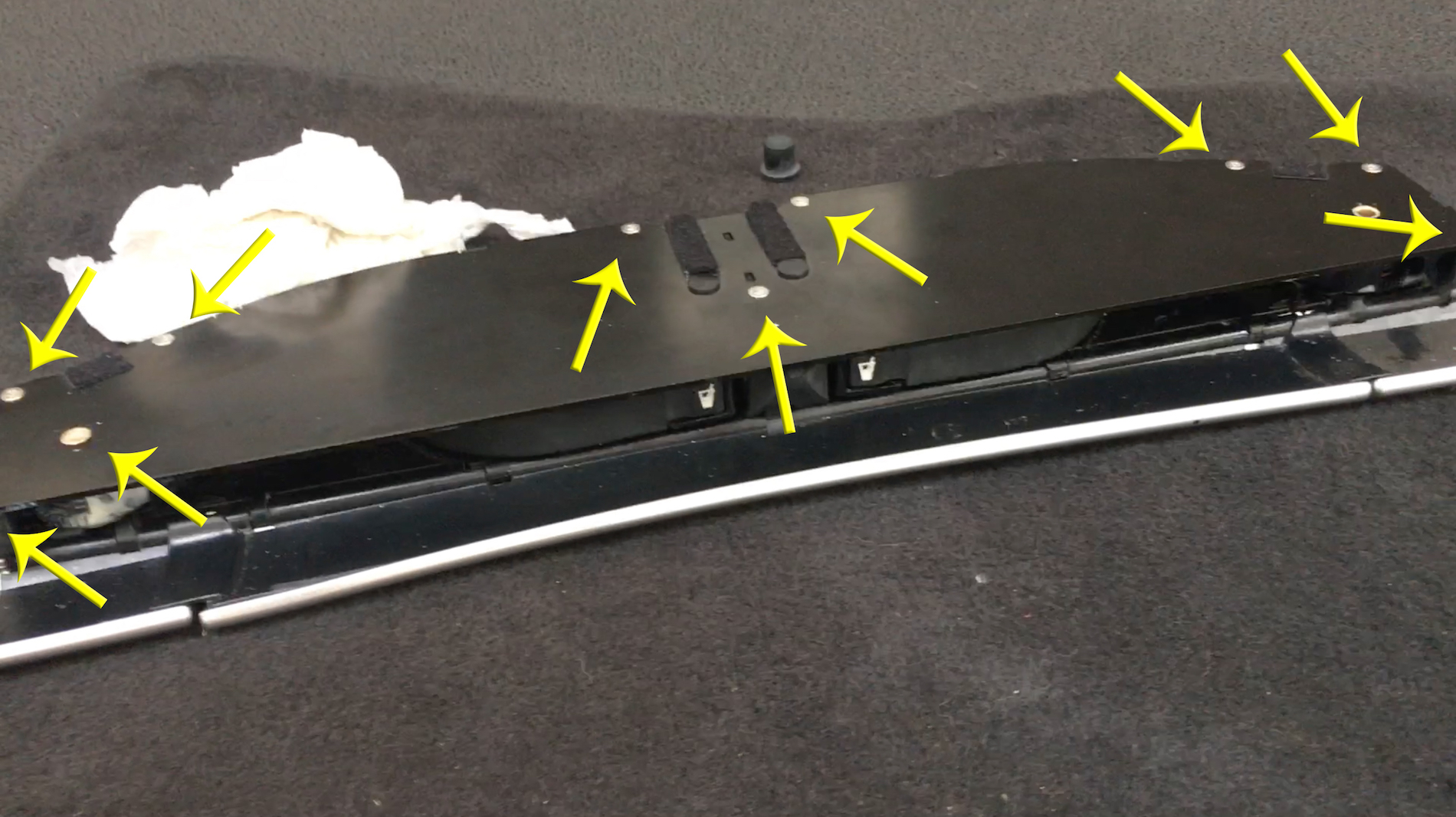 When you pull the top off you’ll find the two cup holders pivot from the corners. The top and bottom of the cassette keep them sandwiched in, but dont worry about it all coming apart. There aren’t that many moving parts and its easy to figure out how to put it back together. If you can, take a picture of how it looks when you take the top off, I didn’t because its so straightforward but it might make it easier. Especially with little things like if you can’t figure out where the spring loaded  hook goes that comes off the pivot point. Here’s a picture of it all apart so at least you know what’s inside.

The key to this whole repair is this this little part with the gear on it in the picture below. It’s a little mechanism that slows the release of the spring loaded cup holder. Whatever is below the plate dries up and makes it really tough to rotate. When that happens the plastic arm of the cupholder flexes instead and it doesn’t release the catch at the back of the cassette.

So I sprayed a lithium grease into the cracks around the edge where the green arrow stops and it spins much easier now. Do it do both sides for each cupholder. Keep in mind that its not the gear that need lubricating but the rather the surface below the disk around the gear. 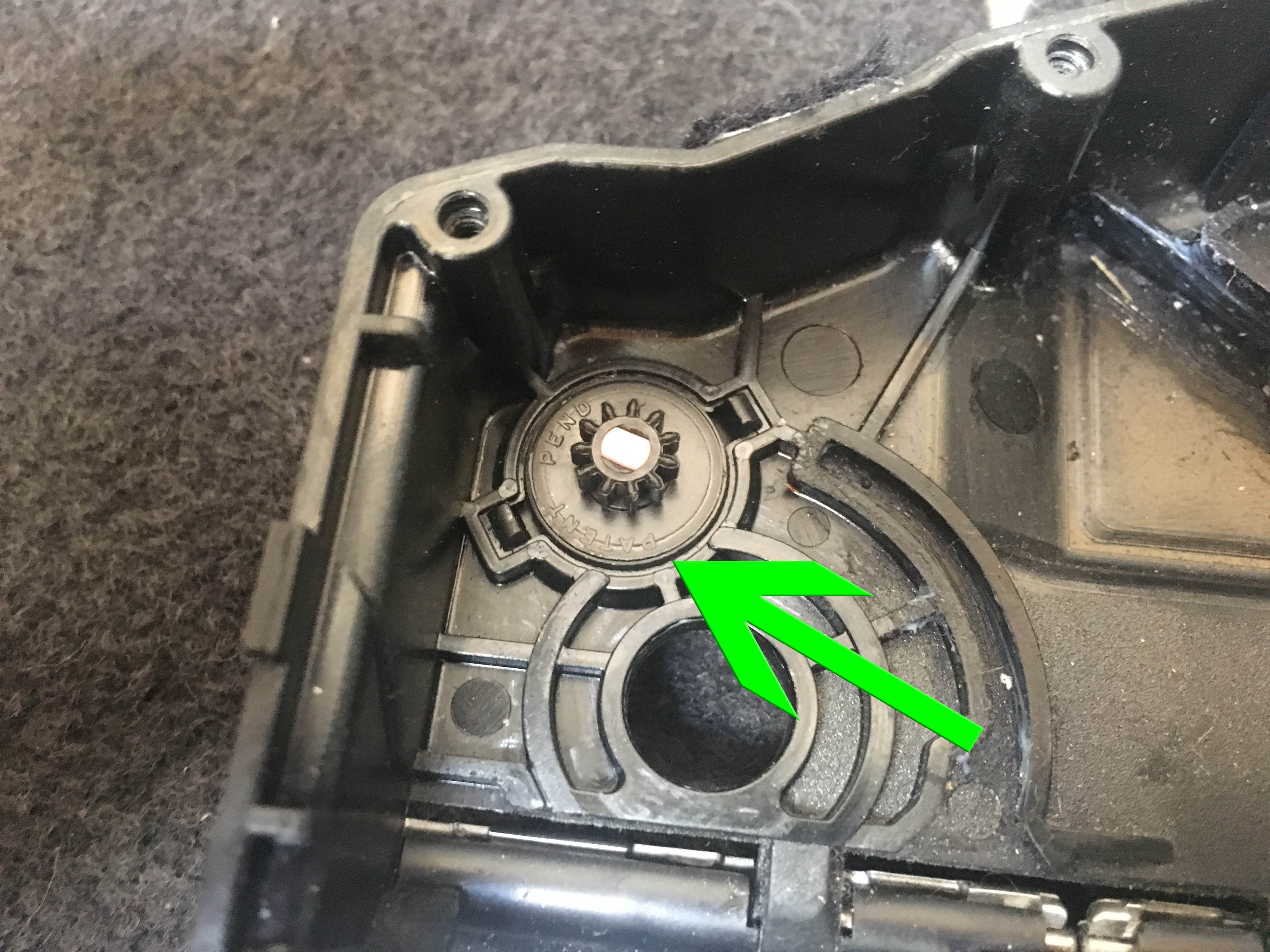 Then you put everything back in and bolt it together. You’ll notice it works great after lubricating the little gear part. Now slide the cassette back into the slot in the dash and put the two allen bolts back in.