(don’t worry it is the last part)

We left off at CR SCCA Event 5 at Lake County Fairgrounds and a finish I was relatively pleased with. The event that followed wasn’t until a twin weekend (back at Lake Count Fairgrounds) with TSSCC on September 26th/27th. Saturday I was rather excited as there was a brand new ND Miata racing against us and I wanted to see how well it would fair in class. That being said, he came on non-competitive tires and didn’t really offer a good data point to use for comparison.

It’s okay it still looked beautiful out there. I ended up 5th/9 in class and 52nd/104 on PAX — which I might mention is exactly mid-pack which was my goal all year. Sunday I ended up taking home the last trophy spot in class taking 2nd/4 and 47th/113 on PAX. I just squeezed by 3rd beating him by a marginal .050 seconds. This competitor, Jeremy F., has been neck and neck with me all year and I can’t begin to describe how much better the season is with that kind of competition. Even if you aren’t taking down top20 in PAX it gives you that drive to keep pushing yourself to beat that person, from this point on will be referred to as NEMESIS!!!!!

Just kidding; I love racing with him. This was a very nice relaxing weekend for me, no co-driver, no major changes — just some seat time and hanging out with friends. 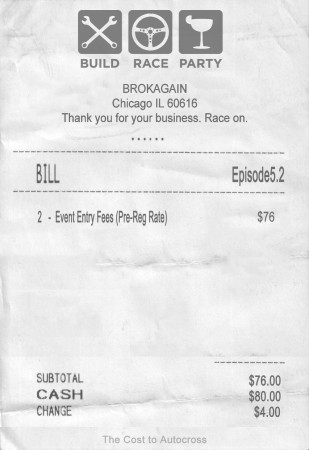 Following the twin with TSSCC there was a twin weekend with Chicago Region SCCA at Route 66 in Joliet Illinois. This was a great venue we used all of the ’14 season, but there were scheduling conflicts in ’15 so we didn’t get anywhere near as many events there. Thankfully I can say they have secured an event heavy season all located at RTE66 starting with the Learning Curve — where I got my autocross start, but I digress.

The event was held over the weekend of October 24/25th. As much as I don’t want to talk about day one (I managed DFL – dead f*cking last – in class), I have to as it happened and this series as an account of events. I spent the day as a Test & Tune having a good friend and veteran autocrosser (EVDM – best name ever) co-drive so he could try and give me some much needed pointers. To be fair, if I had of had a run without hitting cones I would have ended up much better overall but c’est la vie.

Sunday was all business and it showed. I was having a decent day all day and had my friend Jeremy at bay, but he managed to drop half a second on his last run putting him .266seconds in front of me. I ended 66/126 on PAX for the day. Stay tuned for a season recap that will be dropping within the next week or two. 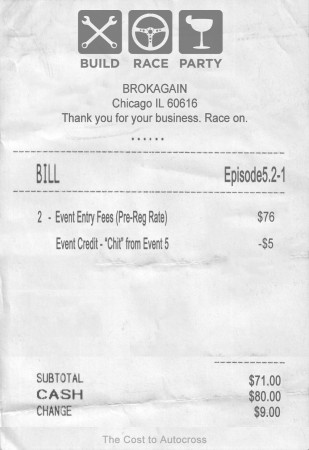