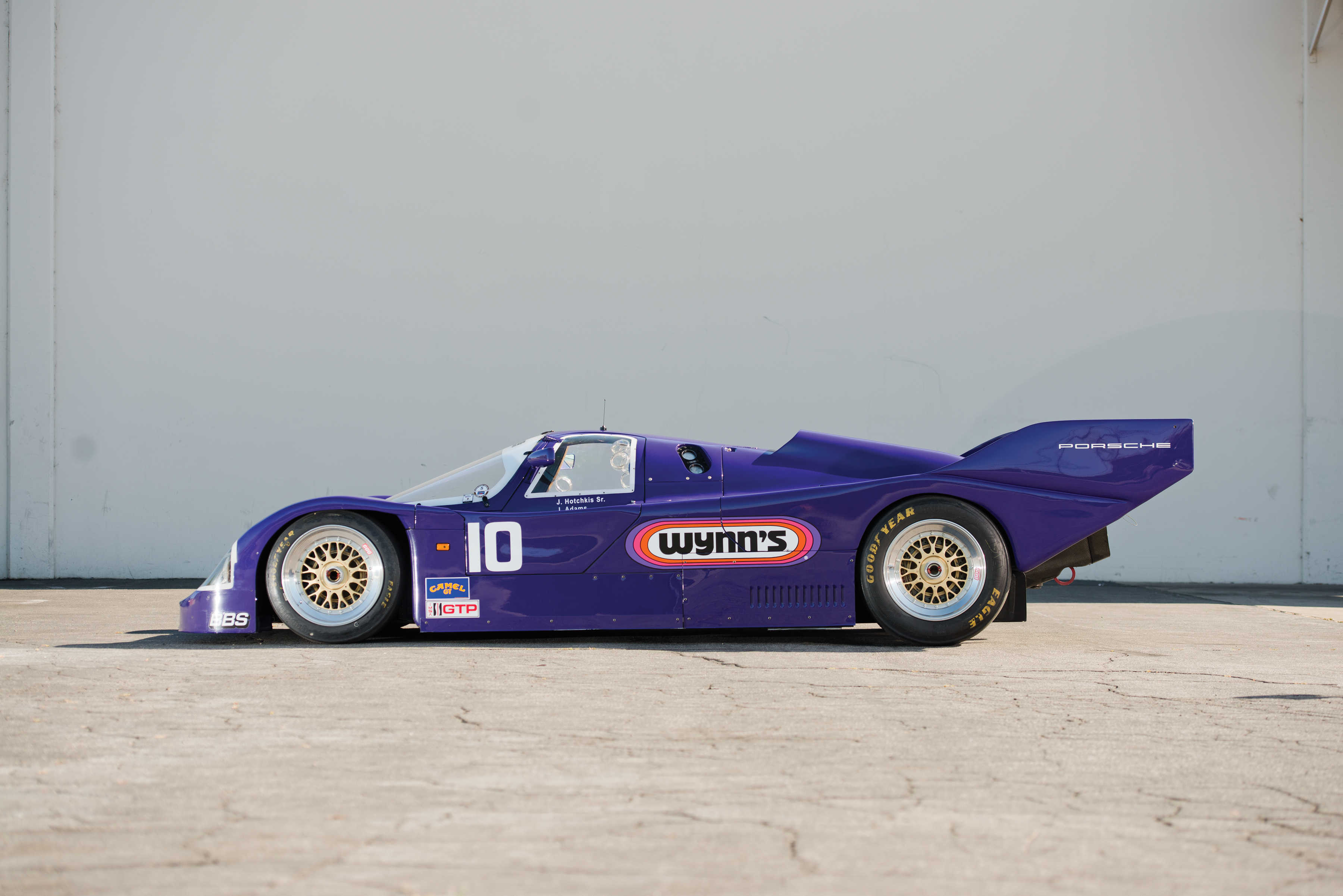 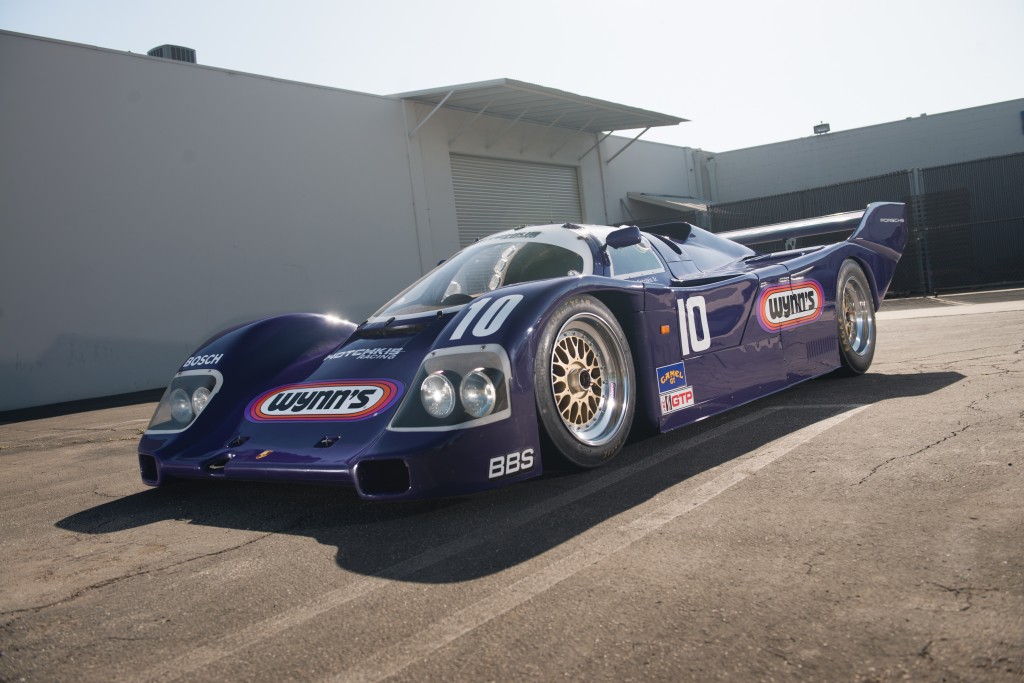 Porsche’s amazing 962 endurance prototype coupe, which was introduced in 1984, must certainly be ranked as one of the most successful and dominant racing designs in history. It was derived from the earlier-type 956 Coupe that was created for Europe’s World Sportscar Championship Group C, and as it was much-improved in all its variants, it proved to be tough to beat for almost a full decade, which is an almost unheard-of accomplishment. 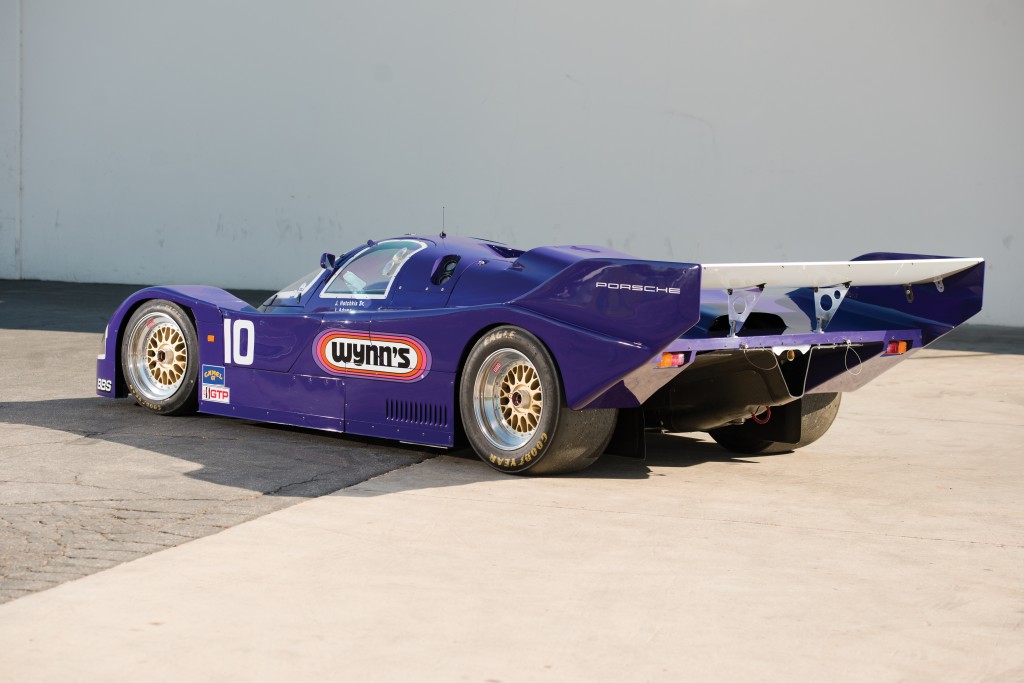 When the 962 was introduced as an entry for IMSA’s GTP series, it was initially powered by a derivative of the highly successful 2.8-liter, air-cooled flat-six 935 engine with a single KKK turbocharger. By 1985, IMSA had eased its restrictions to create more competition, allowing the sleek Porsches to run larger 3.2-liter engines. By 1988, again in the interest of leveling the playing field, 962s were allowed to run twin turbochargers and water-cooled cylinder heads, although their air intakes were limited to 36 millimeters. 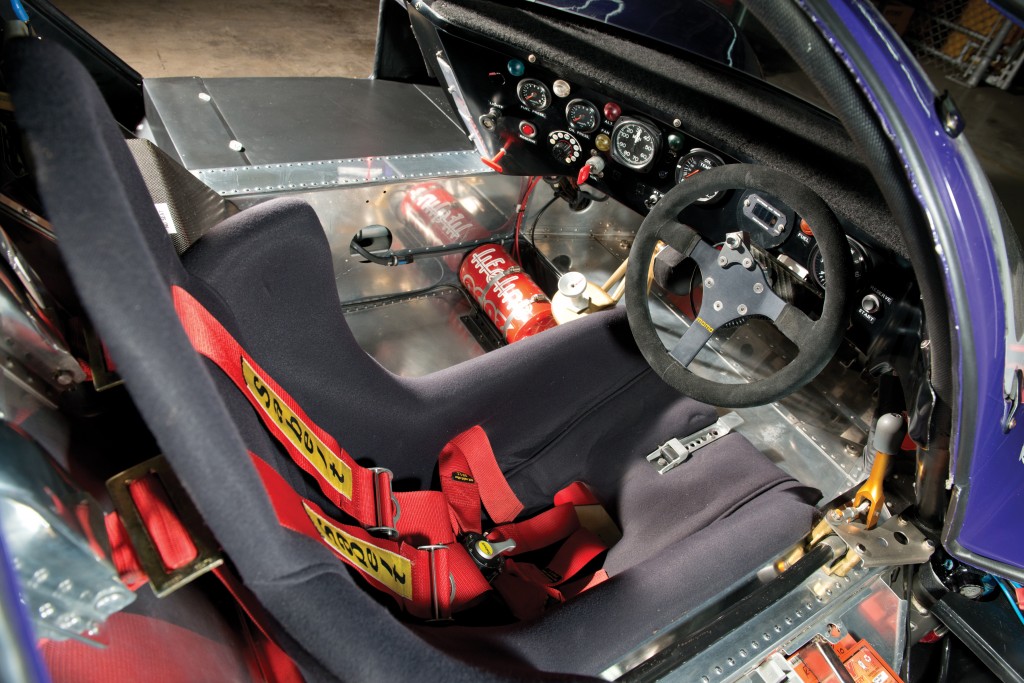 Between 1984 and 1991, a total of ninety-one 962s were built by Porsche’s racing department, with seventy-five of them being built as customer cars. During their impressive lifespan, a number were modified by various racing teams for improved streamlining and chassis performance. Among them was Holbert Racing, of Pennsylvania, which began modifying its own team cars and then began producing a small number of improved tubs for customers. Their cars were labeled from 962/HR1 to 962/HR7. Fabcar Engineering Inc. also got into the game, building new tubs for Porsche. Dave Klym’s new Fabcar chassis incorporated aluminum honeycomb with an aluminum sheet and stronger bulkheads, to improve stiffness and crashworthiness. 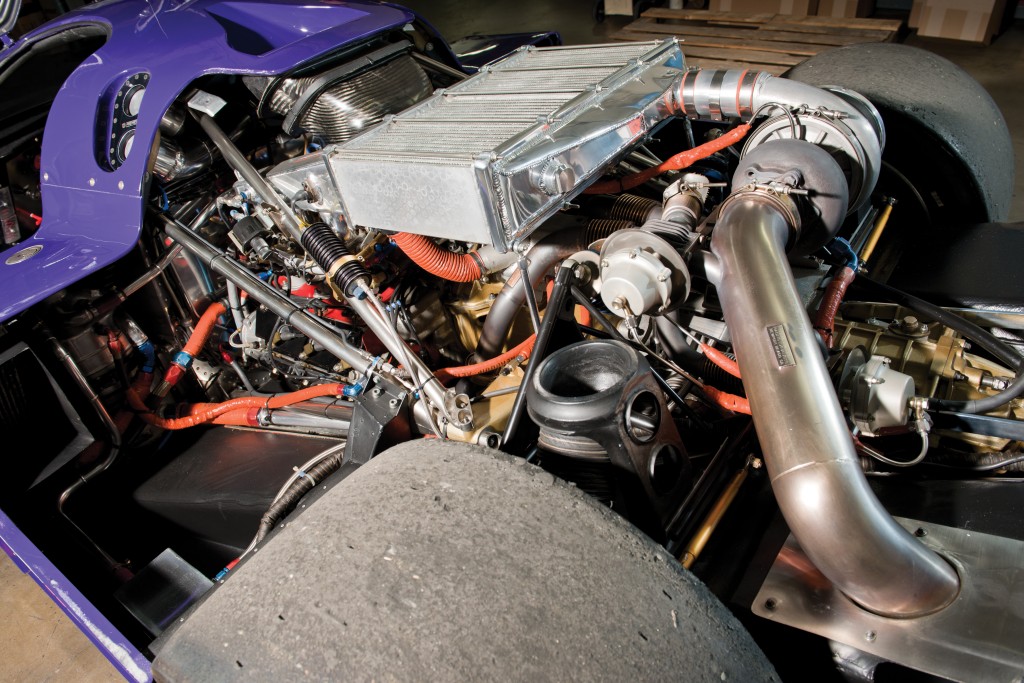 This 962 IMSA prototype, numbered F01 (HR3F), was purchased new from the Porsche factory by the Hotchkis family and its racing team. The car, carrying sponsorship and the livery of the Wynn’s Engine Oil Products Company, was tested at Watkins Glen, New York, by the late Al Holbert prior to the mid-season Camel Continental 500 on July 6, 1986. There, the car, driven by Jim Adams and John Hotchkis, qualified 13th and finished 8th. However, early in its IMSA career, the car was in an accident at Miami, and the original tub was taken back to the team’s shop, where it was disassembled and set aside until it was extensively repaired in 1989. A new tub, F02 (HR3FR), was ordered from Holbert Racing, the car was reassembled, and the Hotchkises went back to racing. In 1990, the original and newly rebuilt tub, F01 (HR3R), debuted at the 24 Hours of Daytona and raced for the rest of the 1990 and 1991 seasons. After the 1991, the Wynn’s 962 was retired from active duty until 1997, when it returned to the track as a formidable vintage racer. 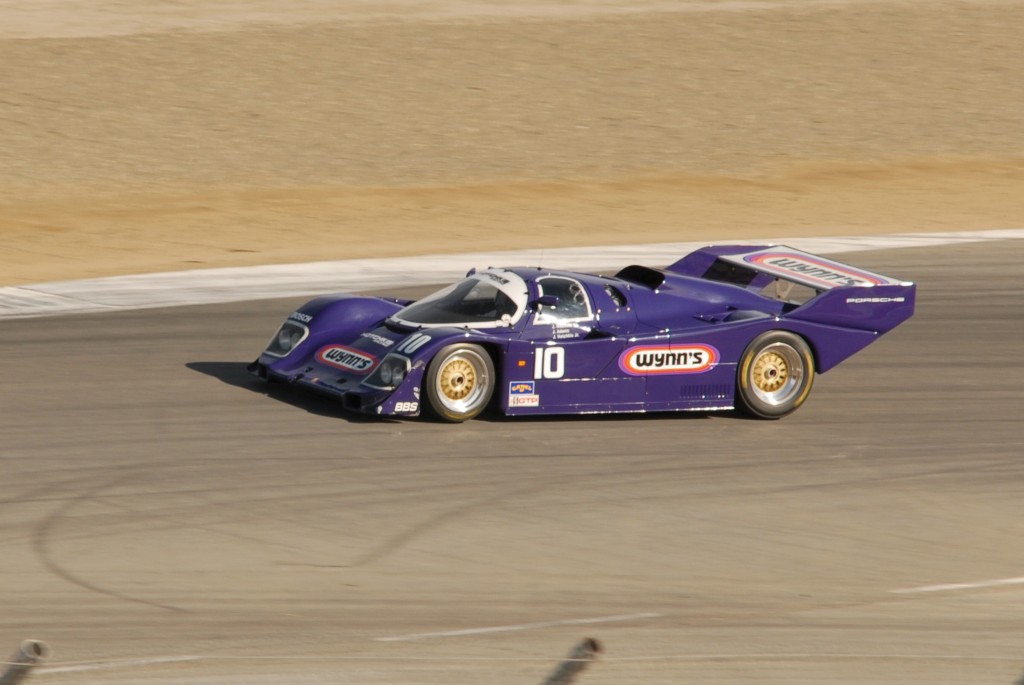 It appeared regularly at Historic Sportscar Racing events on the East Coast from 1998 to 2001. Following an accident at Road Atlanta in 2002, the car was rebuilt once more, using a new Fabcar tub (still as F01). Most recently, it won the GTP category race at the 2009 Monterey Historics, and in 2011, it was running near the front of the pack at Laguna Seca’s Rennsport IV Porsche festival until its older tires began to overheat and lose grip. 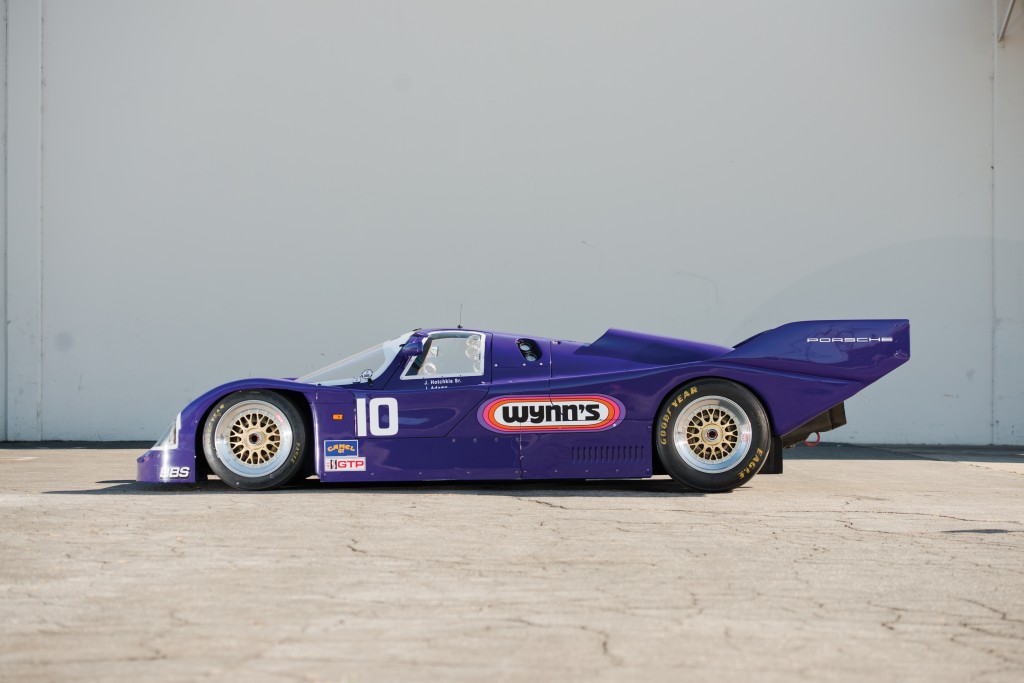 This car is currently powered by what the consignor describes as a period-correct, latest-spec 3.2 single-turbo 962 engine built by Porsche Motorsport North America. The powerplant utilizes new Porsche 911 GT1 technology, including a forged crankshaft and lower end. With its two-valve heads, Garrett turbocharger, air-to-air intercooler, and Bosch Motronic fuel and ignition management system, the engine is estimated to produce a healthy 750-plus horsepower. The power is delivered through a Porsche five-speed transaxle and Metalore axles, and it is said to be stronger than Porsche’s original equipment. The four-wheel disc brakes are from Brembo, and the shock absorbers are by Penske Racing. A new body shell, which replicates the original 1986 IMSA long-tail design, was fabricated by Pete Ebell and Porsche Motorsports.