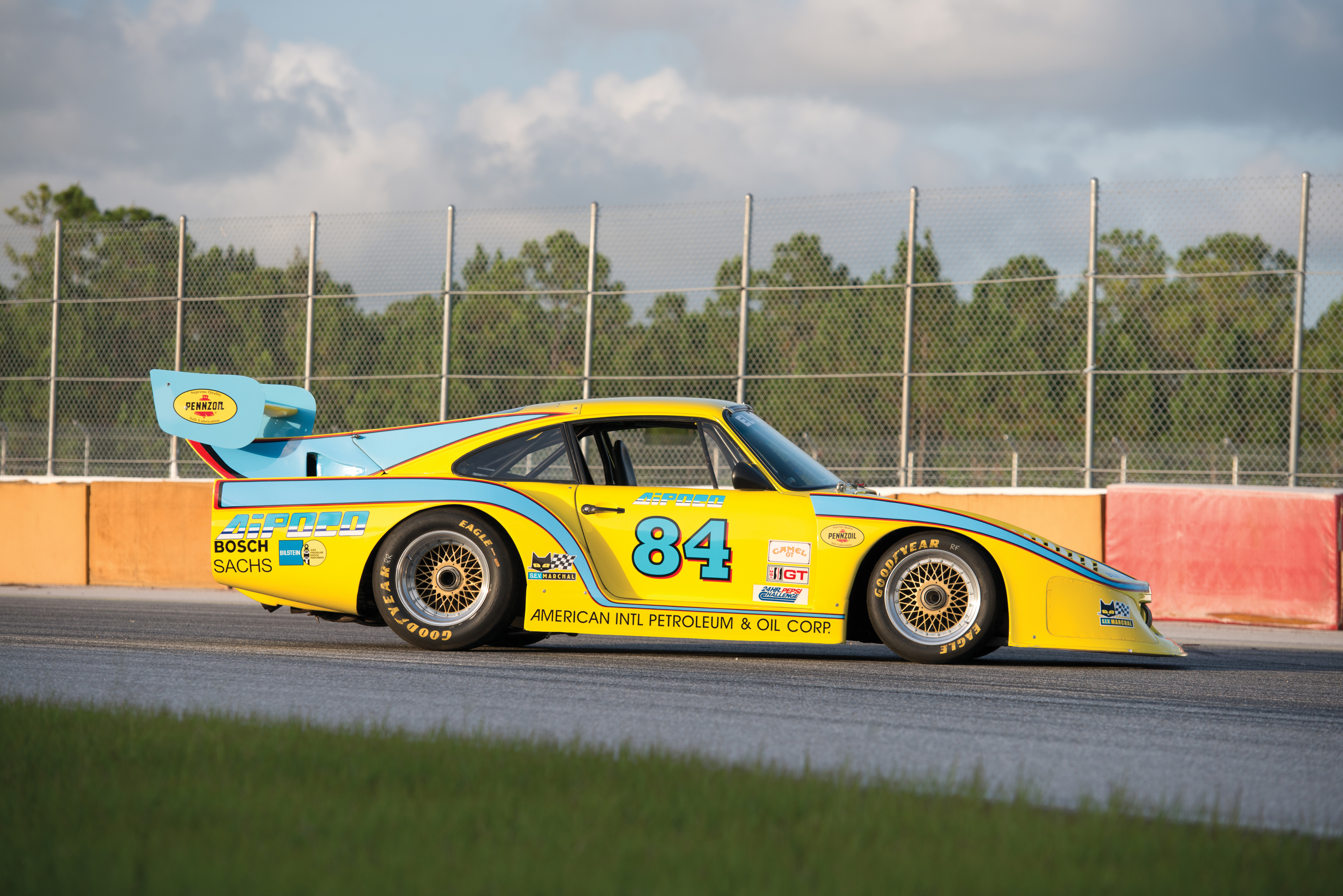 Here is another excellent example of a factory-built, production-based Group 4 single-turbo racing car that evolved over its competitive career to 934.5 and, later, full 935 specifications for IMSA and Group 5 events, and it has enjoyed a long and colorful life. This chassis started as one of the original 31 cars built by the factory as a 934 for the 1976 racing season, and it is presented here in its 1981 Daytona 24 Hour form and livery. 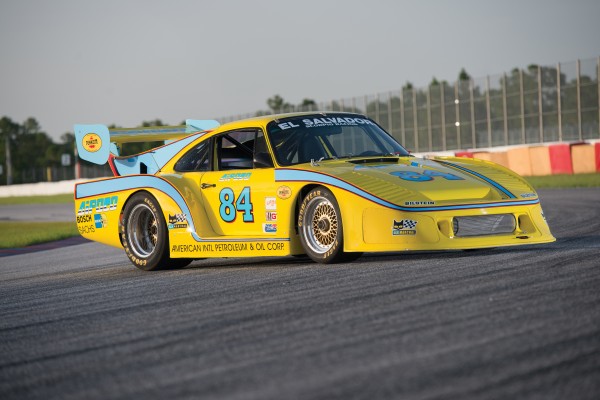 It is believed that 930 670 0171 was originally sold to the German George Loos team (GELO) prior to being acquired by Swiss privateer Claude Haldi, who was a veteran of many races at the famed and grueling 24 Hours of Le Mans and was highly experienced at the mountainous Nürburgring circuit. Haldi was a consistent competitor in European road racing, hill climbs, and the Monte Carlo rally. 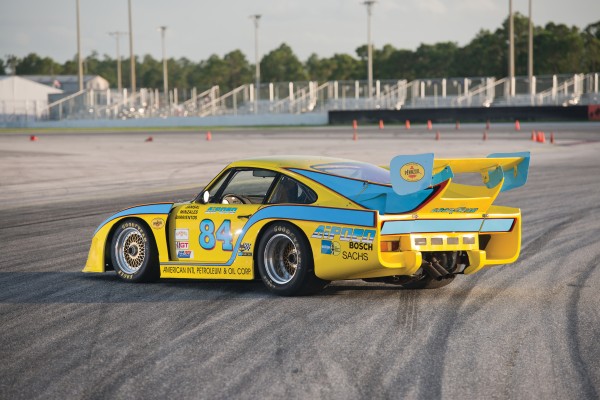 This car’s initial outing was May 30, 1976, when Haldi and co-driver Marcus Hotz finished 4th at the Nürburgring 1000 km race. The Le Mans 24 Hour race was next, with Haldi entering the car with fellow Swiss racers Peter Zbinden, Bernard Cheneviére, and Nicolas Bührer, and with sponsorship from GVEA/Porsche Club Romand. The car qualified 28th and ran very well, but it was sidelined with a valve issue on the 270th lap. Later that June, Haldi and Zbinden drove 0171 in the 6 Hours of Zeltweg and finished 1st in class and 3rd overall. In July, Haldi was 4th in the Deutsche Rennsport Meisterschaft (the German Sportscar Championship) race at Diepholz, near Bremen. That September, Haldi teamed up with Herbert Müller at the Dijon 6 Hours, where they finished 5th. Next was the DRM race at the Nürburgring, where the car did not finish; the Euro GT race at Imola, placing 7th; another DRM race at Hockenheim, where Haldi was 8th, running under Vaillant/Kremer sponsorship; and finally, a DRM race at Hockenheim, where he finished 6th. 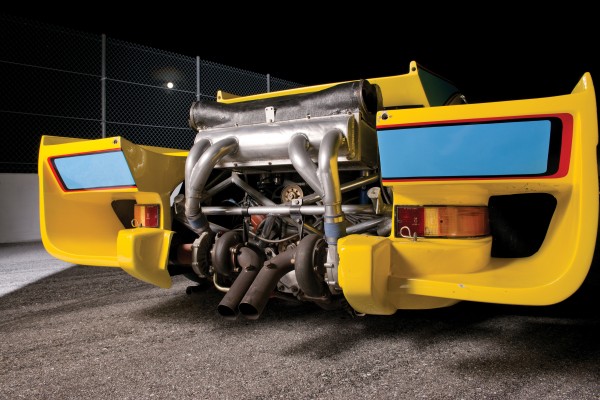 The year 1977 saw Haldi, co-driving with Laurent Ferrier, start 0171 at the 6 Hours of Mugello in March and take a good 7th place, with Kruse Schiller Motorsport serving as the entrant. May 15th found the car in England, where Haldi partnered with Reinhold Joest for an 8th place at the Silverstone Six Hours, and then, again with Joest, Haldi participated at the Nürburgring 1000 km, where they topped the podium with a 1st in class. June of 1977 found 0171 again at the 24 Hours of Le Mans. Schiller Motorsport was again the entrant, but only Florian Vetsch and Angelo Pallavicini had a chance to drive. Haldi and Schiller were awaiting their turns when a gearbox failure put the 934 out after just 123 laps. 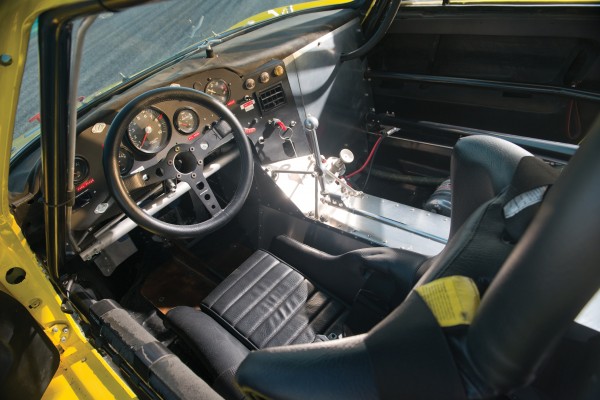 Chassis 930 670 0171 competed in numerous other races in 1977, including a pair at the Norisring (7th and 18th); a 500-kilometer event at Le Castellet in France, with Ferrier co-driving (10th); a good 6th place overall and a 1st in GT at Brands Hatch, with Pallavicini; and a 10th place at Hockenheim, with Swiss driver Enzo Calderari. The year 1978 was less successful for 0171. Still in 934 form, the car raced at April’s Dijon Six Hours with Gerárd Vial and Antoine Salamin, finishing 14th. The Swiss-based Meccarillos Racing Team backed the car at the Silverstone Six Hours in May, where French drivers Jacques Guéren and Jean-Pierre Delaunay DNF’d after spinning the car. Another trio of drivers attempted, without success, to qualify the car at Le Mans. 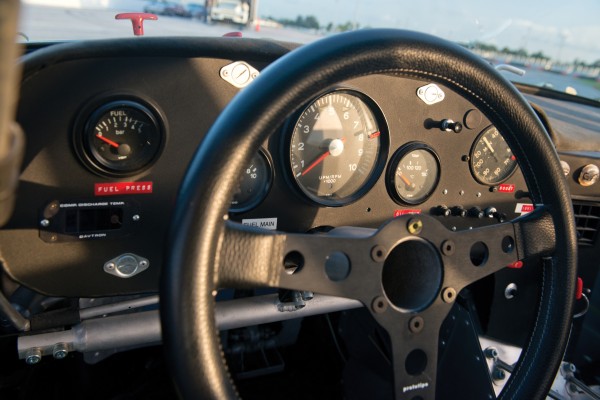 According to the consignor, Haldi’s interest had increasingly shifted toward the newer Porsche 935. The older 934 was leased out and eventually sold to the Minister of Sports for El Salvador, Enrique Molins, who raced the car in IMSA and the Caribbean series in North and Central America. The car was gradually upgraded to 934.5 specification, a common occurrence to keep the 934s competitive. It was in full 935 mode for the Copa Mexico SCCA Trans-Am event at the Autódromos Hermanos Rodriguez in Mexico City in November 1978. Molins finished a credible 10th under the pseudonym “Jamsal.” 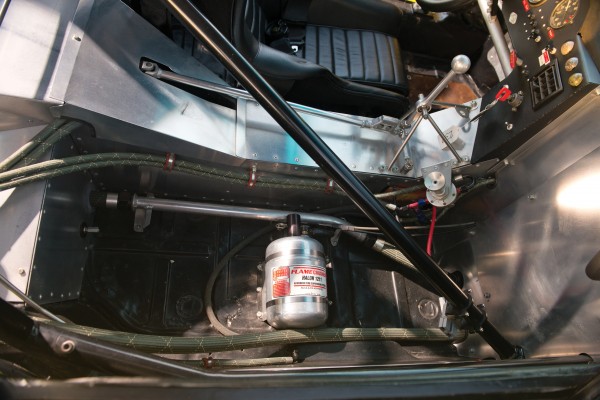 The consignor says this car, by now in 935M16 form, was widely raced in Central America in 1978 and 1979. The Whittington brothers, Bill and Don, of Florida, shared 0171 with Jamsal at the El Salvador 6 Hour, where Don clinched his 1979 World Endurance Drivers’ Championship with an overall victory. Molins then tried his luck with IMSA, entering the Paul Revere 250 at Daytona in 1980. With Eduardo Barrientos co-driving, the car finished 17th, eight laps behind the winning Dick Barbour-entered 935K3/80 of John Fitzpatrick. 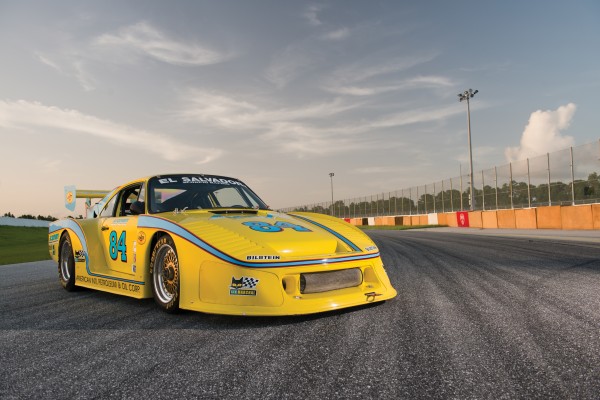 Molins continued to run 0171 as a 935 at various IMSA races through 1981, as the car was uprated by noted race car constructor Chuck Gaa. Its best result was an 8th place at the 1981 Daytona 24 Hours with Barrientos and Mandy Gonzales. In 1982, the car is shown as having reverted to 934 specification; in that form, it ran a few races in 1982 and 1984, but it was more active in 1985, completing three events, the best of which was a 9th place in GTO at Miami. Jamsal bettered that result at Miami the following year, recording an 8th place. The car appears to have been retired after that race.