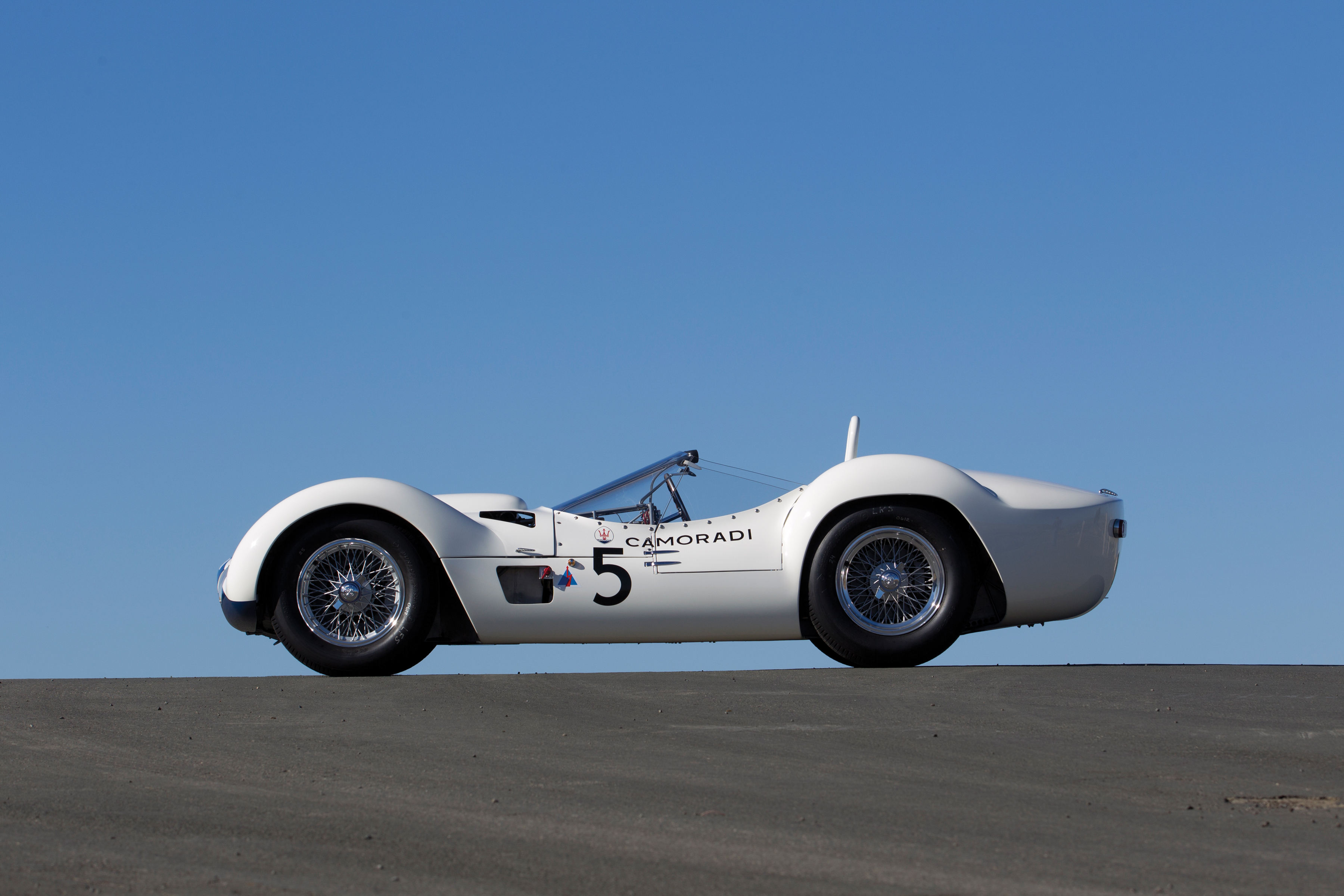 By the late 1950s, the bulk of Maserati’s impressive racing history lay behind it, as the manufacturer struggled to reconcile the expense of competition development with profitability. Yet, despite withdrawing from factory-sponsored motorsports in 1957, one last hurrah remained on the horizon for the Modena automaker, a fitting exclamation point to its stellar competition pedigree. 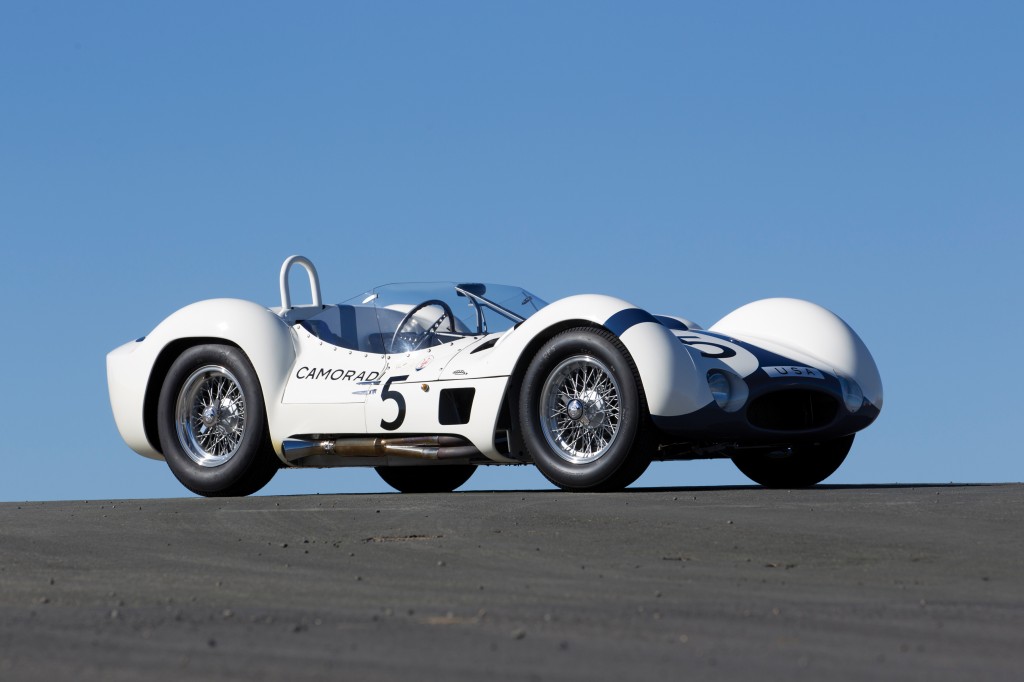 Beset by the cost of engineering a brand-new engine, or building expensive V-12-based cars in any number, Maserati continued developing the sturdy two-liter inline four-cylinder unit from the 200S sports racer. This motor was not prohibitively costly to manufacture, and it would allow them to create a new sports car for privateers. Maserati engineer Giulio Alfieri designed an innovative new chassis, employing a lattice frame of small-diameter tubing, which ensured rigidity with minimal weight (an astonishingly nominal 66 pounds). Though designated initially as the Type 60, the novel chassis was nicknamed the “Birdcage,” for the obvious resemblance, and the evocative moniker has resonated ever since. Alfieri mounted voluptuous factory bodywork over the cutting-edge space frame, and, with the engine canted at a 45-degree angle to lower height, it revolutionized the exterior appearance of sports racers of the period, proving to be highly influential in the years to come and iconic today, as it is among the last to feature the traditional front-engined configuration. 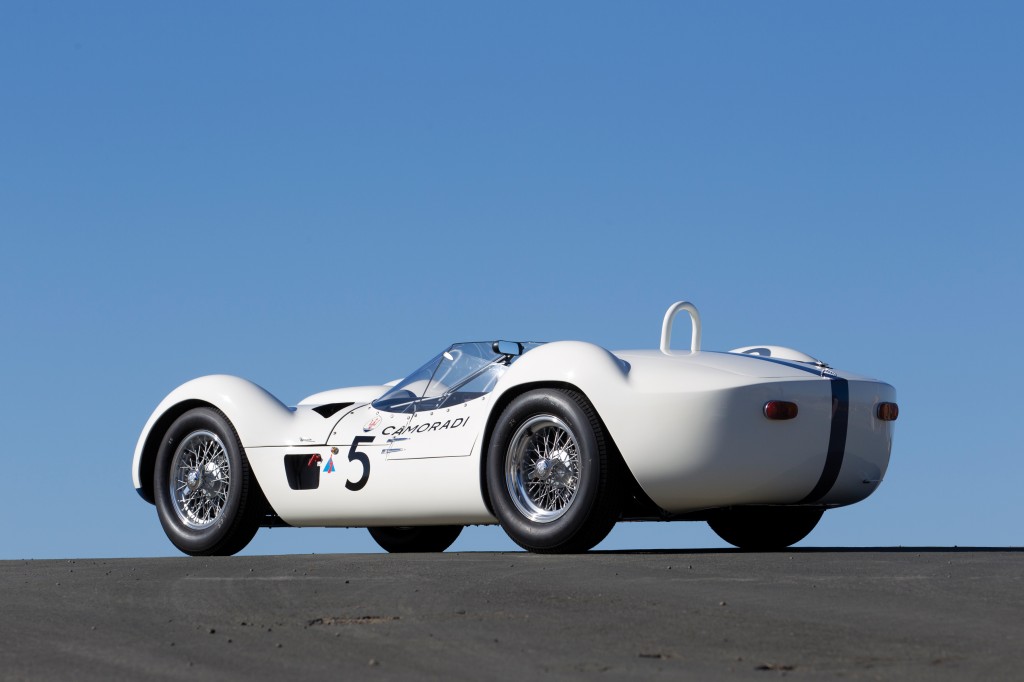 The prototype Type 60, chassis number 2451, debuted with factory sponsorship at the Coupe Delamare Debauteville on July 12, 1959, with none other than Stirling Moss at the wheel. In its very first contest, the Birdcage took 1st place overall, setting the stage for a remarkable run. Maserati soon began experimenting with a version of the engine that had a larger displacement, resulting in the three-liter Tipo 61 cars, which began delivery to customers in November 1959. At least one Tipo 60 example was eventually upgraded to Tipo 61 specification, and, as with many such race cars, the two models have essentially come to be regarded almost interchangeably, with 22 total examples collectively produced between 1959 and early 1961. 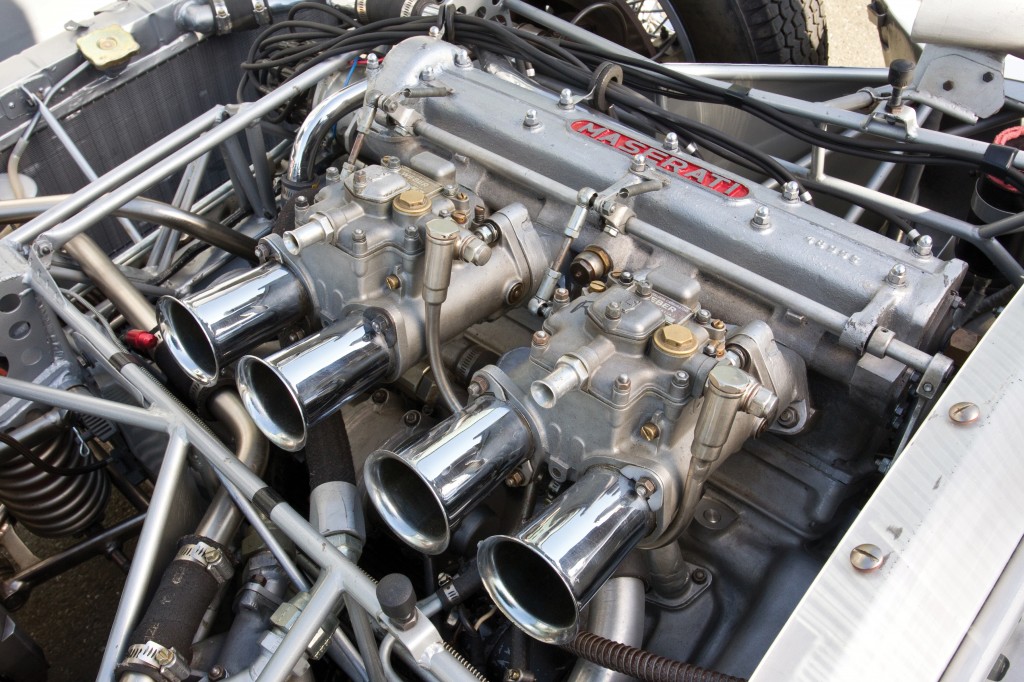 Chassis 2461 was the 11th Birdcage example produced, and it is believed to be the first Type 61 equipped with the larger 14-inch front brake discs. Of particular significance underpinning the model’s competition record is its original ownership by one of the central figures in the Birdcage legend, Lloyd “Lucky” Casner. As a dashing pilot and car dealer based in Miami, Mr. Casner became an early proponent of the Birdcage, buying the used factory prototype (chassis number 2451) for his new racing squad, the Casner Motor Racing Division (abbreviated with Italian flair as the Camoradi team). Entered at the Nassau Speed Week in early December 1959, and driven by Carroll Shelby, 2451 retired early, but Gaston Andrey’s strong performance in s/n 2455 sufficiently impressed Casner to order three more cars, chassis numbers 2458, 2461, and 2464. 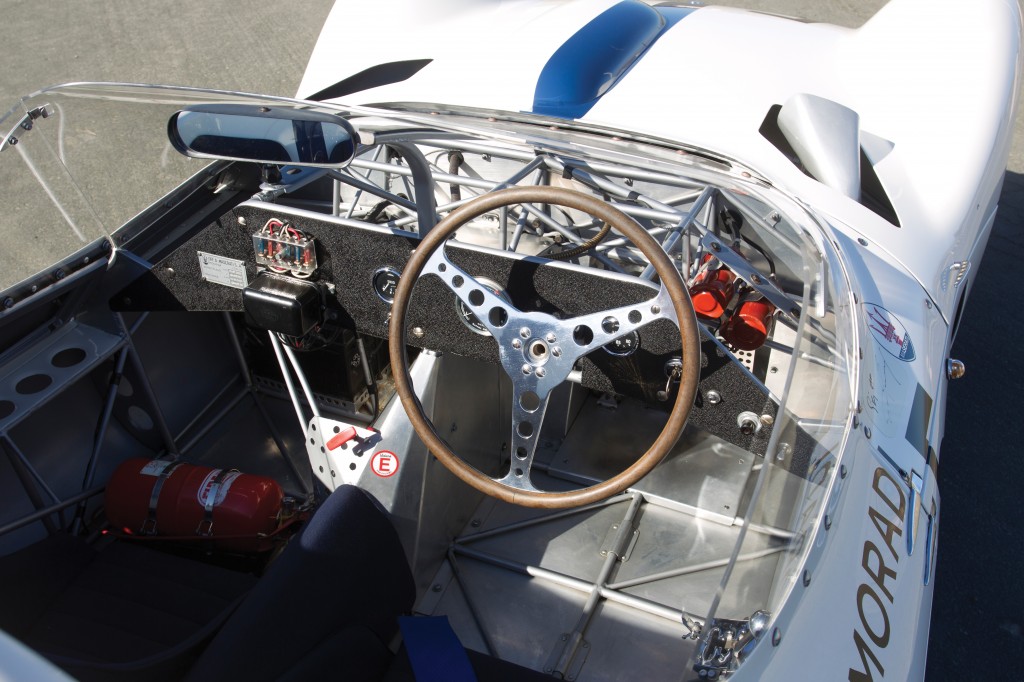 Of these three examples, 2461 proved to be the most effective, spearheading Casner’s win at the first of the two major Sports Car Championship races, which would establish the Birdcage’s credentials for a generation of competitors. Delivered on March 20, 1960, chassis 2461 was to debut for the Camoradi team at the 12 Hours of Sebring, but, unfortunately, driver Jim Rathmann blew the engine during practice before the race. Fortuitously, the motor was replaced in time for the Nürburgring 1000 km on May 22, 1960. 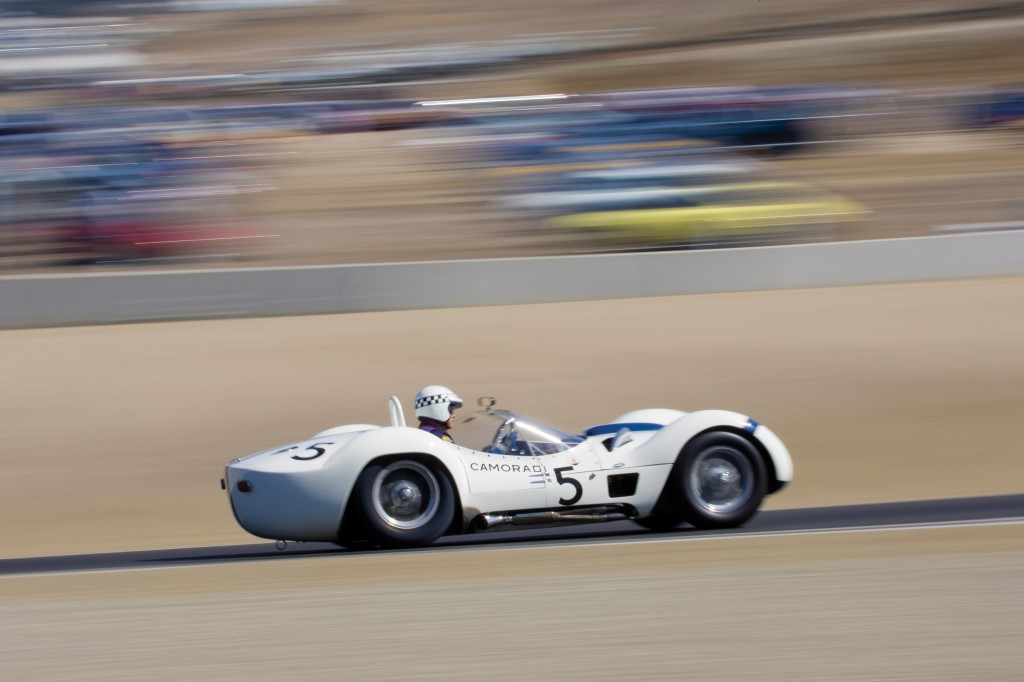 Driven by Stirling Moss and Dan Gurney, two of motorsports’ true legends, 2461 led one of the most dramatic comebacks in racing history after a broken oil pipe prompted a five-minute pit stop during lap 20. Having relinquished the lead, the Birdcage reentered the race in 4th place, with Gurney facing thick mist and drizzle. At one stage, the visibility was so poor that spectators had difficulty seeing across the track. In a dazzling and epic performance, which included overcoming cracked goggles that were smashed by a flying stone, Gurney heroically regained 30 seconds per lap and took the lead by the time he next pitted, firmly establishing him into the top rank of sports car racers. Moss was then able to maintain 1st place after resuming driving duties, propelling 2461 to its initial major victory, and one of two that would indelibly connect Lucky Casner to the success of the Birdcage Maserati. The triumph was celebrated with the feature appearance of 2461 on the cover of the May 27, 1960, issue of Autosport magazine. 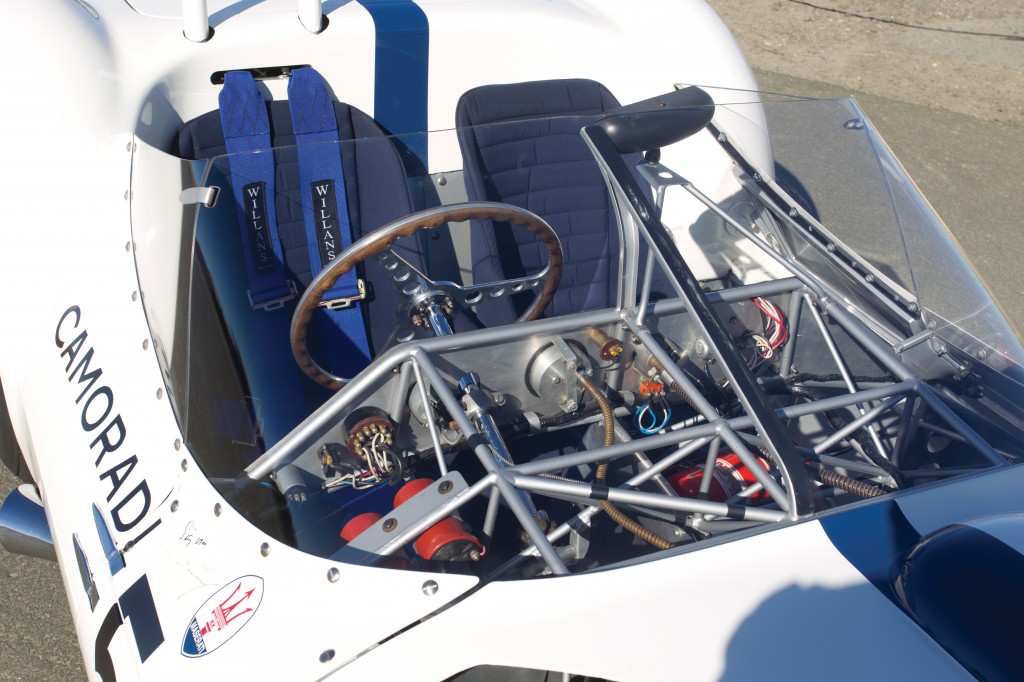 Next, 2461 was one of three Birdcages entered at the 1960 24 Hours of Le Mans, and one of at least two that featured a longer, modified tail, intended to improve aerodynamics at speed. All three cars were forced to retire early with mechanical issues. Chassis 2461 experienced one more race of note with the Camoradi team, placing 2nd overall at the Swedish Grand Prix on August 7, 1960, driven by Joakim Bonnier. Soon afterwards, the car was sold from the Camoradi stable to an American privateer.