VW dominated Barbados with 1st and 2nd place finished during both rounds of the weekend. Tanner Foust won both races and Scott Speed finished 2nd moving Scott into the lead of the driver’s championship with Tanner in second moving into the final round in Las Vegas. 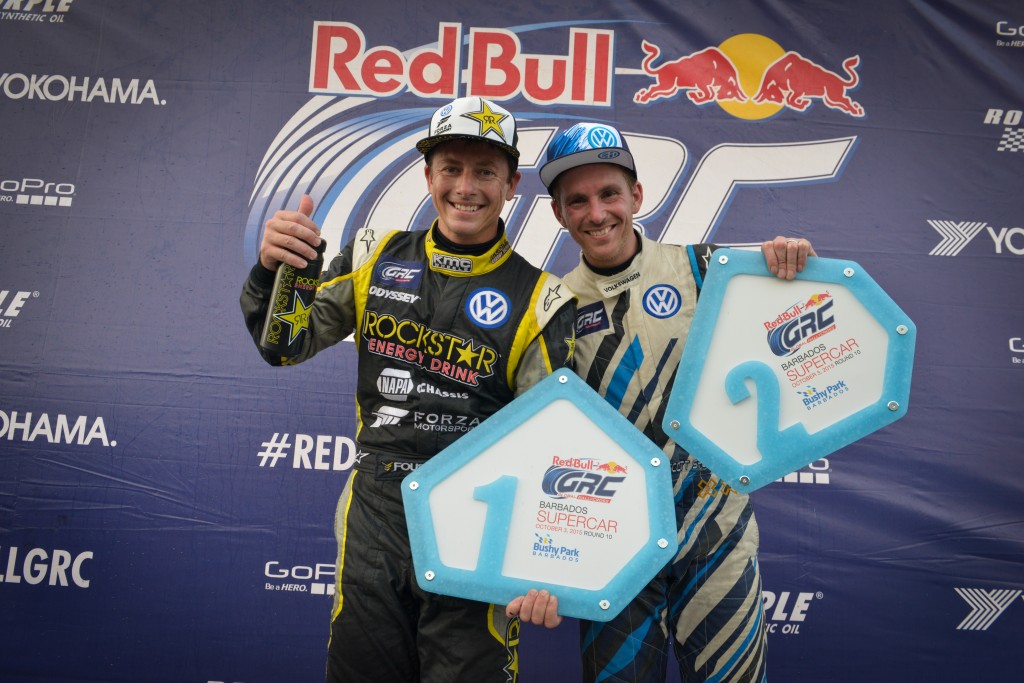 VW Andretti pretty much swept the last round in Los angeles with Scott Speed winning both rounds and Tanner finishing second on Saturday and third on Sunday. It’s pretty rare for a team to dominate a rallycross weekend let alone two weekends in a row with all the carnage and variables imposed by the heat format of rallycross.

Many say VW is cheating like they did with their diesel’s emissions. Especially because Team Andretti doesn’t touch the engines. Some german guys show up from VW and perform all he engine work. Is it possible that VW is cheating and Andretti, Tanner and Scott don’t even know? 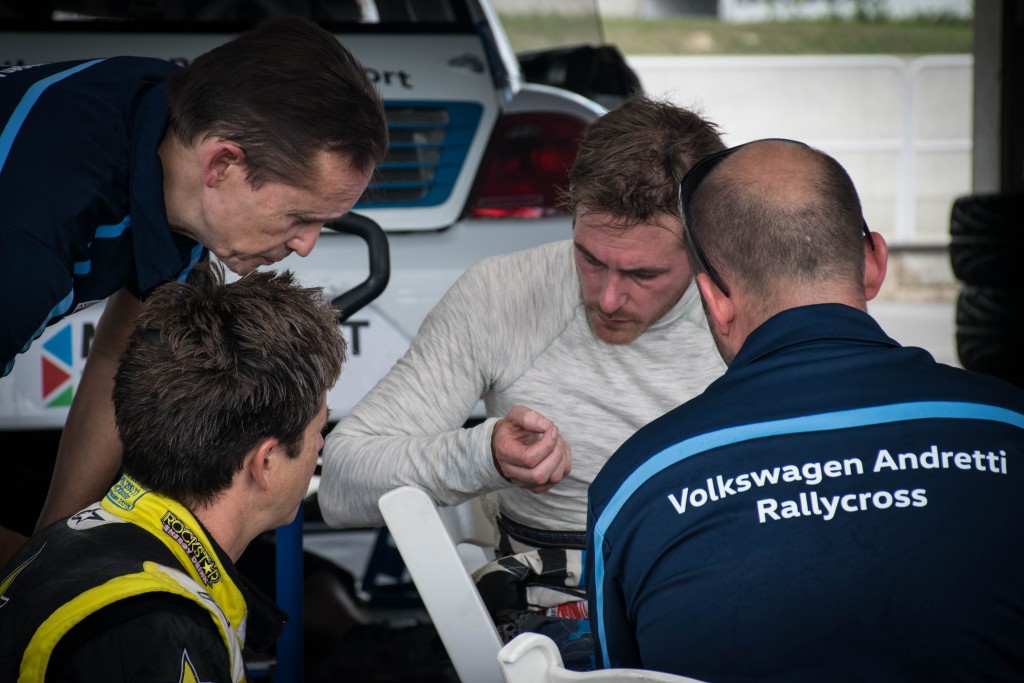 Most of the speculation comes from a launch video posted after Los Angeles showing the tires slipping and re-gripping over and over during even one rotation of the wheel. Some have said its simply the differential but non of the other teams show this effect. Mountune and Tanner have said that its a simple effect from the axles twisting… I still can’t figure out what that means. I’ve seen it in drag racing where the car will launch, the axles twist and millisecond later the car surges forward. But I’ve never seen a drag car launch with the tires gripping and un-gripping. Plus none of the other teams exhibit this behavior and their cars come from some of the top manufacturers in the sport. Maybe Andretti VW is really good and better than a dozen other teams with cars built by Msport and Subaru but to dominate two weekends in a row on top of the rumors raises a lot of questions.

For those that love VW Andretti rallycross, here is the press release and photos from the weekend.

The Volkswagen Andretti Rallycross (VARX) team scored its fourth double-podium in the second round of a double-header in Barbados, wrapping up a perfect weekend for the crew at the Bushy Park circuit. Tanner Foust scored two victories on the weekend, leaping from sixth in the points standings to second heading into the final race of the season. Scott Speed claimed the championship lead with his second place finish on Saturday, and followed that up with second on Sunday. With the pair of one-two sweeps, the VARX drivers put other competition out of reach, guaranteeing that a Volkswagen driver will win the 2015 Red Bull Global Rallycross Championship at the season finale in Las Vegas next month. 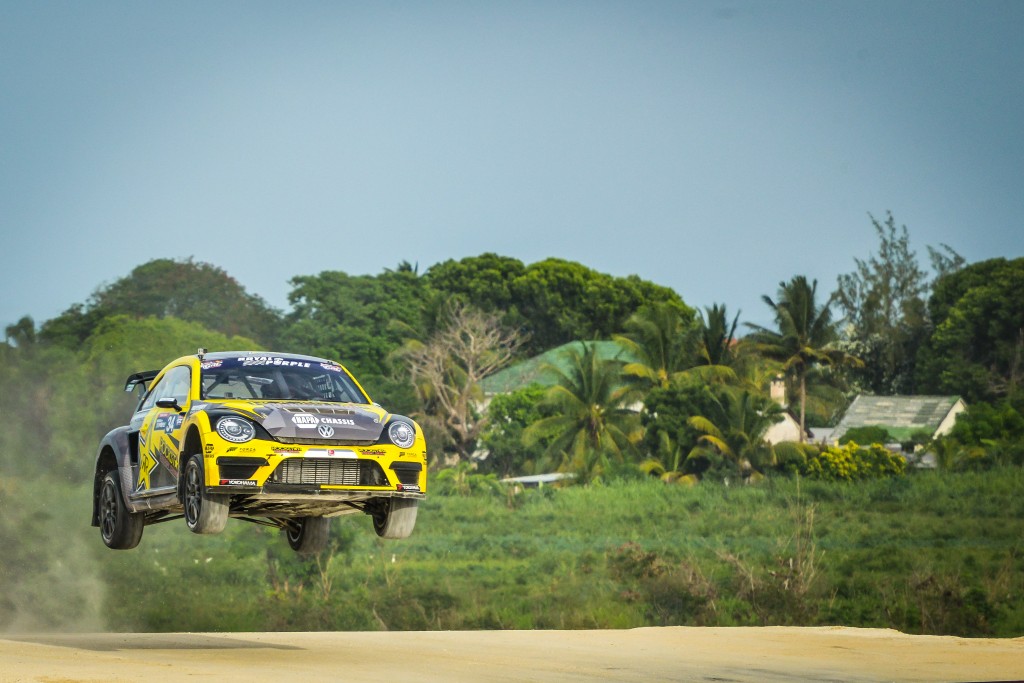 Tanner Foust found the winning form he last saw during round two in Daytona Beach, FL, claiming back-to-back wins at the Bushy Park circuit. After qualifying third quickest on Friday afternoon, the No. 34 Rockstar Energy Drink Beetle GRC moved up the pack in his Heat and Semifinal races, earning a pole starting position in the first race of the weekend. Foust ran away from the field in  race one, claiming his second win of the season and seventh of his GRC career. Sunday followed a similar pattern, as Foust steadily improved  before securing another pole position in the Final. Again, a clean start set him apart from the field and allowed him to take the weekend’s second victory. 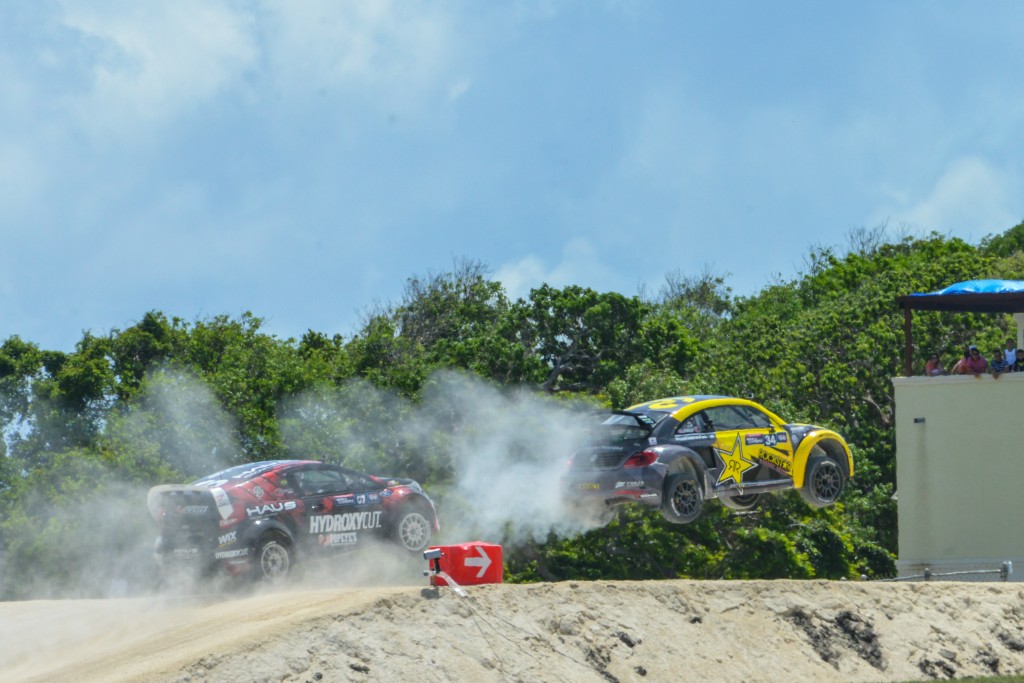 “What an amazing weekend,” exclaimed Foust after collecting his second win. “We didn’t start out as the quickest car either day, but the Volkswagen Andretti team worked incredibly hard to improve the cars, and it paid off with this awesome pair of wins! If you had told me going into LA that we’d have a legitimate shot at the championship, I would never have believed you. But, here we are, thanks to some great teamwork and perseverance” 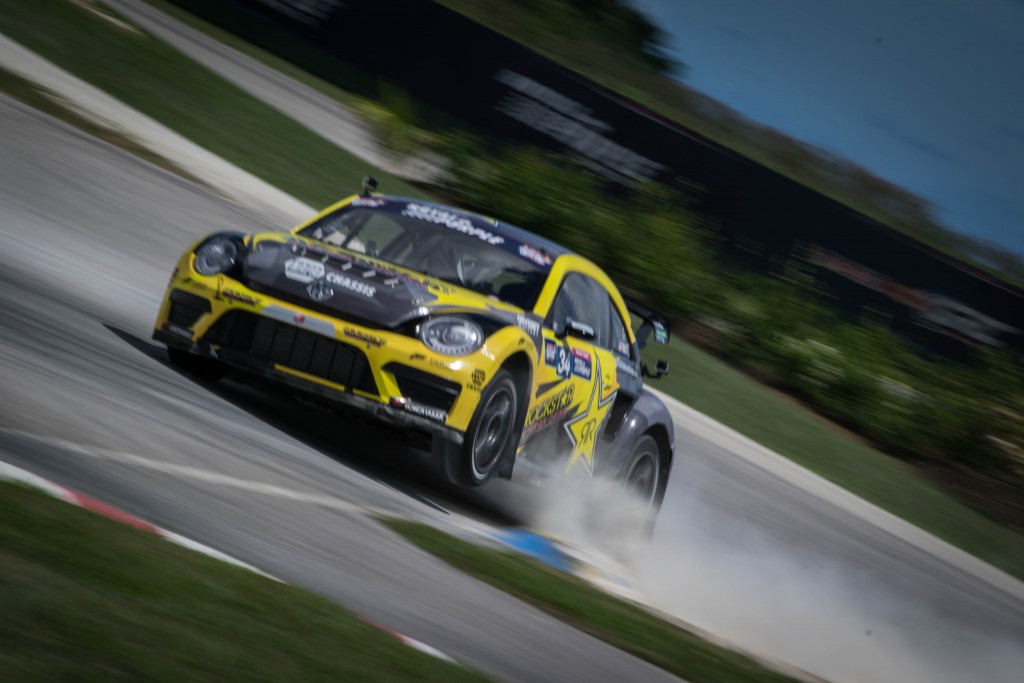 Scott Speed followed his teammate home both days, overcoming adversities large and small to earn his spot on the podium. After showing speed in qualifying on Friday, the No. 41 Merchant First Beetle GRC fought through a tough Heat and Semifinal Saturday to place third for Saturday’s Final. Speed managed to get away from the pack and followed teammate Foust closely until the last lap, when a competitor ran wide on the exit of the Joker, colliding with and nearly upending Speed. Battered and on three wheels, the Beetle GRC carried Speed around the final two corners, earning him second. 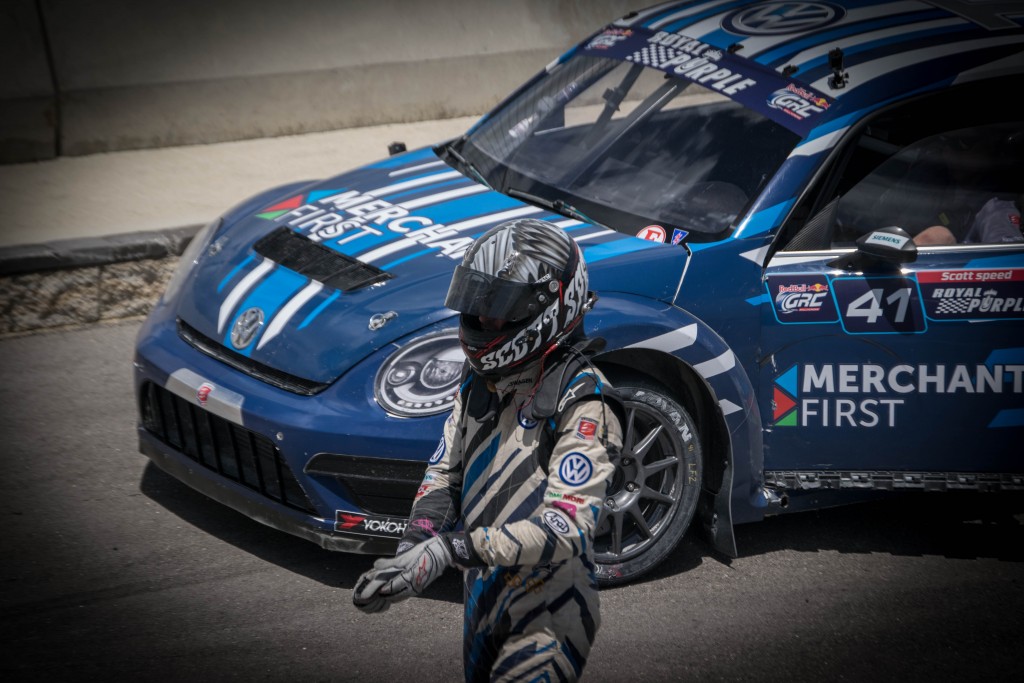 Speed set the third quickest time in Sunday morning’s qualifying session, but a puncture in his first Heat sent him to the back of the Semifinal. Charging hard, Speed earned third on the grid for the final. “I can’t thank the VARX crew enough for the hard work and long hours they put in to get this Beetle GRC back on the podium today,” said Speed after Sunday’s race. “This is another great result for the whole team and I’m excited that we’re heading into the Vegas finale with a lock on the championship for Volkswagen Andretti Rallycross.” 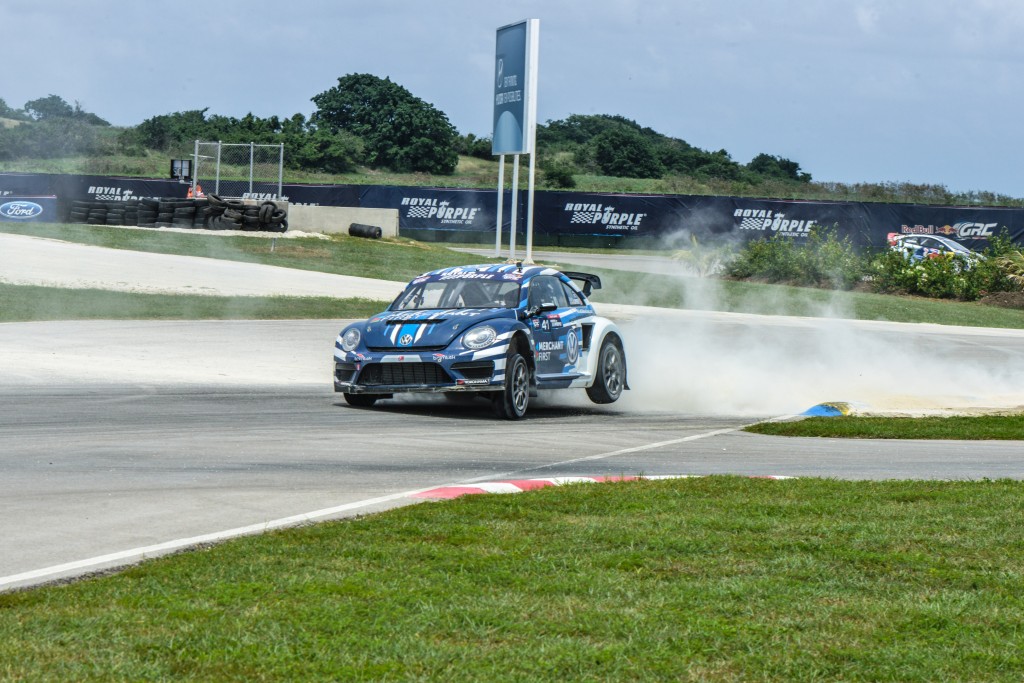 Barbados marked the Volkswagen Andretti Rallycross team’s fourth and fifth points-paying victories of the season, and the team’s tenth overall triumph in its short history. A drivers’ championship trophy will be added to that list of accolades at November’s season finale in Las Vegas, cementing the young team’s position as one of the most successful outfits in GRC history.

Available now, the VARX Supercars app is free to download for iOS and Android users, providing race fans with the perfect mobile companion to every race weekend. Users can stay up to date on schedules, session results, and live timing and scoring all in the palm of his or her hand. Search “VARX Supercars” in the App Store or on Google Play to download. 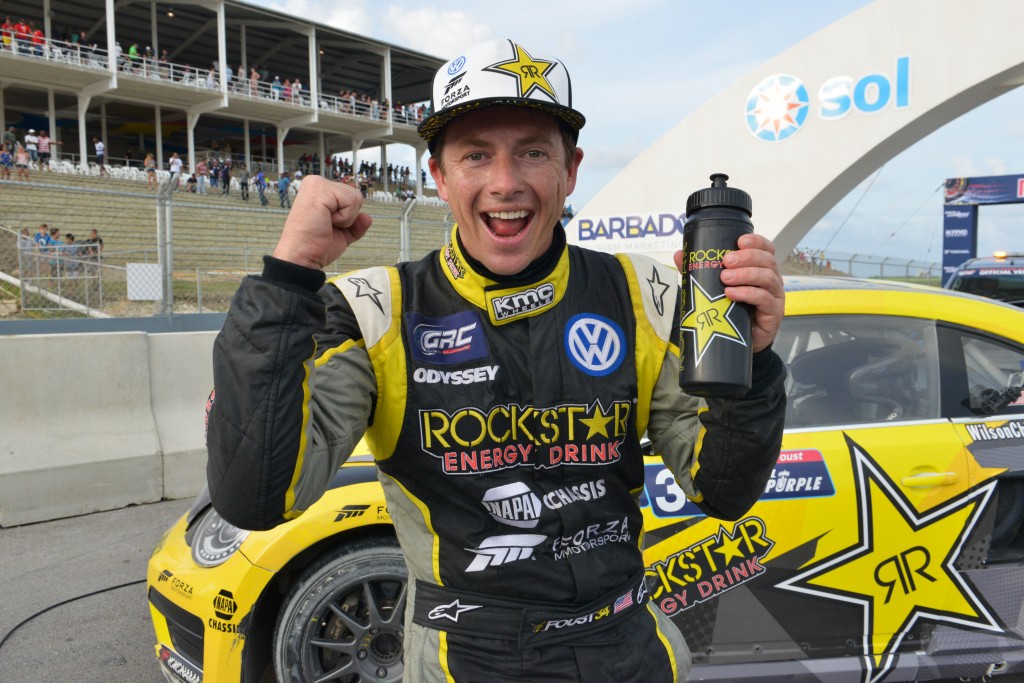