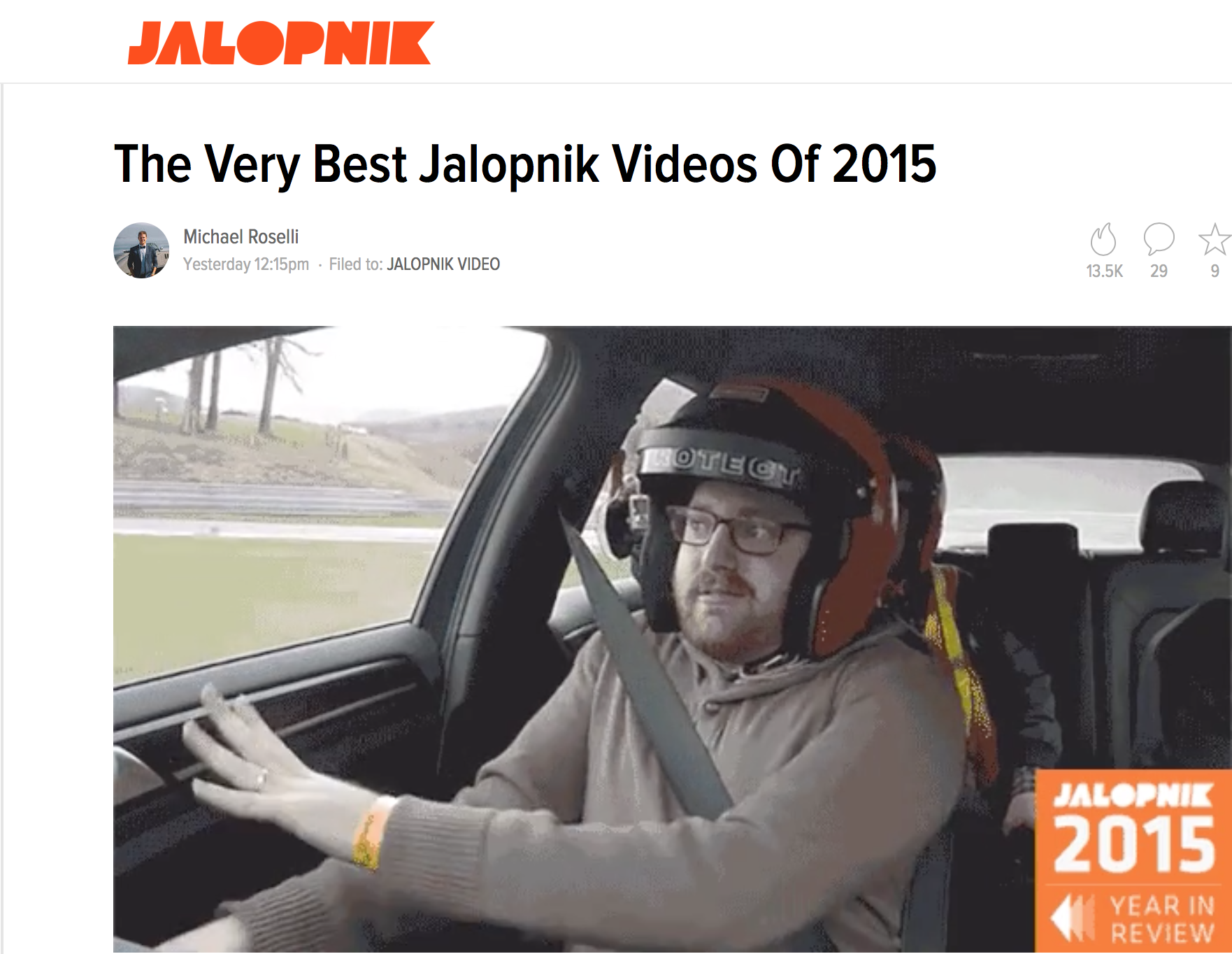 In case you missed it, Jalopnik launched a YouTube channel this year and made a ton of videos. Some are pretty amazing. They just put out a list of their favorites and I thought I’d share. Here’s their best of 2015 on video:

My Uncle Nick and I don’t always get to talk. A shame, considering he’s one of the true car guys in my family. While on the phone with him late last night, I did the math—seven months since we last spoke. He asked me, “What’s new?” I started with, “So Jalopnik started a YouTube channel…and 90,000 subscribers later, here we are.” But what happened in the middle? Here’s what I told him.

It started with Patrick crashing the Camaro, I mean, our test of the new Miata, where in just one day, likely high from repeatedly saying Jinba Ittai over and over again, we shot three different videos.

The Mazda Miata helped kick off Jalopnik Video—who would’ve guessed that would happen.

I polled the Jalopnik staff for their favorites since the Miata. Here’s what they came up with.

I spent countless hours laughing hysterically at my computer screen during the first week of June, watching esteemed editor Michael Ballaban, learn how to drive on track for the first time.

As soon as he got his bearings in the Volkswagen Golf R, we shoved him in an Alfa Romeo 4C, whether he was ready or not. Kudos to Nick Stango and Devin Clark for being able to point their cameras towards Ballaban’s very unpredictable change of directions.

While filming this, Andy Lally told me “just point the camera and I’ll drive around you,” referring to the sick car-to-car B-roll shots that comprise this video. The commenters especially enjoyed what happened at the 2:31 mark.

There were so many things that could have gone wrong, but Ryan was right—his 500 horsepower Scion FR-S deserves the Vermont plates it wears so proudly. I’m don’t know when I’ll be able to hear a turbo’d 2JZ scream past me in the Holland Tunnel again, but it needs to be soon.

Should You Buy A Used Exotic?

Doug DeMuro may have owned a Ferrari once, but who cares what the host thinks. That’s what we have guests for!

Resident supercar experts Jeannette Klein of Classic Car Club Manhattan and Bloomberg’s Matt Miller joined Doug in his mom’s basement to discuss. Fast forward to 11:46 for my favorite reason as to why buying used is the right thing to do.

Andrew Collins is the most gracious of hosts, so when Tavarish and I showed up at Truck Yeah’s NY headquarters, we felt right at home. We spent the day wrenching on Andrew’s barn find, a 1964 International Scout, with one goal in mind—make a video from it. I hope you enjoy watching this as much as we did making it.

Raph Losing It At The Quail

Seriously, Raph lost it. I lost it. The commenters said we were acting, but frankly they’re giving Raph way too much credit there.

This video is proof that seeing the most priceless and pedigreed motorsports vehicles in all of history can completely break a human being down mentally, and physically. Just watch it again while Raph and I try to forget it.

Ballaban In An Ariel Atom

When invited to drive a car as track-focused and as intense as the Ariel Atom 3s is, it requires a cool head, a steady hand, and smooth inputs. Why we sent Ballaban for this I still have no idea. Despite shitting my pants multiple times in the passenger seat, it was still one of my favorite videos we’ve done to date.

Yes, he really did lose the key fob in the middle of traffic. None of this stuff is scripted, we’re all just that weird to be around in real life.

As Hardigree said, “we’re in the secret telling, not secret keeping, business.” This episode of Jalopnik Investigates has the biggest cast out of any Jalopnik Video and I can assure you, we paid none of them.

Devin Clark also worked wonders with graphics and animations, which really made the otherwise dull history of the road come to life.

If you haven’t seen this, watch it. Randy Lanier has such a fascinating story, and all credit for this video tale goes to Patrick George, Nick Stango, and Jared Auslander for researching, shooting, and editing a piece we can all be proud of (even Lanier himself loved it.)

In the middle of a storied and successful racing career, Lanier was pinched for smuggling massive amounts of marijuana into the United States. After 26 years in prison, Lanier returned to the track and we were there to film it. It’s a road to redemption like you’ve never seen before.

Spinelli told this story to Hardigree and I in a bar one night and we simply could not believe it was true. Spinelli’s dad, after having missed the exit for Jersey off the Garden State Parkway oh, four or five times, just locked up and stopped the car in the fast lane on the highway.

If that’s not reason enough to love it, we animated a young Michael Spinelli sitting next to his grandma.

Truly, 100 percent, hands-down the worst car in the world. I literally could not stop filming B-roll of the Hoffman because I continued to find details that just never made sense. The Lane Motor Museum deserves a special shoutout for letting us drive pretty much whatever we wanted in their museum, and for being crazy and motivated enough to keep these things running. Jason has been making people laugh for years through his posts, I couldn’t be happier since we shoved a camera in his face and gave him his own show.

So there it is, the Jalopnik Staff’s favorite videos of 2015. What do you think? What were your favorites? What’d you hate, and what videos have you showed a friend? When I got off the phone with my uncle, I said “holy shit” because we’ve done so much in the past seven months, I almost couldn’t believe it.

Thanks to every single one of you reading this, we’ve grown bigger and faster than we ever thought possible. Season Three is around the corner, and I want that next email to my uncle to look even better than this one.