If Oregon Trail was anything, it embodied two of rally’s favorite sayings: “hurry up and wait” and “press on regardless.” 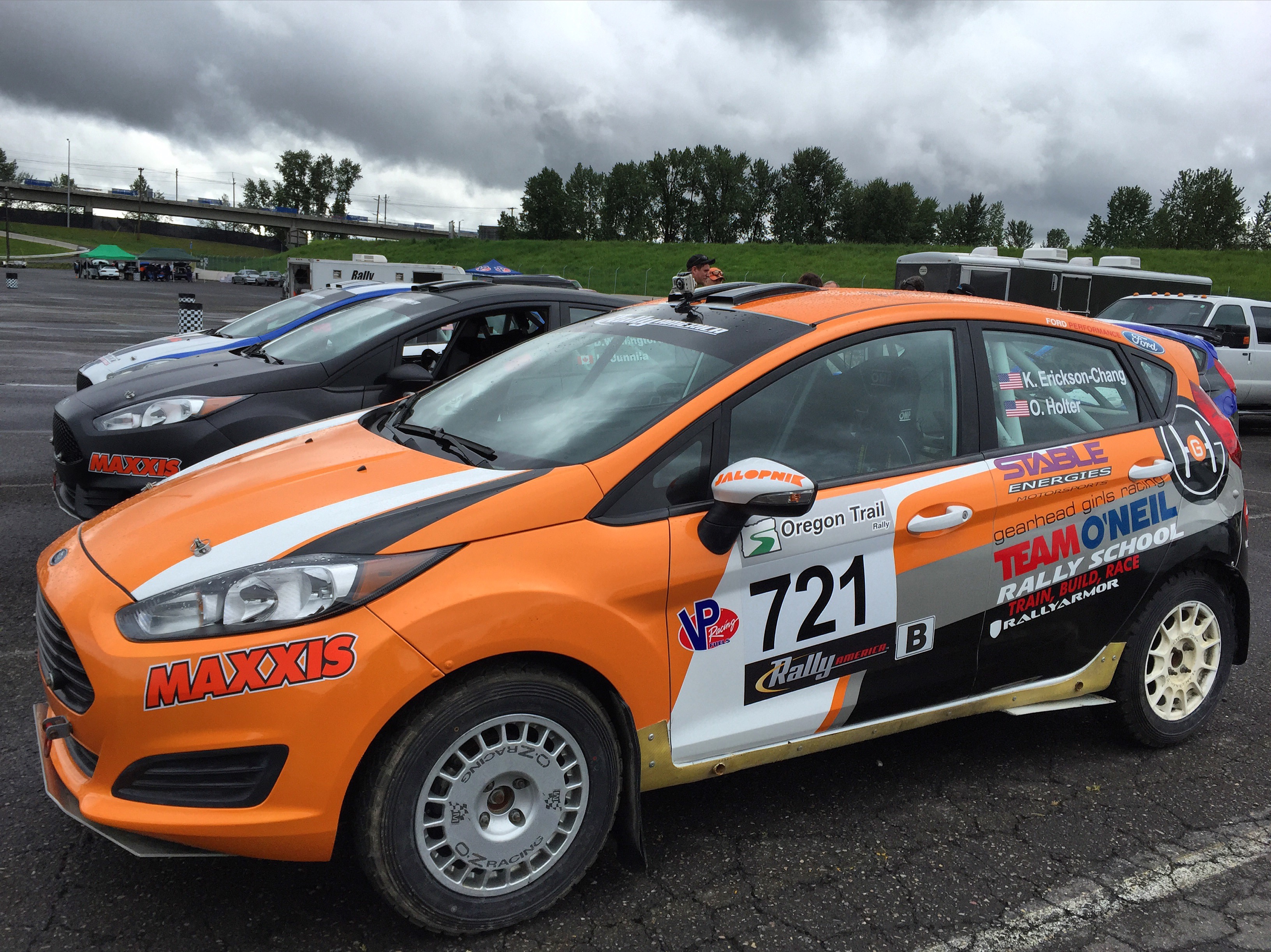 You get there, you do recce, you spend all day Friday anxiously awaiting 7pm.  OTR begins on Friday night with ten miles of super specials at Portland International Raceway.

Humour ensued in Bulletin #4, after asking chairman Doug Heredos if we would be allowed to bike the course.  If you’re wondering, Ole started out as “sharp co-driver” prior to the event, but a later slip up resulted in him being “fed to the cougar that lives on Dalles Mountain” (there’s a wildlife reserve out there) in the bulletin email that went out.  Then this: 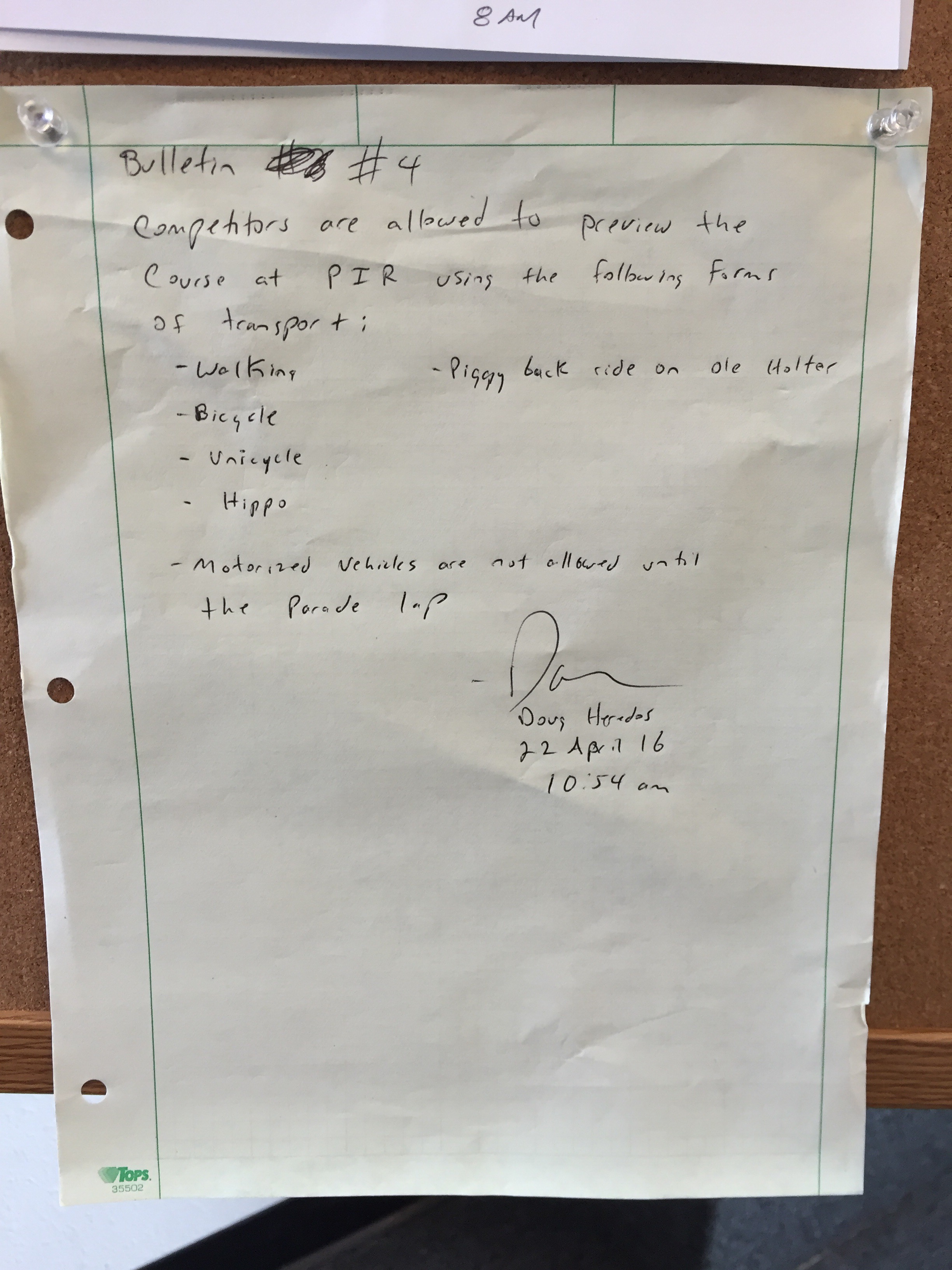 For me, having a background in road racing, PIR was a special experience.  Dirt, gravel, grass, racetrack.  Track “chicanes,” pylon chicanes.  Hairpins onto grass, hairpins on asphalt “no handbrake!”  A wonderful mixed bag, I was excited to throw out all the stops.  That is, until we made it halfway to the first corner.  At the start, the throttle pedal slipped past the car’s carbon fiber footrest… and didn’t come back up.  We were going full throttle in first gear straight towards a left three.  It turns out, the footrests sometimes slip backwards a little bit after install.  This allowed just enough room for the pedal to slip past the edge with moderate pedal pressure.  After shutting the car off, Ole got out the triangles., even though the entire crowd and start line could see us- it’s protocol!, and had to manually pull the pedal back up, something I was unable to do strapped in.  We lost about three minutes on a stage that is only about 2.4 miles to start with.  The remainder of the 5 mile leg was being careful that it didn’t happen again.  The fix?  A forty-five minute service was built in to allow competitors to get through the stages since they were built in.  During this service, we cut the bottom of the throttle pedal off. 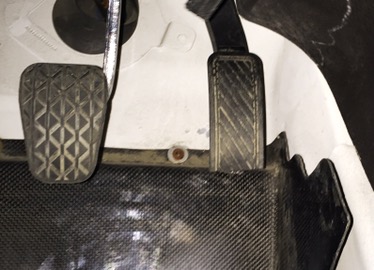 Unfortunately, there were delays after an incident on the second stage.  After a thirty minute or so delay, the last five miles of the night were completed.

Saturday brought competitors to Goldendale/Maryhill, WA.  First was the Columbia Hills stage, part of the state park of the same name.  From the Columbia River side, it climbs upwards for about ten miles, through Horsethief Butte and hills covered in wildflowers, before making a short descent.  From there, we had a short service before heading to the valley where Badger Gulch started and then head off to Oak Flats.  Another service happened before a repeat of the previous leg, but this time with Goodnoe Hills in between.  Goodnoe Hills might have hills in the name, but this is not your average hill.  The stage begins with such a high level of exposure that there are signs for a triple caution at the stage start.  Unfortunately, twice during these stages (Columbia Hills and Goodnoe) our car went into limp mode (our once thought-solved problem from 100 Acre Wood) and we lost another minute or so.  So I stopped pushing the car after Columbia Hills, which cost us more time for simply being off-pace.  Columbia Hills looks something like this (although this is actually Oregon): 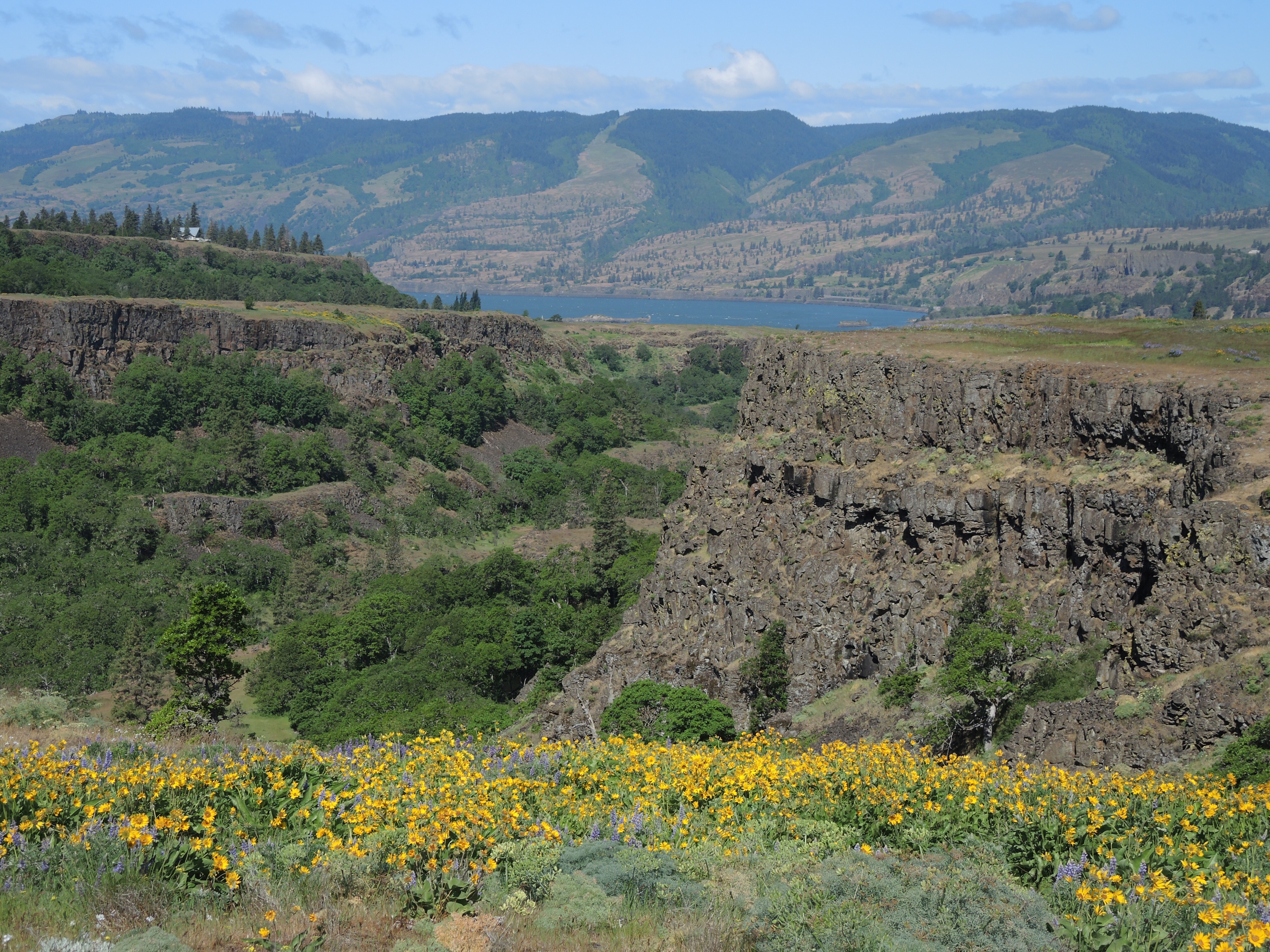 A third service for the day came next, before heading out to an all-tarmac stage, Maryhill Loops. Maryhill Loops Road is pretty historic. It is normally closed to auto traffic, but was the first paved road in Washington. Although it climbs the Columbia Hills, it’ only a 5% or less grade the whole way, with big, long, beautiful corners. The Mazda Zoom-Zoom commercials were filmed here!

We were given the okay to run street tires on the hillclimb, so we took advantage.  Leaving service, all was fine, but at the start of MHL, I yelled out “What the hell is that?!?!”  A horrible sound coming from the wheel area, not good turing right but really horrible turning left.  It seemed okay in the longer corners.  I babied it up and pulled over after the finish control checking to see where the wheels were hitting the calipers.  That had to be it.  We could see grind marks, but I would later realize that those were from intentional grinding for the fit with the 15” gravels.  Taking another look underneath back at the start, our Honda competitors took a look too.  All I could think at this point was, “What’s something else?”  We had already had enough problems.  Brian Penza suggested turning the wheel out and at second glance I noticed some striping on the axle in front of the grease fittings. We took the grease fittings off, hoping that it would maybe be fixed for our second run up MHL.  Unfortunately that wasn’t the culprit, and it later turned out that there was no metallic wear where the striping was occurring (so it likely was getting close but not really rubbing).  During the post-event re-prep, they found it- the wheel weights were rubbing on our rear shocks, which resulted in this: 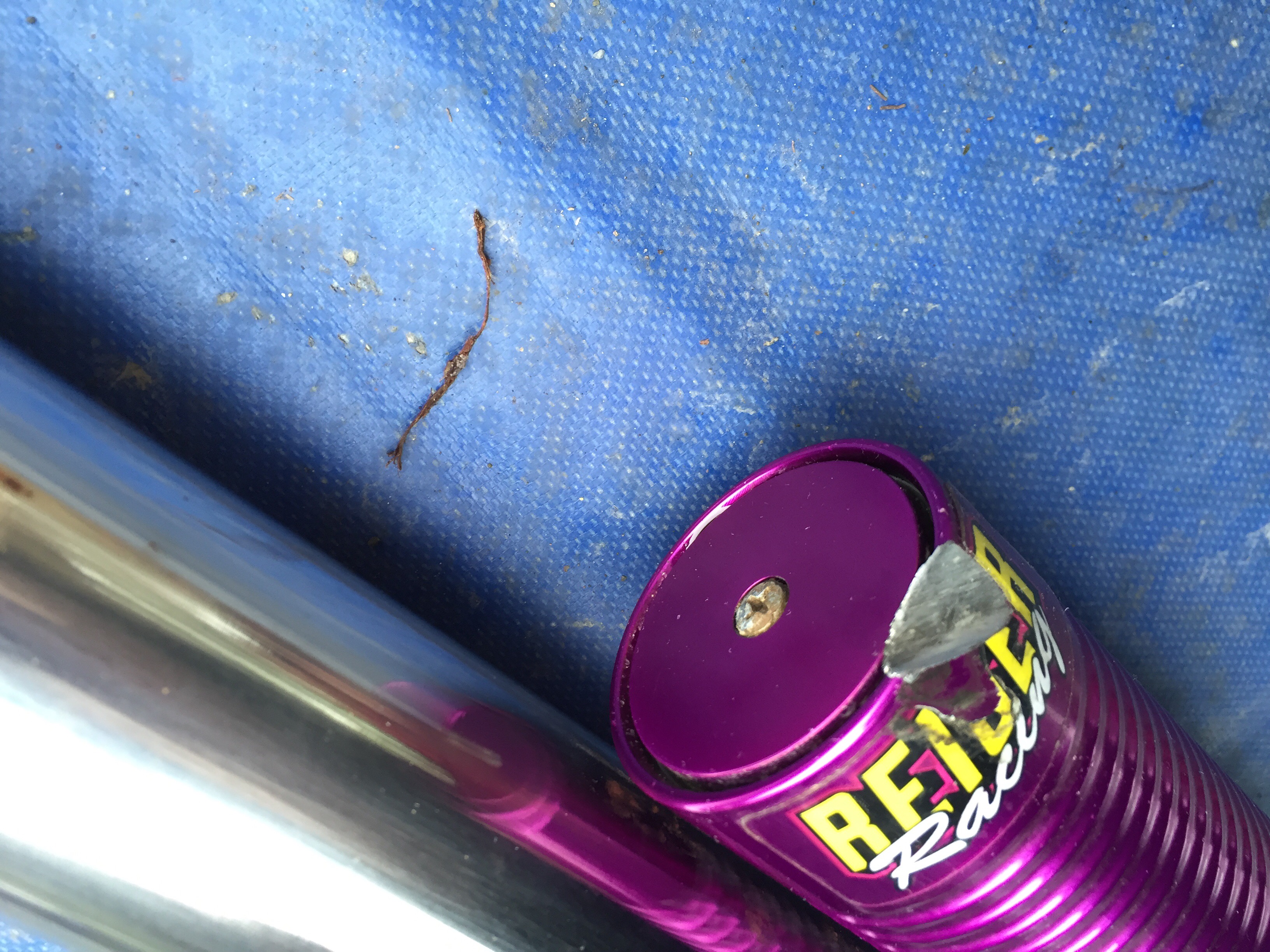 We had a chance to swing through service to get our gravels back on after MHL and the problem dissipated. We weren’t sure what it was at the time, but had chalked it up to the wheel weights hitting the struts. By the time we ran the last stage, twilight had quickly faded. Dalles Mtn is the reverse of Columbia Hills, uphill and then really fast, really downhill, really exposed (not as much as Goodnoe, though!) Even with lights, the uphill is fairly blind since the lights don’t light up the ground very well at that angle. Uphill was slow, downhill was faster, trusting the notes more and more. What I thought was a piss poor time ended up being a decent stage time, but more importantly only seven seconds behind the duo of Guitar/Penza.

Day three still began with us nearly seven minutes behind Jordan and Brian.  So having only the intention of finishing, I decided it was a good time to push the car a bit harder.  There wasn’t much of a choice to go slow since Sunday’s Dufur stages are so damn fast.  Trying not to run it up high in 2nd gear, I pushed the car harder and harder throughout Sunday’s first leg of Deere Run, New Endersby, and Boyd Loop.  At the first and only service of the day, I was filled with joy from finally getting three good stages in.

The toughest part of having a couple bad rallies when you’re just starting out is that it rips your speed factor apart and eats it for breakfast, lunch, and dinner.  This means you have an hour of waiting after first car out, are way back in Parc Expose, and worst of all, get the most degraded road conditions.  This last part is only sometimes true, however, because sometimes you get swept roads, which is an advantage.  Depending on the roads, degraded sections may nullify any advantage swept roads gets you.  I was so happy to have some decent stages, knowing I could go even faster, in sheer hopes that it would get me a better start position for Olympus. 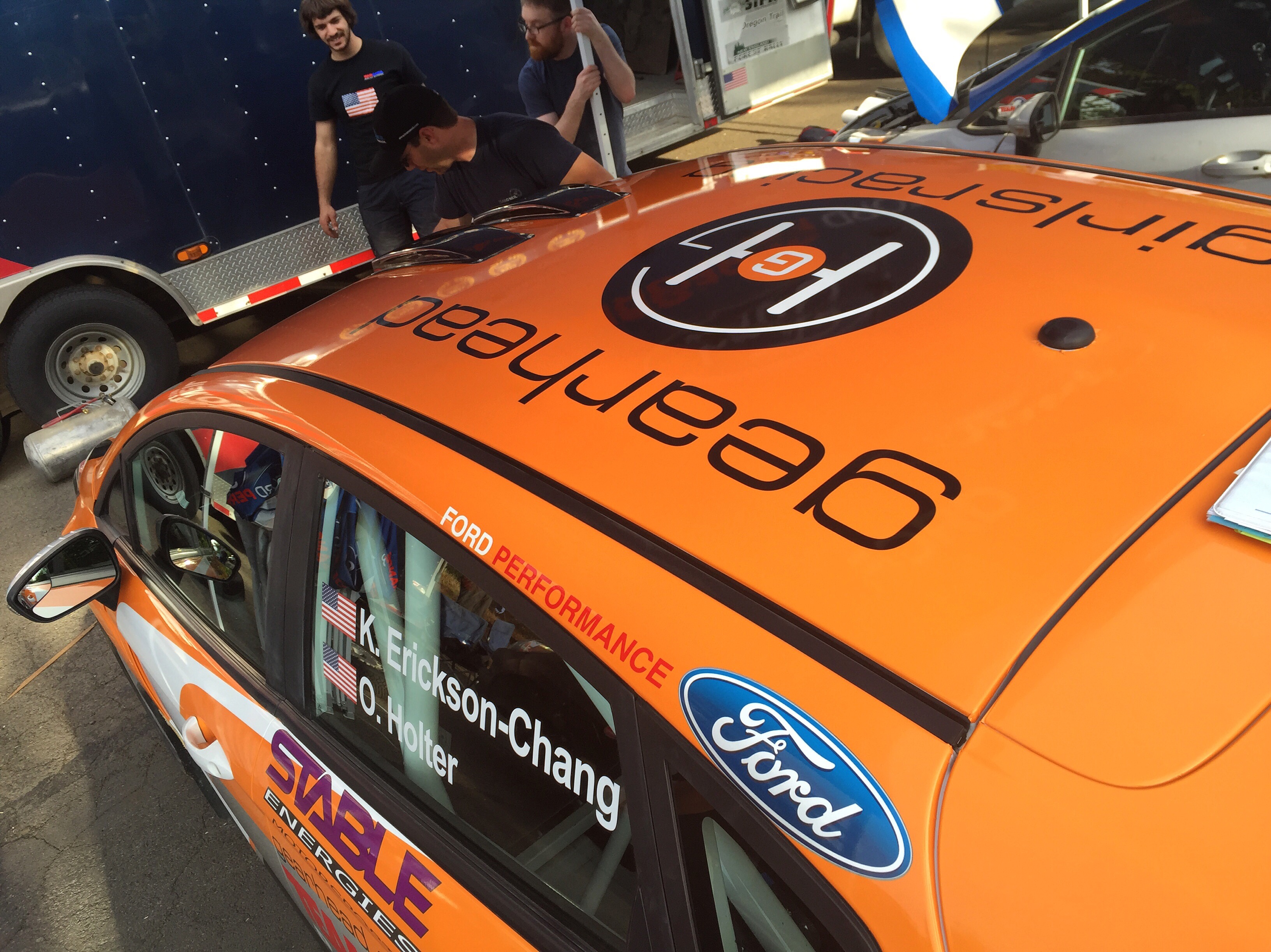 For the final leg, only two stages- Deere and Boyd- I chose to get even more creative with timing my shifts and throttle modulation; leaving the throttle depressed longer, a risky move; and carrying as much momentum as possible, leaving Ole wondering if I would make some of the corners.  Until we didn’t almost make the very last corner, “150 R3”

Brakes fully engaged, we knew before this leg that the rotors had begun delaminating, but why couldn’t they have lasted just one more corner?  Ole on the intercom repeating the right three that we’re rapidly approaching.  I look past the corner noting the burm and cattle fencing before deciding that we had slowed down just enough to make it… as long as getting sideways would scrub just a bit more speed.  And it did.  Although we lost at least a few seconds, we came out on top on that last stage, taking it twenty-one seconds faster than our previous running and just six-tenths of a second faster than our friends in the Fit. 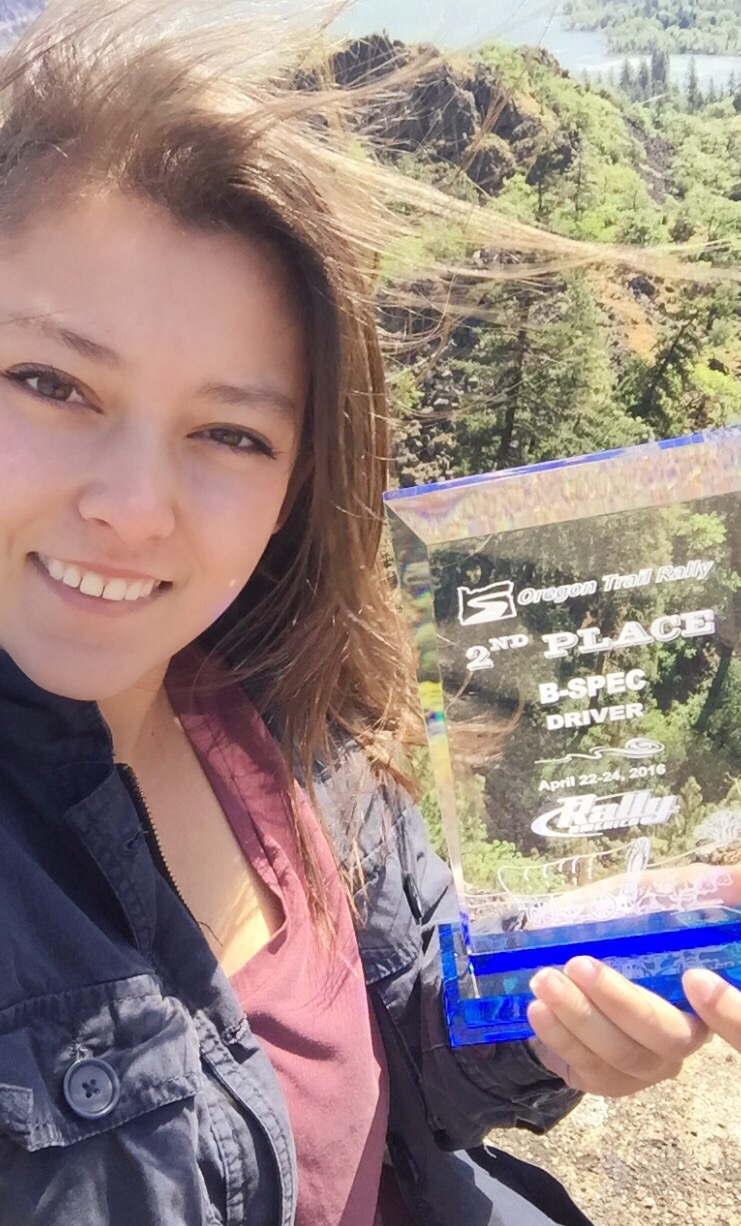 As far as the car goes, we are more hopeful than ever that it will be running correctly at Olympus, where we get a two-pass recce to write our own notes.  The stages are looking wonderfully technical, just the way I like them!