I really like the Ford Fiesta 1 litre EcoBoost. It’s stick shift only, which I think is a poor business decision, but it’s a great car.  It hit the market for the 2015 model year with a Focus sibling featuring the same engine and the requirement that drivers must row their own. This year however, Ford has added a six-speed automatic as an option with this engine in the Focus. I’m not talking about the clunky, jerky PowerShift dual-clutch either but a real, torque-converter equipped slushbox. 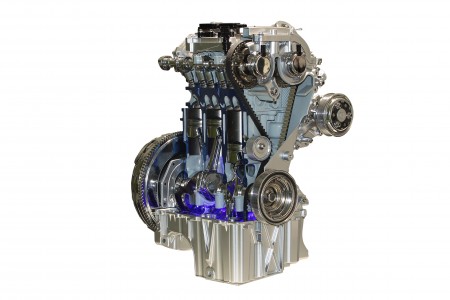 The bigger Focus is however a bit too much of a burden for the little engine that sort of could. Mr. Regular tried out the 1 litre Focus with a stick and he found it under-powered but comfortable. The automatic likely has not made it feel any peppier, and has also added a start-stop system.

The base Focus still comes equipped with a 2 litre that makes 160HP and 146 lb/feet of torque as standard. Adding this engine and a manual to the SE trim (the only way to get it) costs $495, if you want it with an automatic, it is going to cost $1,095.  What does that cash get you?Well on the automatic it also gives you four-wheel disc brakes, which on the manual, don’t seem to be an option, unless you are the guy who loaned his car to Mr. Regular. It also gets you 123HP and 125 lb/feet of torque. That’s right you get loss power and less torque. You do however get more miles per gallon.

This is a car for people who want to really save on fuel but don’t want a hybrid. Ford will still gladly sell you a normal Focus that gets 38MPG on the highway, but the EcoBoost gets 40MPG on the highway with a stick and 42MPG with the automatic.

Now I understand this engine in the Focus with a stick. It’s for people who want to buy a basic car that uses as little fuel as possible and run it into the ground. It’s also to meet government mandated fuel-economy standards. So who is going to buy the Focus 1.0 with an automatic. The cheap guys who keep cars until they fall apart buy the stick-shift, gas-sipper spec at a crazy discount because nobody else is willing to buy a stick.

The automatic now has to compete with regular cars that get great MPG like the Hyundai Elantra and Mazda3. Those both do 40MPG on the highway and aren’t gutless like the Ford.

I presume this car is for people who want a compact hatchback,  and live at high elevation, where the thin air cuts the power output of naturally aspirated engine. They also don’t want a stick or a VW Golf. Now the Cruze turbo only comes in sedan for now, just like the Civic. So until the Civic turbo hatch and Cruze turbo hatch come out, Ford has this niche to themselves.