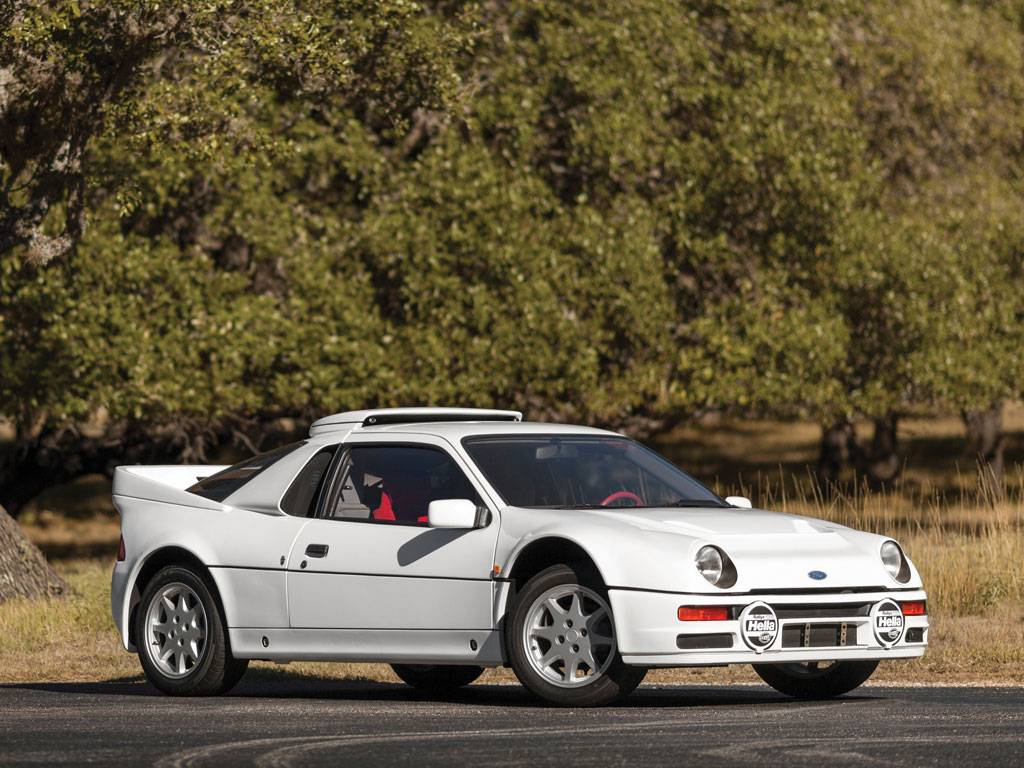 The Group B regulations fostered some of the quickest, most powerful, and most sophisticated rally cars ever built. This period of competition is often referred to as the Golden Era of rallying. Though less high profile than sports-car and open-wheel racing, modern rallying has attracted many discerning fans over the years with its point-to-point multi-leg format and highly modified, small-displacement, production-based cars. Such enthusiasts almost universally speak with glowing memories of the Group B era, when revolutionary all-wheel-drive chassis and turbocharged engines resulted in some of the most athletic cars to ever face a timer.

While Ford’s European racing concern in Boreham, England, had dominated WRC competition in the 1970s with various iterations of competition-prepared Escorts, even winning the Manufacturers’ Championship in 1979, America’s oldest carmaker dropped out of the format in 1980 to develop something that could compete with Audi’s forthcoming Quattro and the mighty R5 Turbo from Renault. A new program was undertaken in 1983 to build an alternative to the conventional front-engine, rear-wheel-drive Escort, one that would prove to be a disruption of its own. Formula 1 designer Tony Southgate engineered a brand-new chassis predicated on all-wheel drive and the mid/rear placement of a 1.8-liter turbocharged Cosworth engine.

The motor was slated to produce 250 horsepower in street guise, though in race format it could develop a shocking 420 horsepower or more. The distinctive new bodywork was designed by Italian styling house Ghia. As 200 road-going examples were required to homologate the model for WRC certification, the new creation was dubbed the RS200, and it showed tremendous promise right out of the gate with a victory in its debut race. At its first WRC contest, the car came in 3rd, portending a great future.

Unfortunately, the new Ford arrived to the party a bit late, with the model only debuting in the 1986 season after more than two years of development. Several tragic accidents compelled the FIA to cancel Group B classification after just four years, making the RS200 ineligible for the WRC after only one season of competition. In terms of its Italian exterior design and F1-bred chassis, the purpose-built RS200 is almost completely unique to Ford’s history, perhaps comparable only to their great GT40 endurance racer. Ghia’s softly curved wedge design was copied in numerous road cars of the era, and the mid-engine layout was also soon imitated by other manufacturers. Though it took no racing titles, the RS200 was an incredible evolution of the everyday sports car.

The RS200 remains a favorite of Group B enthusiasts to this day, likewise appreciated by design experts and performance connoisseurs for its disruption of the conventions of the day.CHASSIS NUMBER 169Chassis number 169 is among the later RS200 examples built and is believed to be the last car delivered from the manufacturer’s stock, reportedly sitting at the Boreham facility until August 1994. Acquired then by a Michigan-based enthusiast, the RS200 was treated to a pampered life while occasionally taken to motorsports events for display, including the Daytona International Speedway in 2010.Currently displaying approximately 1,960 kilometers, this Ford was recently acquired by the consignor. Though the car has been kept in very good mechanical condition, the grey carpeting had deteriorated somewhat from natural aging, so correct Wilton wool carpets in the original color were sourced and properly installed. This is believed to be the only non-original item in this otherwise totally original RS200.

The car is currently titled in the United States, having been properly imported during the 1990s, and is therefore ready to enjoy on the open road as US compliant. Probably one of the most, if not the most, unused of the RS200 examples produced, this car benefits from just two caretakers over 21 years and has never been run in competition. The unusual racecar is a jewel of disruption, a sensational anomaly in the Ford production output that represented the legendary Group B rally cars. For rally connoisseurs or dedicated fans of 1980s sports cars in particular, this superlative RS200 would make an important acquisition to any collection as a notable example of one of Ford’s most extreme racing creations.

If you’re serious or just have some cash to blow you can find the auction here.