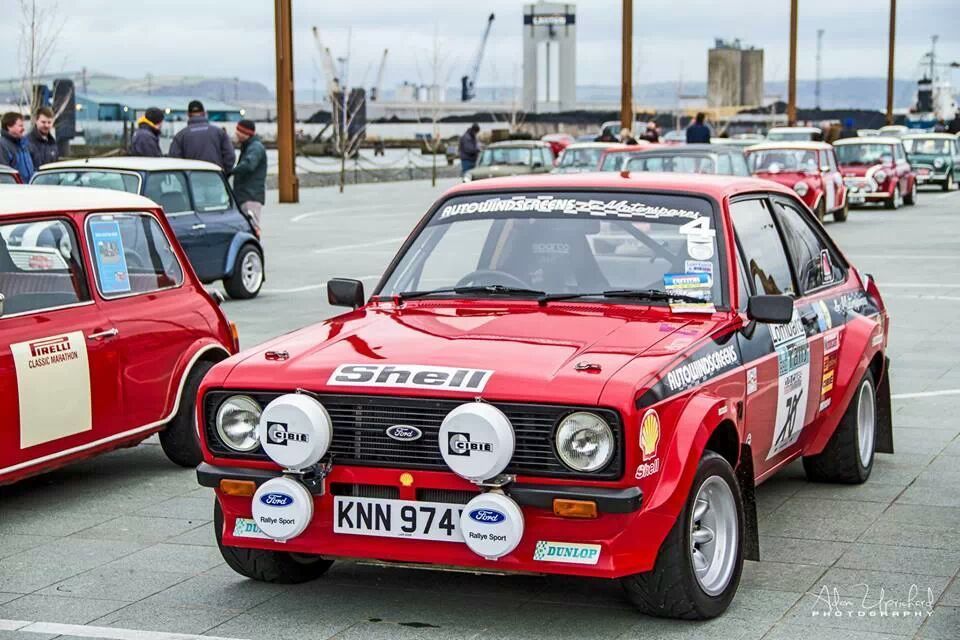 I love these cars! Rear Wheel Drive Rally Cars are for men with large balls. And the MkII Escort might be the best overall RWD Rally car ever made. And this one was featured in a magazine! I have no idea what that means or if it makes the car worth more but the seller seems to think its pretty awesome. I think race pictures of it are better. Or maybe the trophies! The only concern is the seller is keeping the spare wheels and tires meaning he is probably building a new one…so whats wrong with this one? Did he pull the fancy motor and put in a spare? Who knows. But its yours for £21,750. Oh and you need to bring a boat, because its in England. The Ebay listing is here, and the description is below for when the ad is gone. 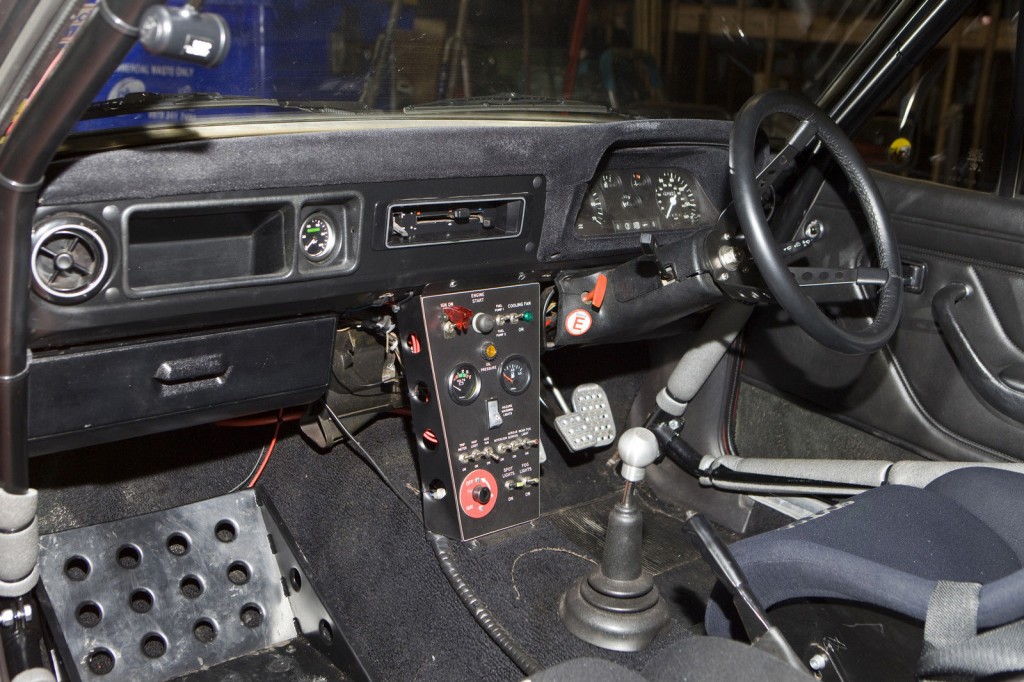 Wow where do I start, I could talk about this car all day, its brought me so much enjoyment over years of ownership, it made me smile driving it to shows and runs, and really made me smile taking part in the Northern Ireland Hillclimb championship, and the trophies its provided me with along the way! There hasn’t been a time, where I have taken the car out and haven’t been complimented on it, it turns heads where ever it goes! 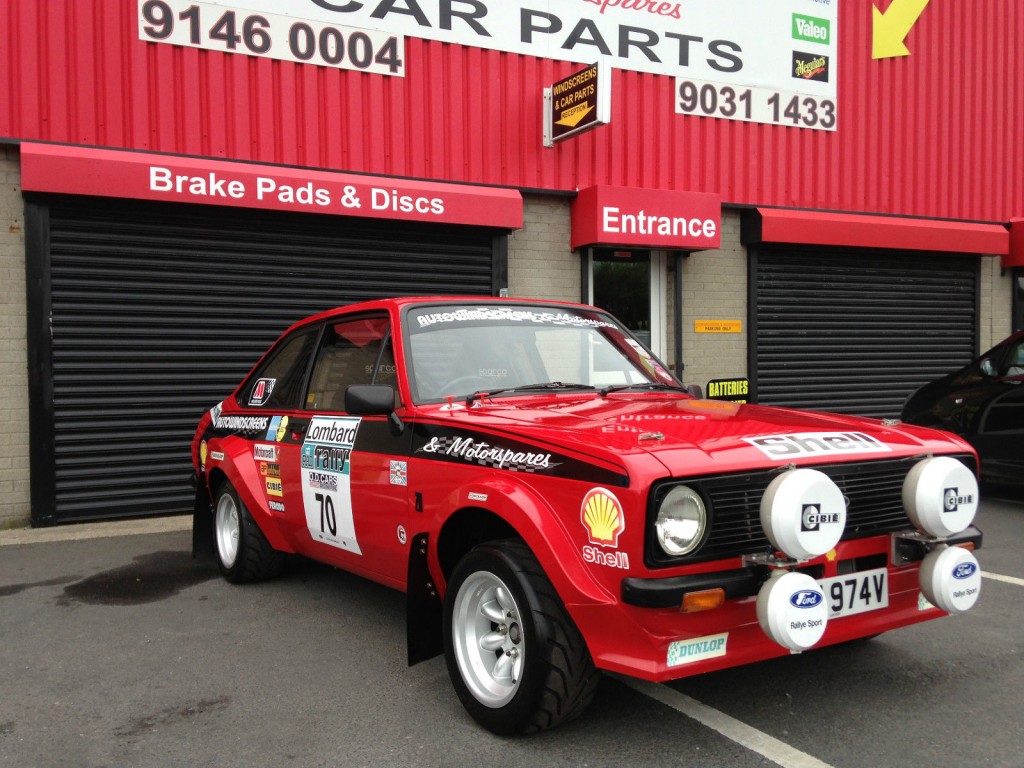 The exterior is in great condition and as you can see has the extended arches to allow for the wider wheels 8in, which run toyo R888 road going slick tyres, the gloss red paint work really does set the car and graphics off. It has been graphics in a way to replicate the famous Rodger Clarks Cossack escort, altho we have done a few stickers of our own just to make it unique. The car has the proper black rubber boot spoiler, black corner bumpers, rear bumper, and handles, glass in the front 3 windows for mot reasons, and 2 rear quarter windows in perspex. Bonnet and boot are secured with catches as well as a book lock. The Cibie spotlights can be removed and fitted very easily and I usually only fit them over the winter, as seen they come with the covers etc. The exterior locks are all present, as I wanted the car to be usable/ lockable. The bodywork is in great condition, but don’t be expecting a concours car, it is used as much as possible, it does get tucked up in the evenings in a warm dry garage, and has only last year been re-waxoiled to keep it fresh for another 36 years! 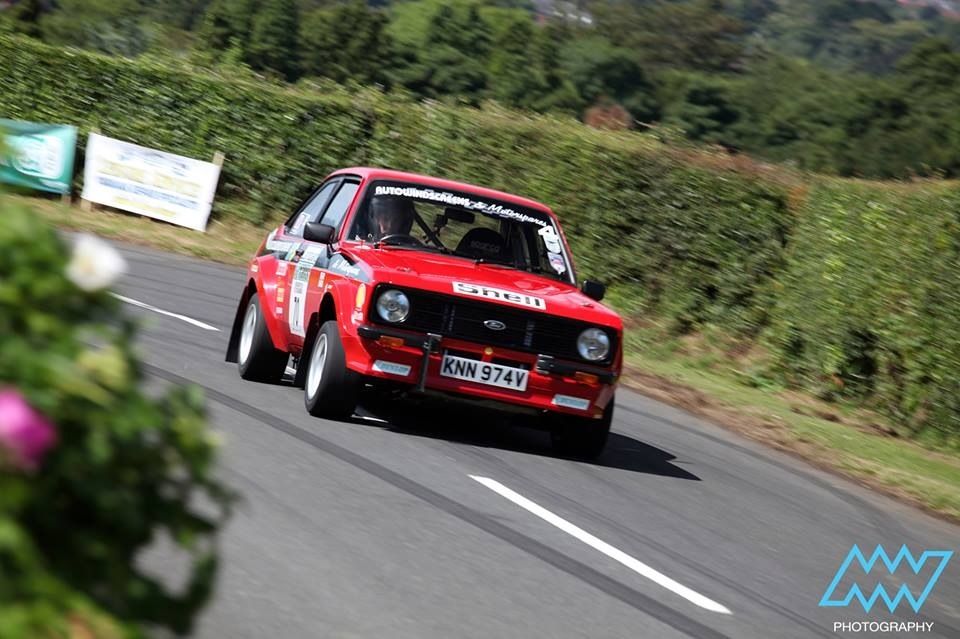 The interior we wanted to keep as standard and useable as possible, hence keeping the dash(flocked) and most importantly the carpets. Having the carpets means that it will hold heat etc and I think made it more pleasurable to drive, the dash has the original clocks but an added centre console for any additional switch gear, inc things like battery cut off, ign switch, spotlights, map light, oil pressure light and gauge, battery voltage gauge and fuel gauge. The seats are fixed back Sparco’s on custom mounts with harness’s, alloy pedals, full bolt /weld in roll cage, heater still plumbed in and the glove box still there. 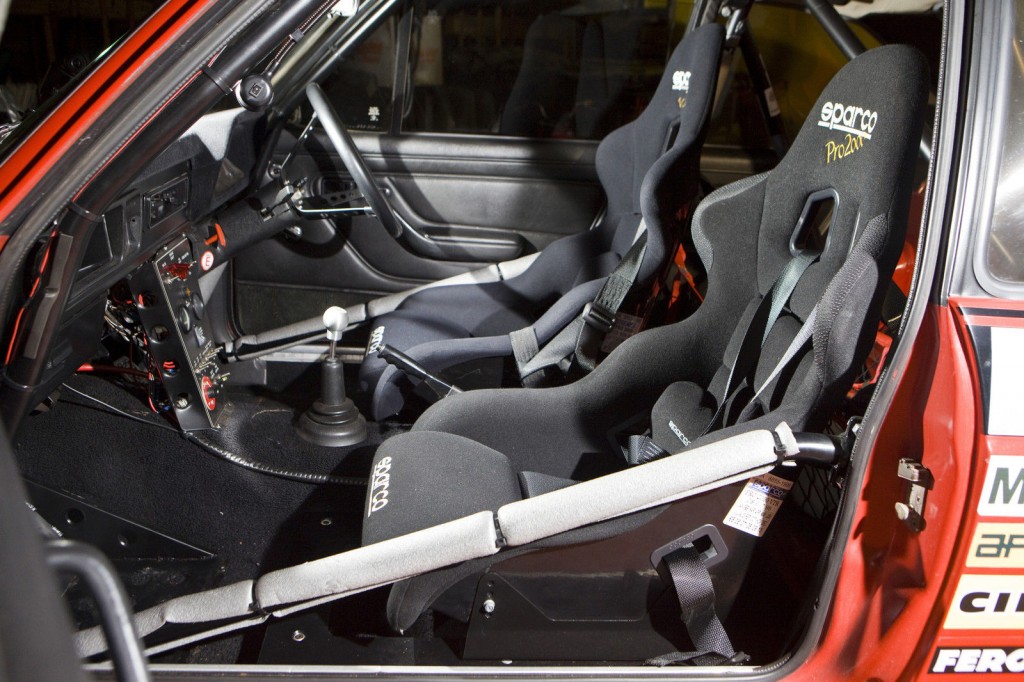 In the boot, the car comes equipped with twin fuel pumps, alloy tank, bosch S4 battery, on an alloy holder and an alloy spare wheel holder. 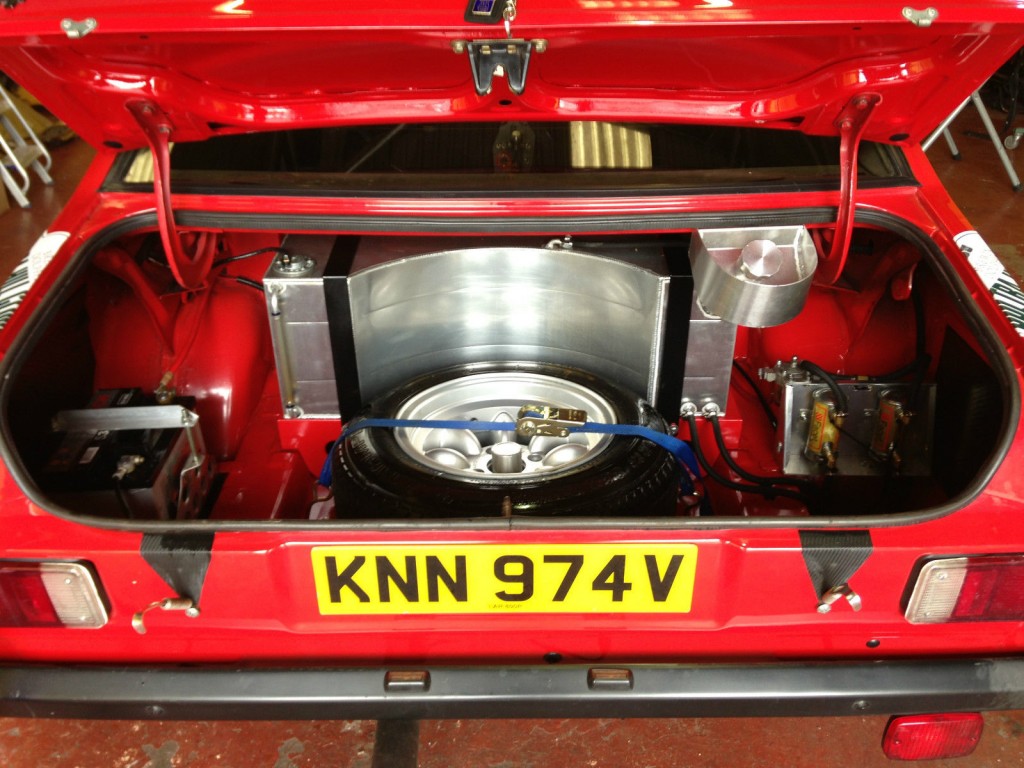 Mechanically the car has been completely rebuilt over the past 3years, using what we thought was the best engine for our budget, Wk developments has transformed what was a standard 2.0 pinto with 45webbers into a car that can really compete in the Northern Ireland hill climb championship, as you can see from the picture of my trophies. The engine at a estimate is putting out around 180bhp, and runs such goodies as a Tony Law exhaust, bronze valves, new pistons, rings, gaskets etc, completely rebuilt 3years ago. The quaife gear kit really opened the car up last year extending 1st gear to about 40mph to allow the car to really get off the line, at the same time a competition clutch was fitted and the final drive was changed. The Lsd unit was also changed to a Gripper LSD with a lifetime warranty, it runs an English axle, with 21 spline atlas shafts which is a proven strong setup. It really does put all the power down nicely to the road. 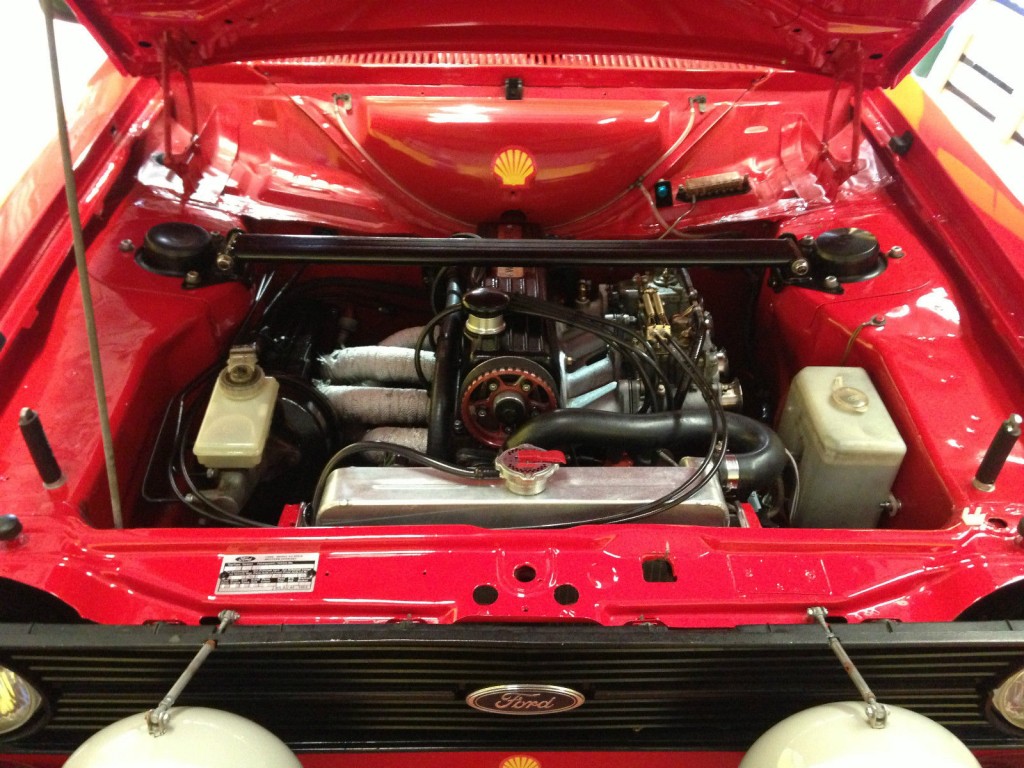 The brakes are Willwood 4pot alloy calipers with Willwood competition pads which really did transform the brakes. Suspension is running Bilsten shocks with Wk development specially selected springs. I have been approached several times to ask who set the car up! Its so impressive the amount of grip it has when you need it, yet how controllable it is when it breaks away, this truly is a greatly set up car! This car really is competitive and won its class in 2013 N.I Millers Oils Hillclimb championship, its usually in the top 3 in my class, which is impressive when you see what its against. 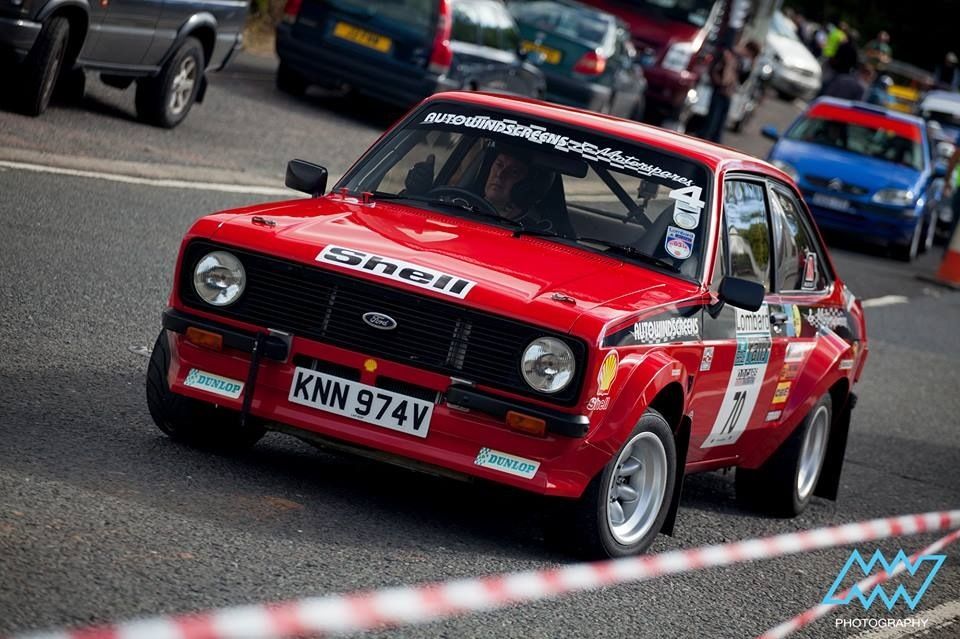 I’m sure there are loads of things I haven’t covered so feel free to get in touch after working hours, car is mot’d until about June, and is located in Bangor, Northern Ireland. Its minutes from Belfast air and sea ports, which I have no problem collecting genuine overseas buyers from.
Price is reduced, as I am not including the 2 spare sets of wheels and tyres, and also the fresh Brian James trailer, but these can be purchased at an extra price if wanted. The Ebay listing is here, for anyone that missed the link above. 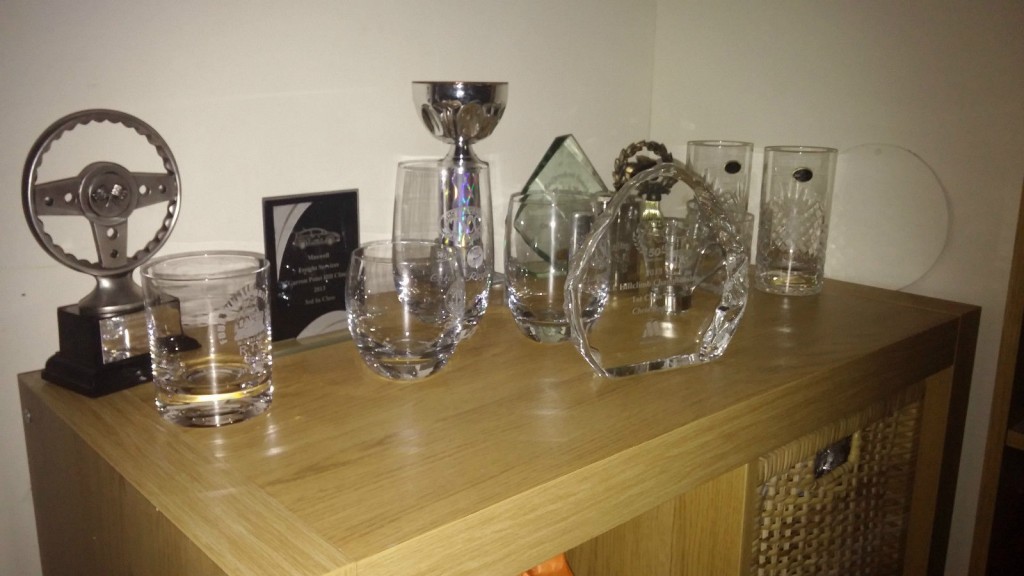