The Volkswagen Eos is the best four-seater cabriolet for people who want a convertible but not a sports car. Sadly it is being discontinued with no replacement. This statement requires some explaining for several reasons, the first being, that if you read this site, your head likely hurts at the thought of people who want a non-sports convertible. 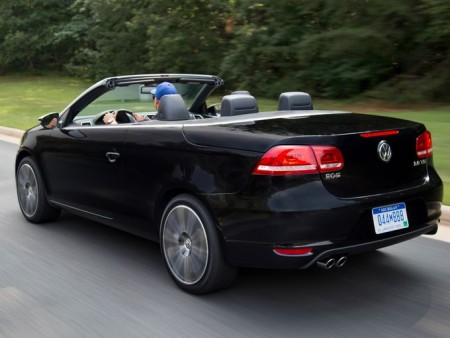 Now non-sports convertibles can be very good,  like the Mercedes E-Class. Yes AMG has turned the sedan and wagon versions of this platform into stellar vehicles that can compete with the best from BMW’s M division. The E-Class convertible, in base V6 trim or even regular V8 is a very good, very fast car, but it’s not a sports car, not by a long shot. This is a very comfortable cabriolet that can be a wealthy person’s sole vehicle or the second car for well-off empty-nesters

The Mercedes, while a stellar vehicle, is VERY expensive. Too expensive to be the pinnacle of this class, but it uses a core concept that has been around for decades. Automatic transmission, quick enough to keep up with traffic, and based on a family car.

Volkswagen slightly changed this formula by using a DSG gearbox instead of a traditional automatic (an eight-speed automatic would have made it more appealing to buyers,) and by using two different family cars as the platform. The Eos, like the much loved but poor selling Corrado is based on Passat and Golf mechanical bits.

Volkswagen launched the Eos into a competitive field but it carried with it, the perfect image and character for its potential buyers.

While it exists in the same $35,000 to $45,000 pricing area as high spec Mini Coopers (which have terrible automatic transmissions), rental-fleet escapee Sebring and G6 cabrios, Florida-spec Solaras, overly-aggressive Mustangs/ Camaros, and low spec BMW/ Audi convertibles, the VW badge carries almost no baggage, neither does the clean styling or new badge.

Eos was a brand new name for a car, which means no preconceptions, but the unknown badge of Eos is a double-edged sword. Without an established name to sell this car, it is simply a trendy toy for many, and when it isn’t the newest or coolest, the market will go elsewhere. This means these cars see their sales collapse after a few years on the lot.

When the Eos debuted it certainly was the newest, and prettiest thing on the lot. It came out in the heart of the tin-top cabrio era of 2005-2010, when seemingly every new convertible had a metal folding roof.  Mercedes began the trend with the SLK and SL, Volvo soon followed with the C70 , BMW, Infiniti and Lexus were all soon in on the game as well.

When the Eos debuted, its folding metal roof was quieter than many of the canvas-topped cars sold by Audi and other rivals. The idea of a metal roof that didn’t need to be hoisted on seasonally also provides the idea of security and ease and ideas in the heads of customers are what sells cars like this.

But what made the Eos stand head and shoulders above the competition wasn’t just the value, or the nice driving dynamics, or the practicality, it was the fact that the middle roof panel is a giant pane of glass that can be retracted. Giving a convertible a power sunroof, keeps it bright and airy even when the roof and windows are sealed up. This is what sold the Eos to people all over who drive their carbios with the roof up most of the year. On most drop-tops, the high-beltline and small windows mean these cars are darker than Dracula’s casket with the top up. Adding a glass panel was a stroke of genius and with the Eos, this concept is gone from the four-seater, cabrio marketplace.

I wish VW would redesign it instead of replacing it with cheaper, canvas-topped Golf and Beetle convertibles. This was a great car, that could spawn a stellar, second generation version based on the MQB platform. Now we are stuck with cars that are not as well packaged as the Eos.

If you want to buy a new Volkswagen Eos, now is pretty much your last chance. The drop-top will cease production in Portugal in May. Volkswagen USA is offering a “Final Edition” as a trim package and I am going to miss it.