When I was a in high school I read a New York Times piece about how yellow was the new red for cars. If you wanted an attractive, sexy sports car, you skipped red and went straight to yellow. This was great for most automakers, except for one.

At the time, BMW didn’t really seem to understand the concept of “yellow.” BMW’s sub-brand, MINI seemed to get it just fine and sold yellow cars that wore the colour well. Up until very recently, every yellow car with a BMW badge was impossible to look at it. They were blindingly hideous. Take this E92 M3 for example: 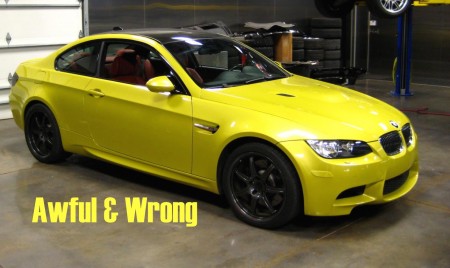 Don’t get me wrong, BMW’s cars themselves are good looking, it’s the appalling shades of yellow that blinded me. Painting a car an attractive shade of yellow isn’t hard to do. Ferrari and an assortment of US automakers got it right in the 1960s, painting their cars in a colour that is best described as sunshine. Porsche and GM still use similar paints today.

BMW however insisted on adding too much white to their yellow that makes it look like a disgusting omelette that you would find in the worst back-roads truck-stop. I love the BMW Z1 but in this colour it just depresses me.

Then they added too much green to their yellow paint, which created the worst kind of paint in history, BMW Phoenix yellow which is on the M3 at the top of this story. It’s so bad that I can’t even bring myself to put it down here. It was originally seen on the E46 M3 and that paint is so bad, that it actually hurts the re-sale value of those cars compared to other colours. I think perhaps that vinyl wrapping to change a car’s colour was invented for the E46 M3 in Phoenix yellow, or as I call it, baby-vomit green.

Finally, on the latest refresh of the Z4, they figured out that they should just go with sunshine yellow, and it looks great!

But why did it take so long? A little while back I saw a Smoking Tire one take of a Dodge Charger and Matt Farah pointed out that he can’t see part of the navigation map because he is colour blind. Maybe Bavarians suffer the same issue as he does. Or maybe they were just too stubborn to realize that yellow on a car either has to be bright like the sun, or deep like a mass-produced, chemically flavoured, Easter treat, that is so full of artificial flavours it makes anti-vaccer/gluten-free/Quidditch moms cry. Either way, BMW finally got it right. Will it last?