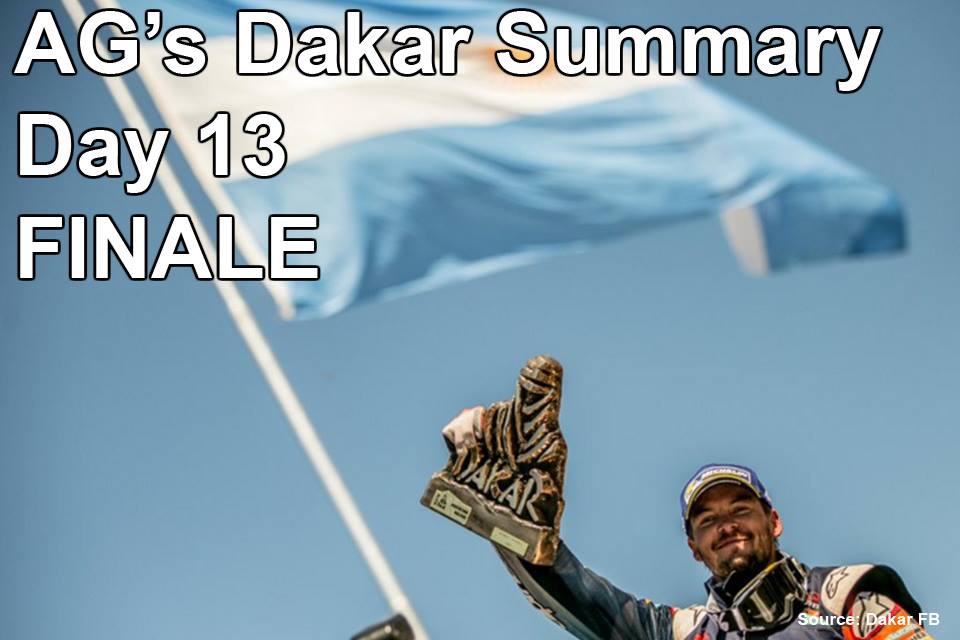 Last day of the Dakar. It’s over! The wars have been waged against the desert, against machine, against luck and fate, and against the other racers. Finally, the race is complete.
The final stage was relatively short: only 180k. And also, it got started after only about a 100k transit in the morning. After the stage, a leisurely 400k jaunt to Rosario to finally drive or ride over the finish ramp.
Interesting for today: a reverse start order. The bike in last place left first on the road, and 30 second intervals for that part of the field. My guess is that this was to keep the field compressed for the ceremonial finish ceremonies. It was on live TV after all.
Most of the racers had very little drama, except for Gordon. He ended up getting towed behind on of the huge trucks. They showed some handheld in-car of that and said that it seemed like the big truck didn’t even know they were back there: they were being towed at 80kph through the desert track.
No huge changes to the leaderboards today. To summarize the Dakar as far as “big stories” in my view, here there are:
Toby Price, an Australian, won the bikes on his second attempt. Amazing run. He was on a KTM, which is like the zillionth year in a row that KTM has won.
Second place on bikes went to Stefan Svitko. Now what’s cool here is that this guy is a privateer, not a factory rider!
The Honda team kind of bombed out. Bort dumped it and then wussed out. Now, Ricky Brabec, USA rider with Honda, did come in 9th which is super awesome. But as a team and as a marque, given the resources they put toward the effort, the result was underwhelming.
For quads, the Patronelli brothers were first and second. They took last year off, so that’s a pretty roaring return.
In the cars, the biggest story was that Robby Gordon was finally proven right: a desert racing style, 2WD vehicle can beat those X-Raid Minis. Unfortunately for Gordon, it was Peugeot that found the magic formula and took the win. The new Peugeot buggies were fast, stout, and reliable.
Peterhansel took the win, but under protest for a refueling issues. The FIA will resolve that in some slow fashion and by the time it’s resolved, it won’t matter: Peugeot has six to eight months of saying they won the Dakar, and if it gets reversed then… they can just start talking about next year.
Loeb came to Dakar from WRC and everyone thought he would be slow because “well, he only knows WRC”. All those people were wrong wrong wrong. He ended up 9th overall after some big “desert lessons” where he lost hours repairing from a rollover and also time stuck in the dunes. Even he admitted that it was an eye opener, but the skill and potential are definitely there.
Nassar didn’t win, and as an anti-fan that’s fine by me. 😉
In the trucks, it was awesome to see De Rooy from the Netherlands follow in his father’s footsteps and win the Dakar. That guy has shown himself to be a great sportsman over the years I’ve been watching. Class act and I’m happy he won!
More and more, the amount of video that’s available within hours of any incident or happening is just incredible. The quality of information that’s coming from the racers and their crew and the stage side fans makes it fascinating, if exhausting, to follow.
I hope the Dakar has inspired you this year!