Few prototype race cars in recent memory have achieved their mission statement as emphatically as Peugeot’s 908 HDi FAP. The sleek prototype emerged from the manufacturer’s plans to return to endurance racing after a 13-year layoff that followed its two-time Le Mans-winning 905 model of 1992 and 1993. But from its initial conceptual presentation in 2005, it was quite clear that not only was the 908 HDi FAP engineered to win, it was to do so in dramatic, technological fashion, with a cutting-edge, environmentally sound, diesel-powered V-12 that employed an exhaust particulate filter for remarkably clean emissions. Although such a concept seems obligatory in today’s eco-savvy consumer market, this was quite a ground-breaking approach to racing even just 10 years ago. 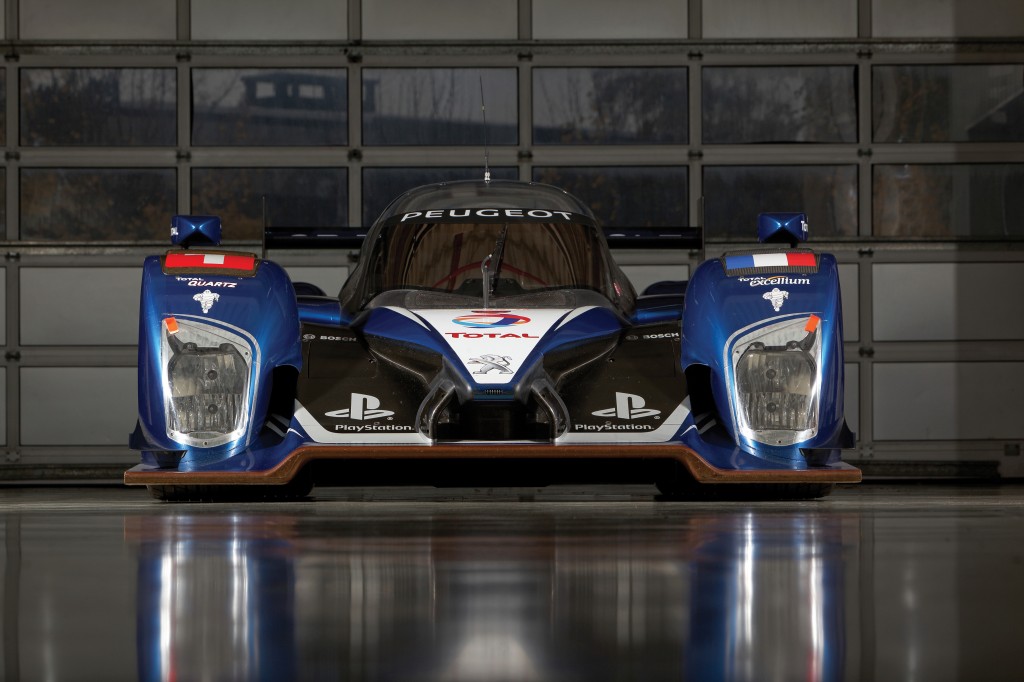 Following a static introduction at the 2006 Paris Motor Show, the 908 HDi FAP was a winner from the get-go, as it took the chequered flag in its debut at Monza in April 2007. In June, two cars (chassis numbers 02 and 03) were entered at the 24 Hours of Le Mans, with chassis number 03 taking 2nd overall. By the time the season wrapped up at Interlagos in November, the 908 HDi FAP had won the Le Mans Series of endurance racing events. When plans commenced the following year for the 2008 season, the priority on winning at La Sarthe in June was even higher, as it was one of the few season events that the 908 had not won outright. 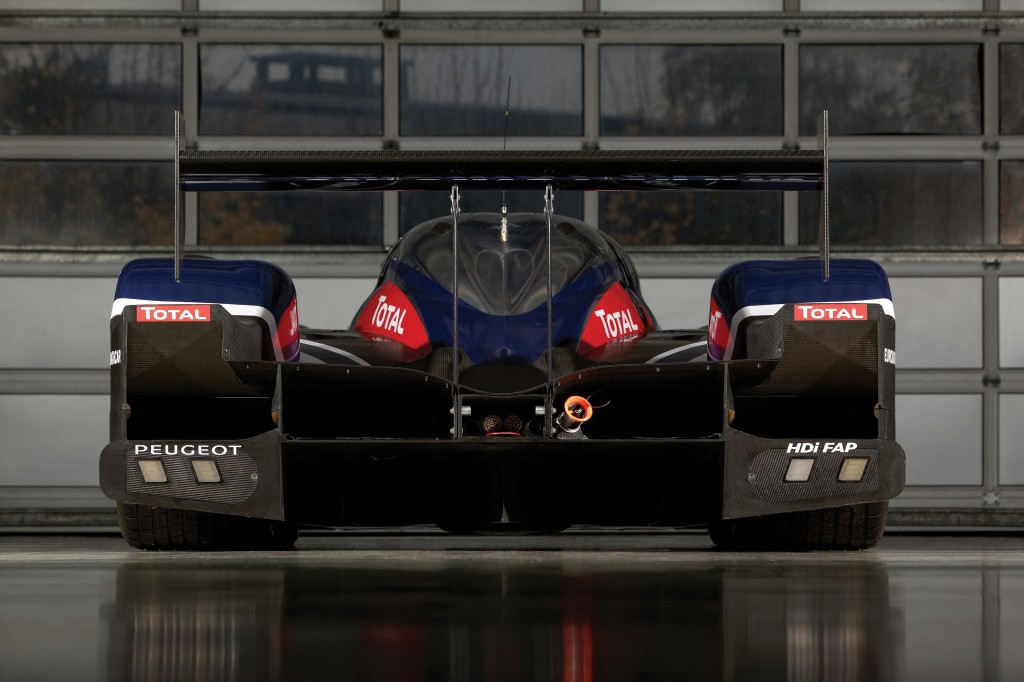 The monocoque for chassis number 05 was built in late 2007, and it appeared as a complete race car at the 2008 Le Mans for the first official test session on 11 June. It was there in replacement of chassis 04, which was destroyed after a remarkable accident at a Le Mans test day 10 days earlier. Chassis 05 was the only new chassis raced at Le Mans that year alongside the 2007 chassis 02 and 03. 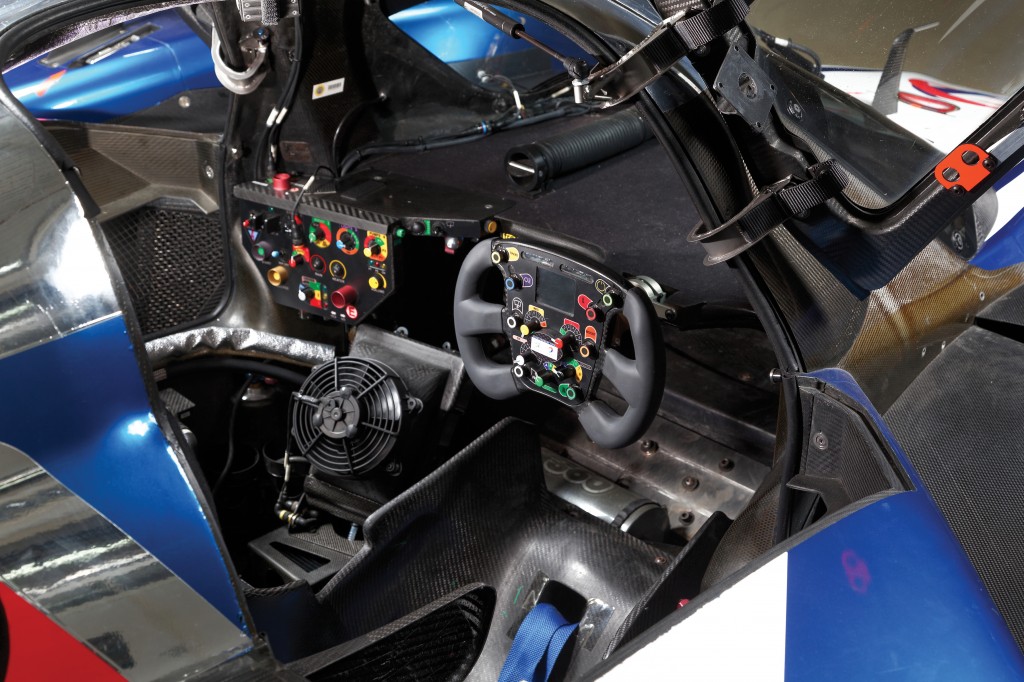 Chassis number 05, decorated with #07 and being driven for Team Peugeot Total by Nicolas Minassian, Marc Gene, and 1997 Formula One champion Jacques Villeneuve, came in 2nd overall, bested only by Audi’s dominant R10 TDI. At the Nürburgring 1000 KM in August, this 908 was again piloted by Gene and Minassian, with the former driver setting the pole time and the latter establishing a fastest lap. There, the car again came in 2nd place, this time following the 1st place finish of chassis number 03. At Silverstone a month later, chassis number 05 was unfortunately forced to retire early, after 45 laps, due to an entanglement with a Porsche GT3 RSR whilst Minassian was behind the wheel. 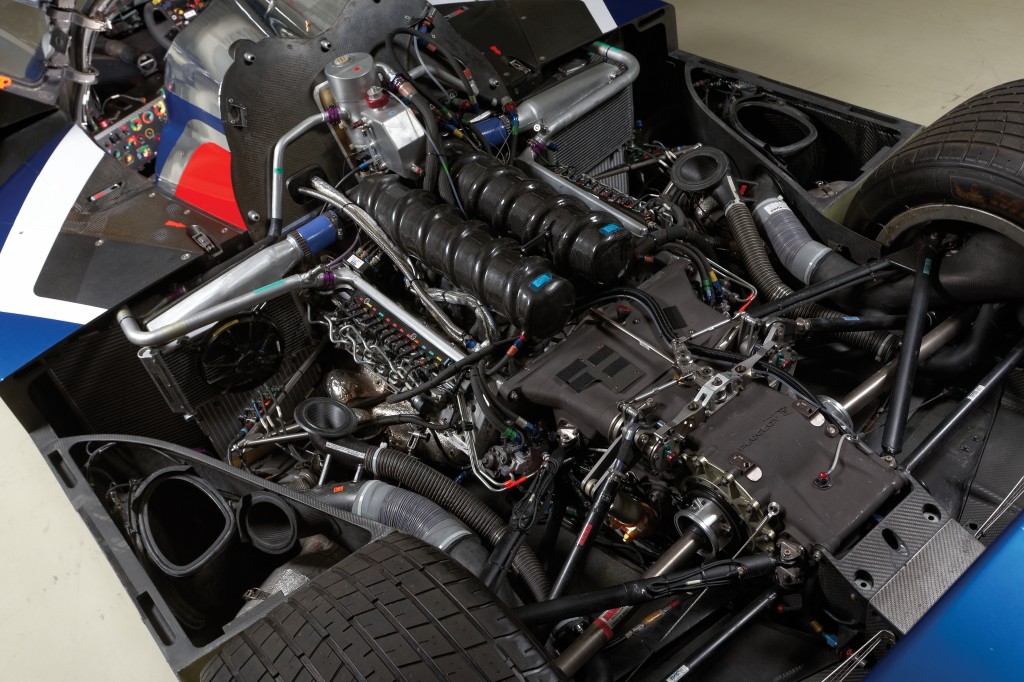 The following season would prove to be even more significant for this 908, even though it was only raced twice, as two newer chassis had been built that would field a majority of the season’s duties. Starting with the season opener at Sebring in March 2009, chassis number 05, still dressed as #07 and being driven by Christian Klien, Pedro Lamy, and Minassian, placed 5th. In September, changing to #08, the car then took the chequered flag at the Petit Le Mans, with Franck Montagny and Stephane Sarrazin behind the wheel. 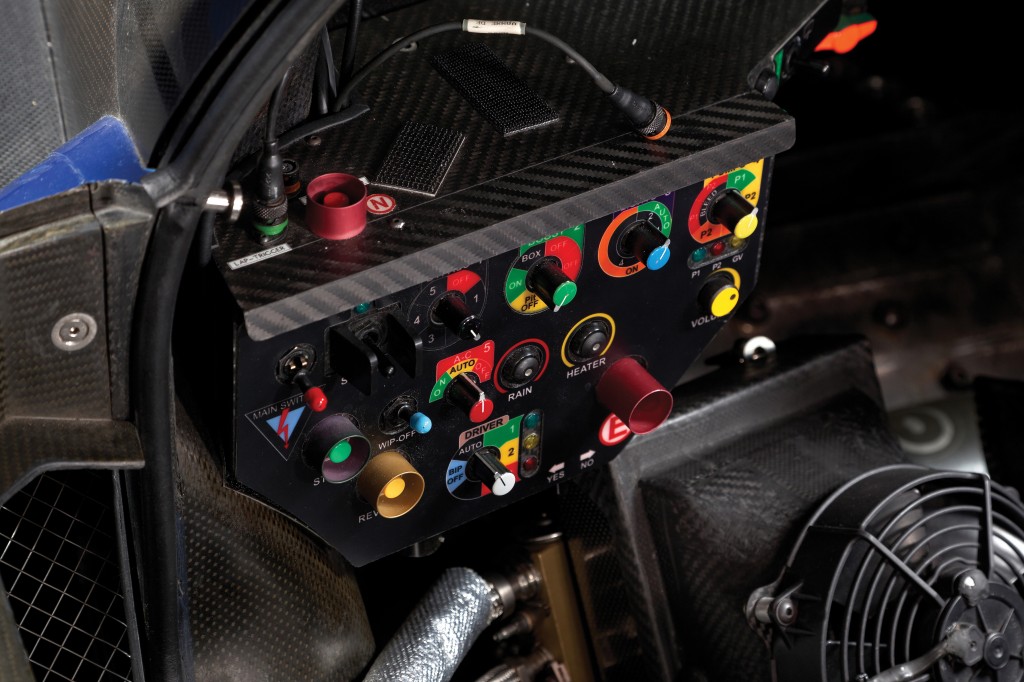 In 2010, chassis 05 was entrusted to Oreca to compete in the LMS Championship. At the time, Team Peugeot Total was focusing on the new Intercontinental Le Mans Cup (ILMC). Oreca had started the season racing chassis 02, but it finished the last three races of the season in this chassis 05, finishing 1st overall at the Algarve 1000 KM at Portimao in July, this time wearing #04 and being piloted by Nicolas Lapierre, Olivier Panis, and Sarrazin. Following a disappointing 31st place showing at the Hungaroring 1000 KM in August, which was due to a faulty bevel gear, chassis number 05 bounced back in September 2010 with a 2nd place finish at Silverstone, where it was once again driven by Lapierre and Sarrazin. 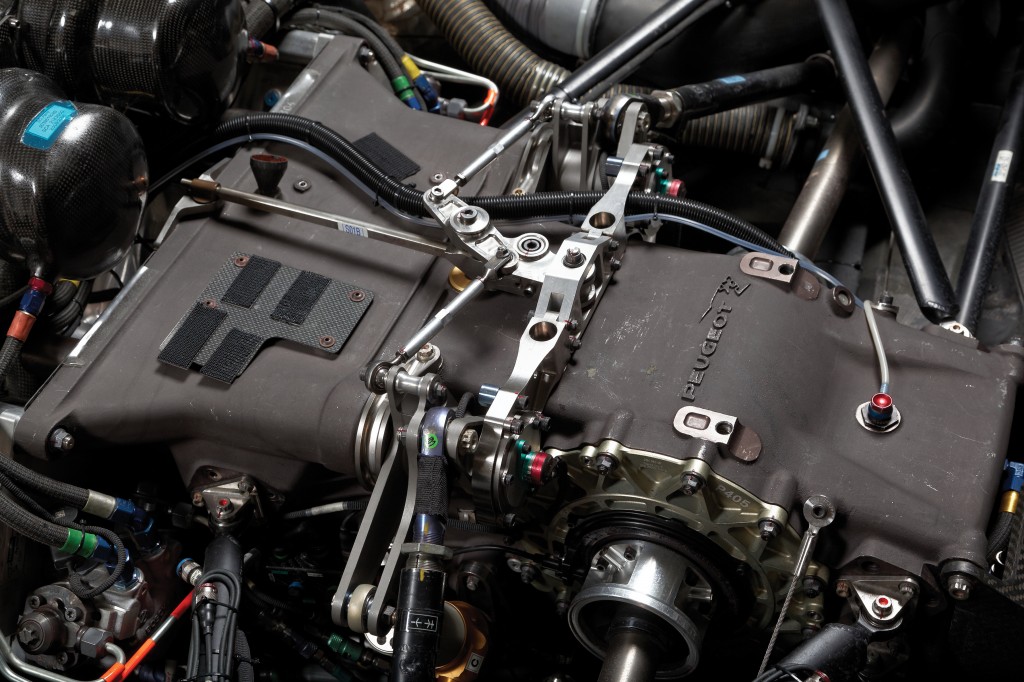 This marked the conclusion of the car’s racing career, as the factory withdrew from campaigning the successful 908 HDi FAP following the 2010 season. Without a doubt, chassis number 05 was a strong contributor to the 908’s overall record of victory, as it helped Peugeot win three team championships, three Constructors’ Championships, and two Drivers’ Championships in a span of just four years. 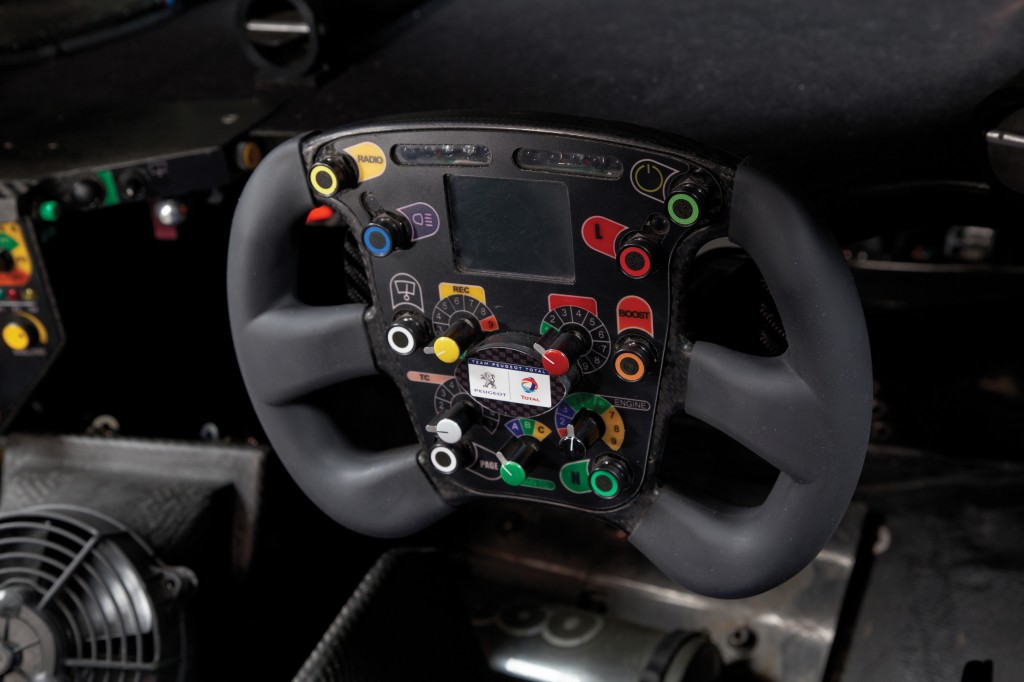 Chassis number 05’s current availability marks only the second time that a 908 HDi FAP has been publicly offered. In addition to its outrageous performance on the track, this car also boasts a certain rarity, as it is one of only nine chassis that were actively campaigned by the factory team between 2007 and 2010. Claiming two overall victories, three 2nd place finishes, three pole positions, and four fastest laps, this sensational and technologically innovative piece of racing history represents an important chapter in Peugeot’s considerable competition pedigree. Chassis number 05 offers serious race car collectors and historic racing participants the opportunity to acquire one of the Le Mans-prototype class’s most successful and unique entrants—a marvel of both ferocious competitiveness and brilliant green engineering. 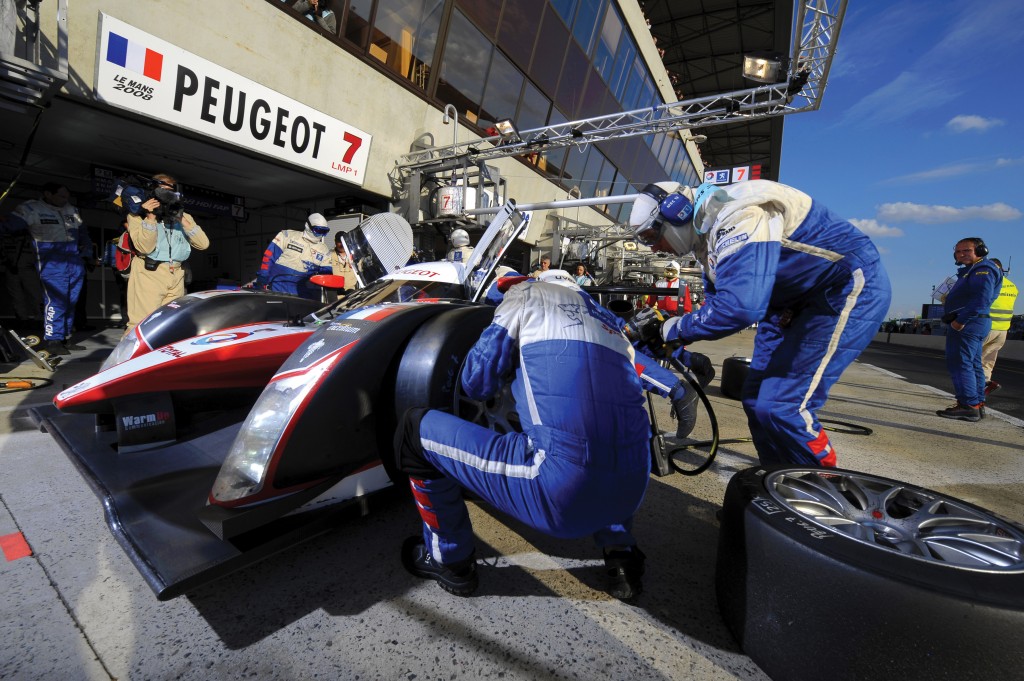 Firing up and running this vehicle calls for specific equipment, third-party software licences, and skills. The seller commits to providing the necessary technical support for a period of two years. This service will be provided at Peugeot Sport’s normal rates for technical support. 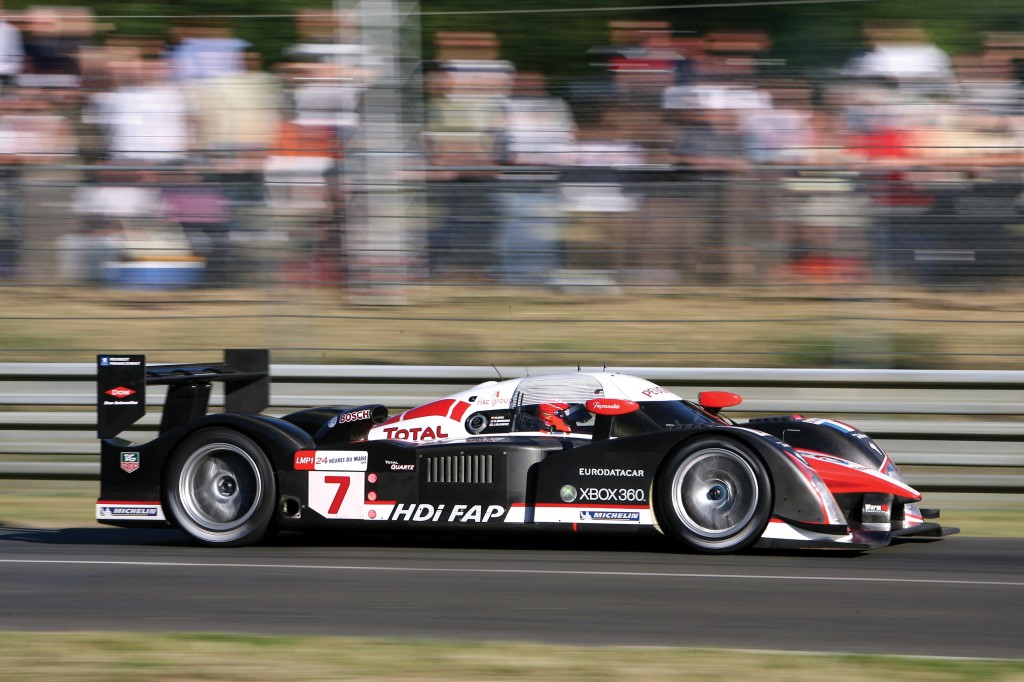