If this orange McLaren M16C looks familiar to you, perhaps you saw Johnny Rutherford win the Indianapolis 500 on May 26, 1974. You’d certainly remember him if you saw him: starting in 25th position, he shot up to 12th in only three laps. A battle ensued between Rutherford and A.J. Foyt for about 50 laps, until Foyt blew an oil line. Rutherford took the lead for 59 of the last 60 laps, and he never looked back. He won the race by a full 22 seconds and had lapped every car in the field, except second-place Bobby Unser. 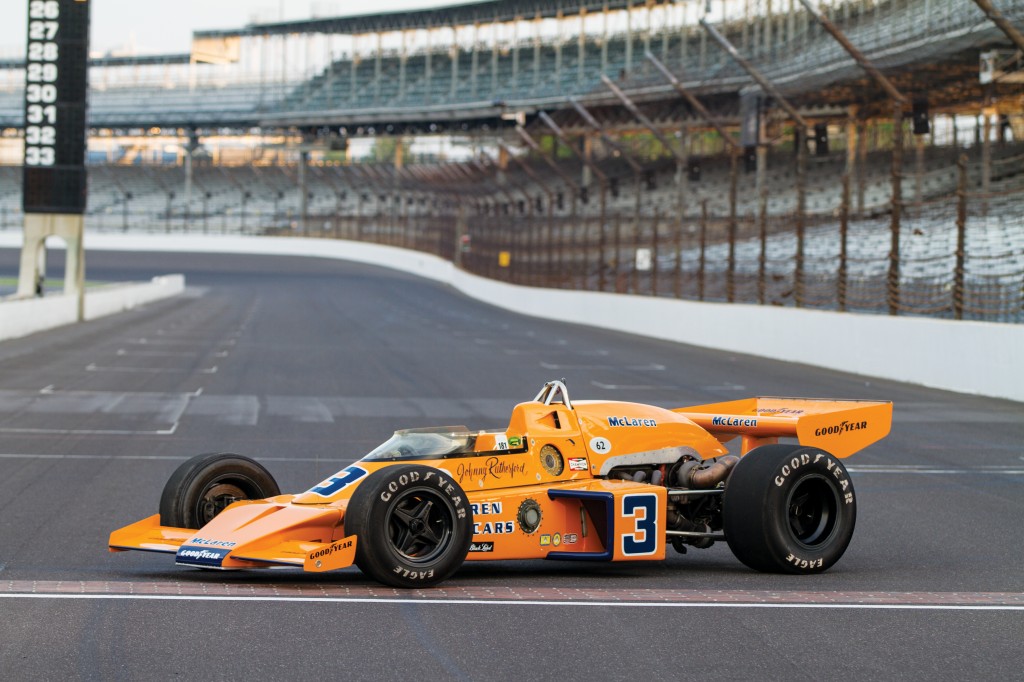 Johnny Rutherford and the McLaren went on to win the Milwaukee 150 on June 9, 1974, and the Pocono 500 on June 30th. He finished 4th at the Michigan 200 on July 21st and 4th at the Trenton 300 Race 1 on September 22nd. He was also 6th at Trenton on April 7th, 7th at the Trenton 300 Race 2 in September, and 7th in Phoenix on November 2nd. Rutherford had quite a year, and while he was runner-up to Bobby Unser in the championship, his McLaren was on the cover of the 1974 Indianapolis 500 Yearbook. 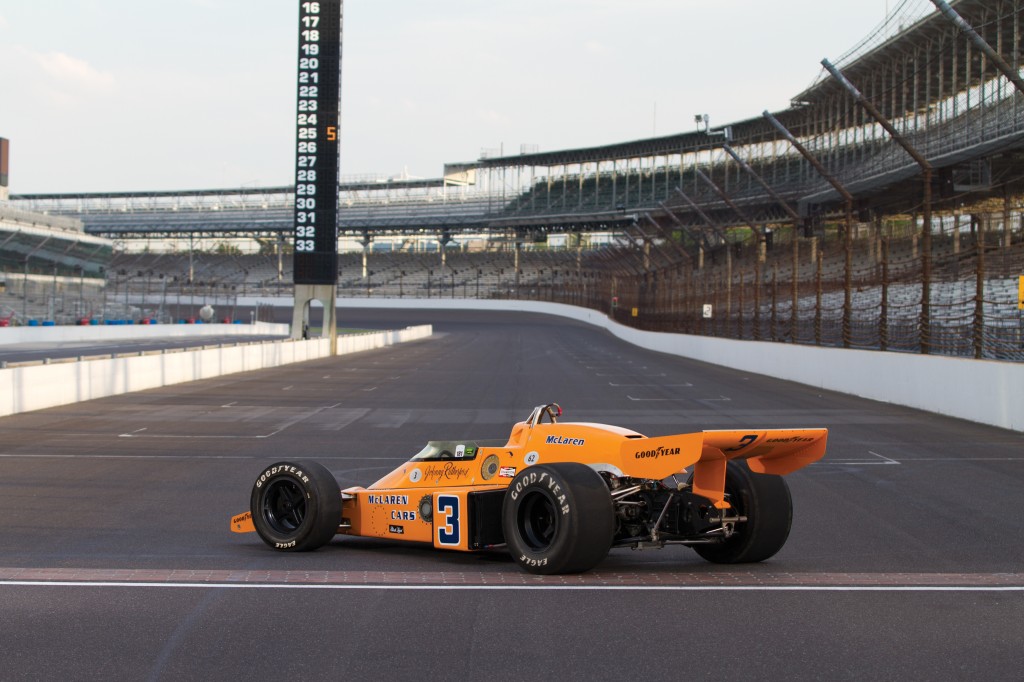 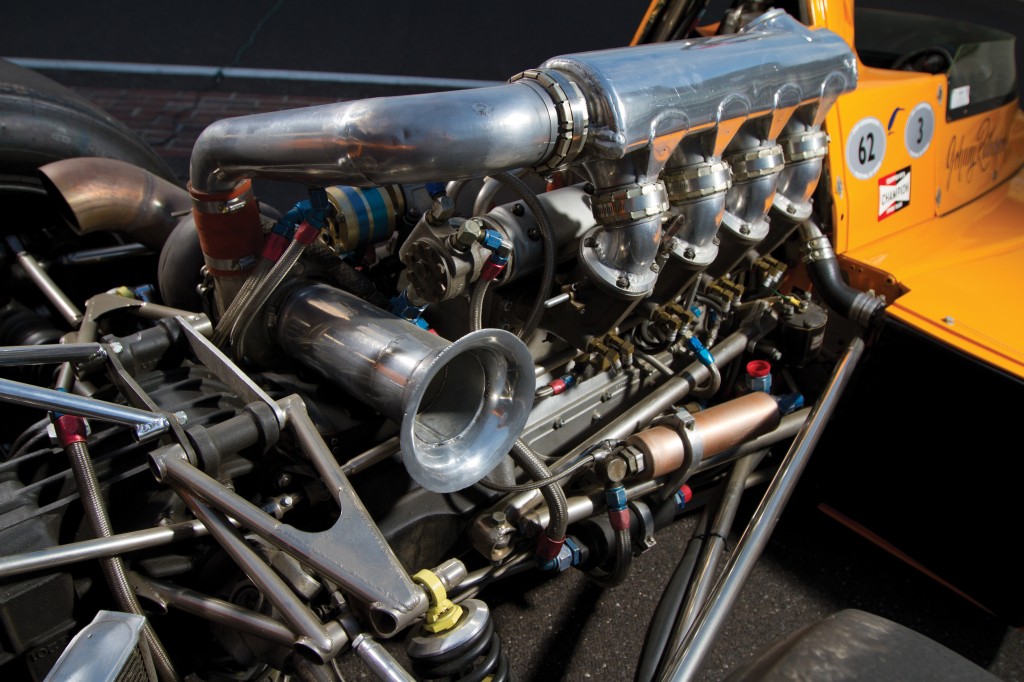 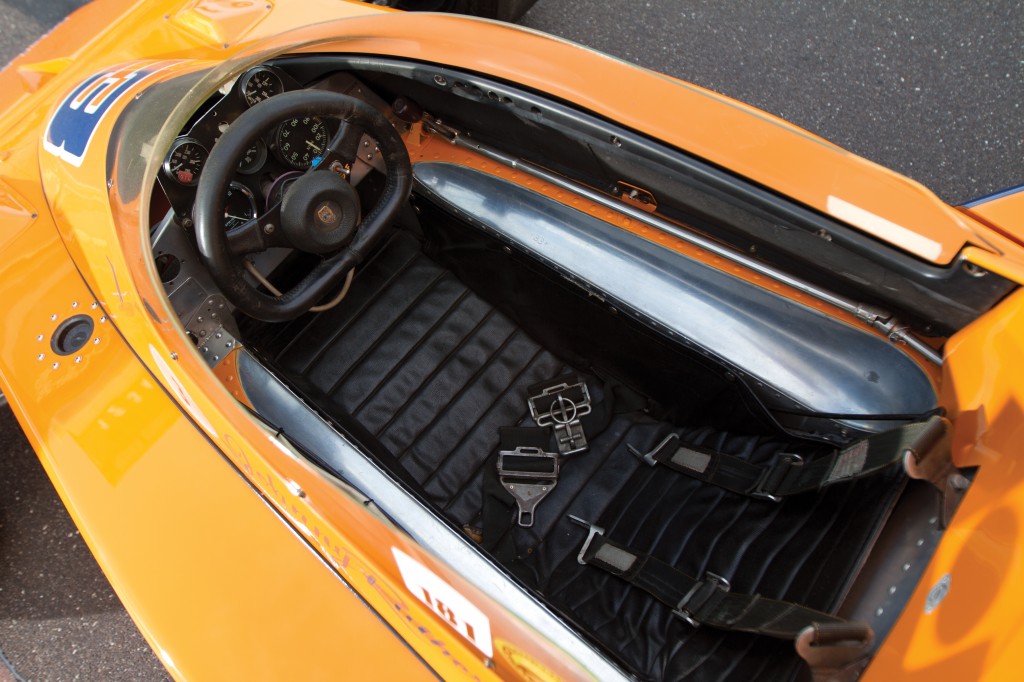 The McLaren that carried Rutherford to the Indy 500 Victory Circle was designed in 1971. Gordon Coppuck reconsidered his M15 design after observing Lotus’s success with the wedge-shaped 72. Uncertain about Formula One, Coppuck thought the low nose would be ideal for circle racing, so he moved the radiators to the sides. The aluminum monocoque carried the turbo-charged Offenhauser four-cylinder engine as a stressed member, and A-frames handled the rear suspension. The engine cover swept up to include a rear wing and balance the downforce on the nose. 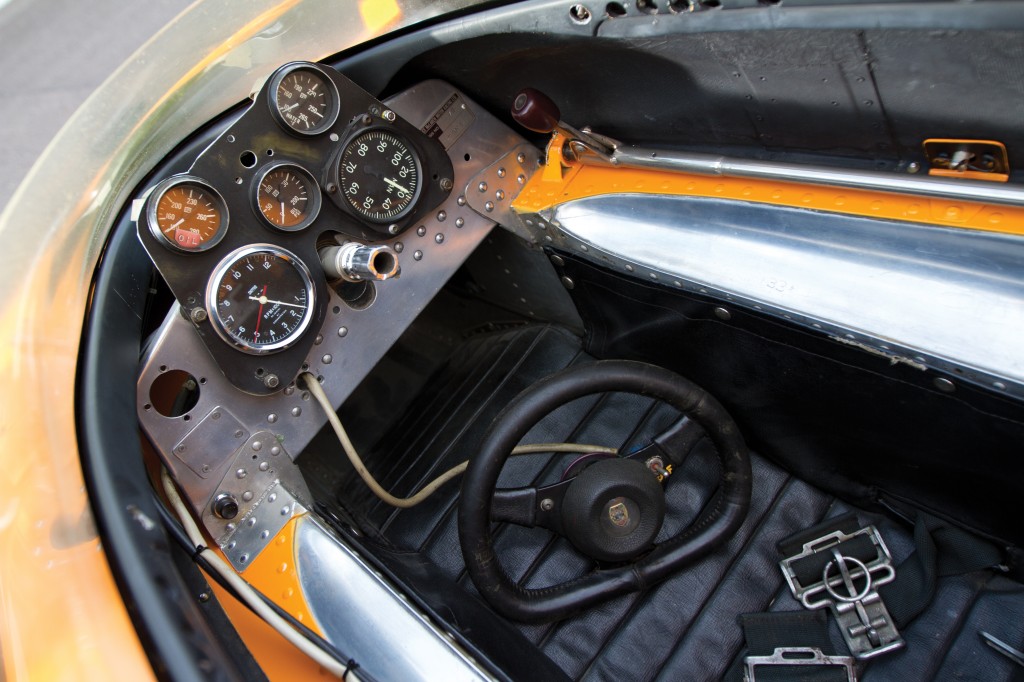 Roger Penske and Mark Donohue visited McLaren in late 1970 and bought two of the new M16s. McLaren Works drivers, Peter Revson and Denny Hulme, joined Donohue at Indianapolis in 1971. Revson got the pole and Donohue took the early lead, until his gearbox failed. Al Unser won in an Eagle, but Revson finished 2nd, while Hulme broke down. Donohue would later score two wins with the M16. 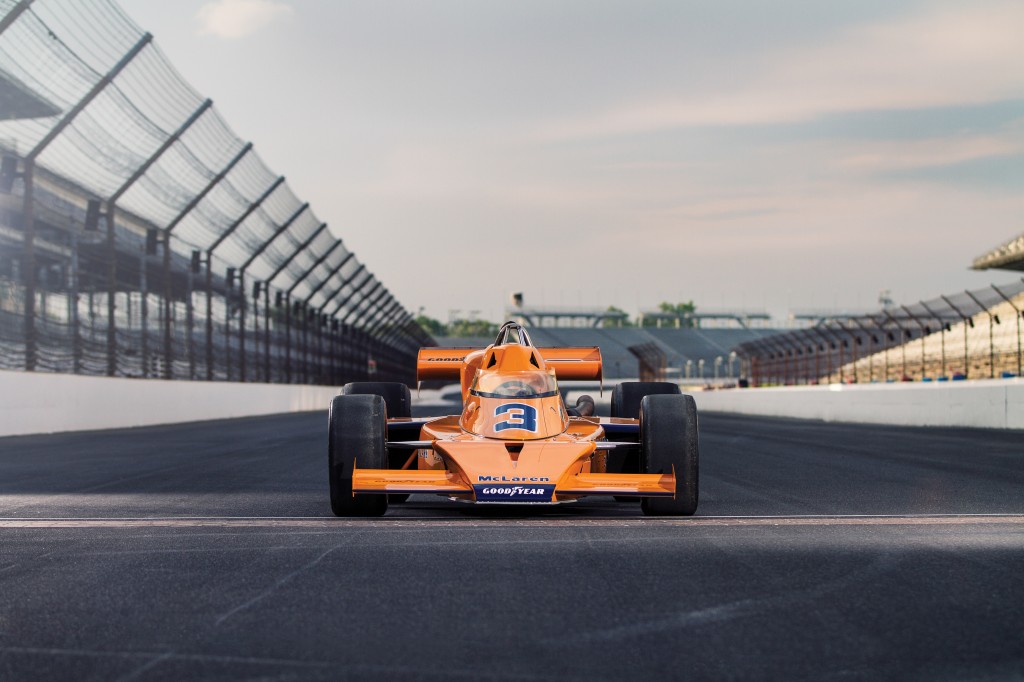 The M16B was introduced for 1972, with a shorter nose and the wing further back. Penske bought two more cars to run the whole season. Bobby Unser had an even faster Eagle for Indy, but Penske turned down Donohue’s turbo boost, gambling that the other cars would break. They did, and Donohue won. 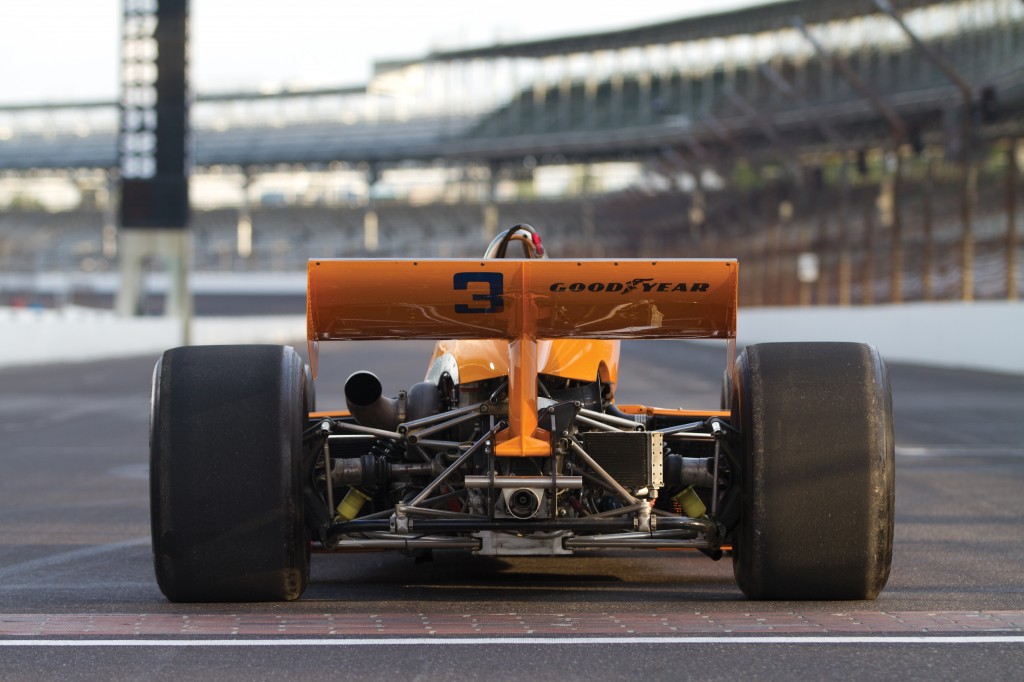 McLaren revealed the M16C in 1973, with a rounder body, better engine cowling, and a cockpit like the upcoming M23 F1 car, which was based on the same design and would win two world championships. McLaren hired Rutherford to partner Revson as a Works driver for the USAC season, and Rutherford promptly grabbed the Indy 500 pole in the car offered today, M16C-5, at 198.413 mph. However, the race was a nightmare. It was delayed by rain for two and a half days and was marred by tragedy. Three horrific crashes killed two drivers, Art Pollard and Swede Savage, and badly injured Salt Walther. Rutherford had mechanical problems and a fuel leak, but, ultimately, he finished 9th. He would win at Michigan later and record two 2nd places, a 3rd, a 4th, and two 5th places. 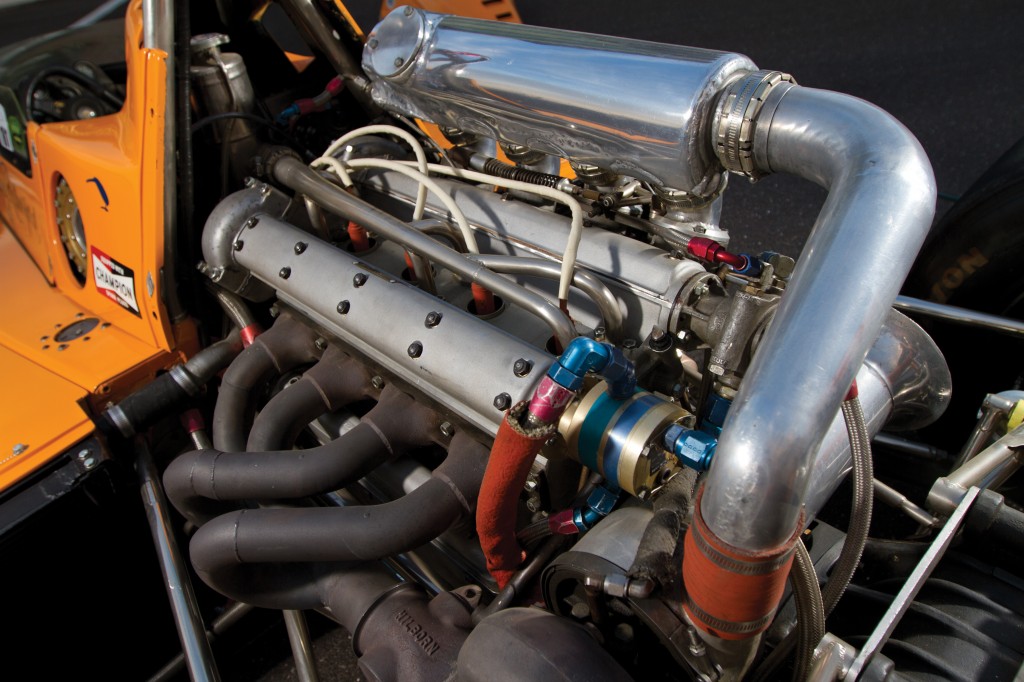 The Indianapolis 500 was worried about safety in 1974, so the rear wings were reduced in size and the fuel load was cut from 75 gallons to 40. In addition, the turbos were fitted with 80-pound pop-off valves in an effort to slow the cars. Rutherford in M16C-5 was partnered with David Hobbs in the McLarens Works, which was updated to M16C/D specification. Despite having the second fastest lap speed of 190.446 mph, Rutherford didn’t qualify on Pole Day.

He was forced to start 25th of 33 cars, but it seemed to matter little. By the third lap, he was running 12th. After A.J. Foyt blew an oil line, Rutherford would lead 59 of the last 60 laps, winning by 22 seconds over Bobby Unser and lapping everybody. Rutherford’s winning speed was 158 mph. He would go on to win two more IndyCar races that year.

In December 1976, Rutherford’s car, M16C-5, was sold to a private team, WalMotor, which was owned by George Walther and Salt Walther, who had been injured at the race in 1973. Salt Walther failed to qualify for the Indy 500 in 1977. Graham Mcrae tried to qualify for Indy in 1978, but he was unsuccessful. He entered the Mosport Park 300k in June 1978 but did not start.

However, on July 26, 1978, the team got some good news. Tyler Alexander, director of McLaren Racing, wrote to Jeff Walther, verifying that M16C-5, which was sold to WalMotor in December 1976, was definitely the 1974 Indianapolis 500-winning car.

The M16 had been competitive far longer than expected and wasn’t replaced until 1977. It almost had five Indy 500 wins. Peter Revson finished 2nd in 1971, and Rutherford was laying 2nd in the 1975 Indy 500 when the race was stopped by rain after 435 miles. He actually won the 1976 race in a reversal of the situation, when the race was stopped at 255 miles. Still, M16s won three Indy 500 races in six years, which is a remarkable achievement.

In 1978, M16C-5 was bought by Florida collector Rick Carroll, who had it restored to the exact specifications of the 1974 Indianapolis 500. When Carroll passed in 1991, it was sold to the present owner for a then record price for an IndyCar. Interestingly, other interested parties included McLaren principal Ron Dennis.