The factory competition variant of the iconic Shelby GT350, the GT350 R, was purpose-built for racing, and Shelby American extracted a hefty premium for the ultra-performance it commands. As a result, there were few produced (only 33 according to most sources), and they remain rare today. Chassis 5R538 was built in 1965, although first owner Roger West didn’t take possession until 1966, as noted in the SAAC Registry. West had some real success with it, including winning the SCCA Southeast Division Championship. But as he also started racing a Ford GT40 (number 1070) in 1967, he soon decided to let the Shelby go. Charlie Kemp had seen West race the Shelby and had been impressed. He was ready to move up to something with a little more power, so, in late December 1967, he put down $4,600 cash at Foreign Car Center in Birmingham, Alabama, and took West’s car home, along with a huge quantity of spares. But he got something along with the car that was worth more than everything else put together: Pete Hood, the GT350 R’s mechanic. 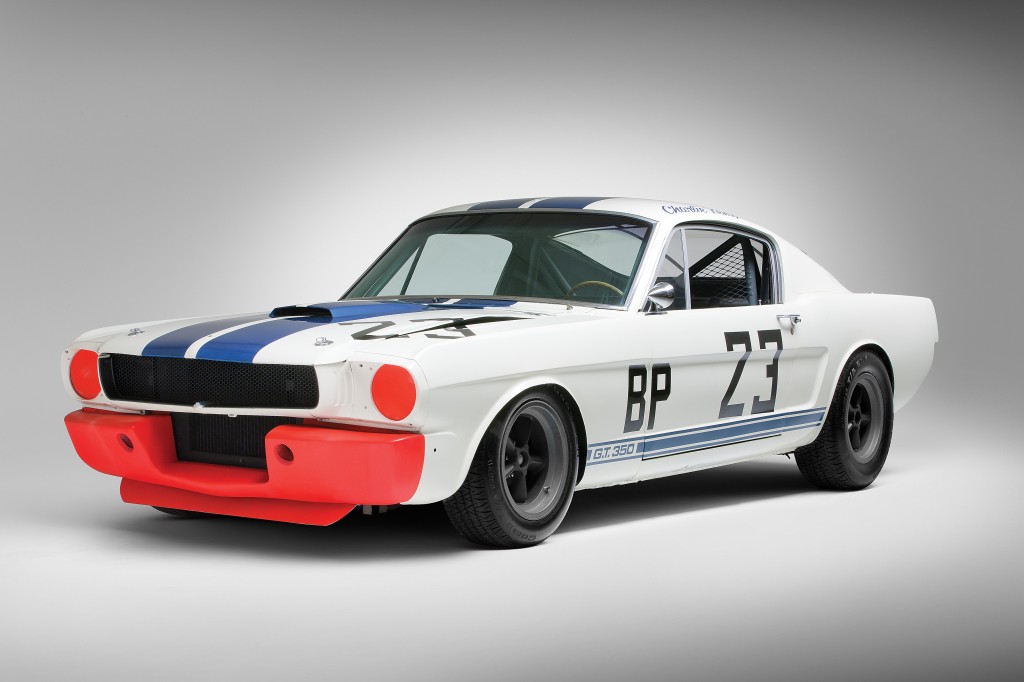 Anywhere old racers gather you can hear a story about Pete Hood. As Charlie Kemp says, “Pete is a rather independent cuss if there ever was one,” and as tall as the tales get, they’re probably true. After Charlie’s first race in 5R538 at Montgomery, Alabama, where he both broke the lap record and blew up the engine, “Pete adopted me and the car,” said Charlie, and came on as crew chief. They embarked on a program to make an already competitive car great, by tweaking the suspension, removing weight, and extracting every last ounce of horsepower out of the engine. By March, they had won the SCCA Regional at Daytona overall (highlighted by the famous “pass in the grass” of Robert Gray in his Corvette to take the win). This was soon followed by an overall victory in the Nationals and, eventually, the 1968, 1969, and 1970 Division Championships. Kemp and his GT350 R weren’t just the fastest thing in B-Production; they were just about the fastest things on the track. “There really was nothing that was faster in ’68 and ’69,” he said. 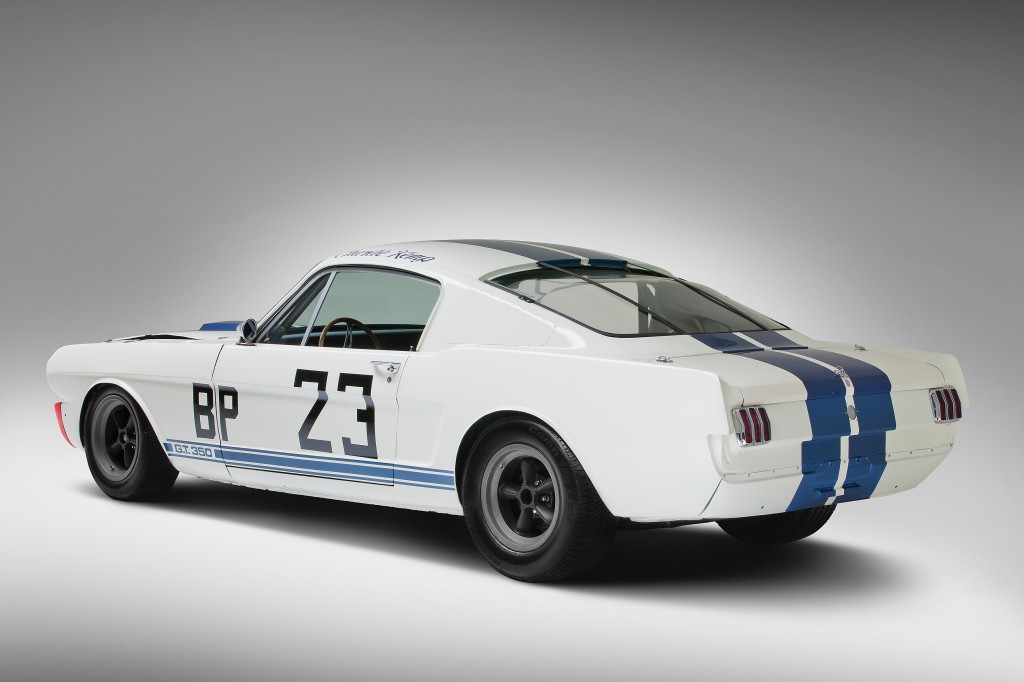 Ample evidence of that statement abounds. In 1968, he began his streak of 17 straight checkered flags, and at Riverside, he set a new top speed record for GT350 Rs. And then, when he got to Daytona in 1969, racing history was changed by Charlie forever. 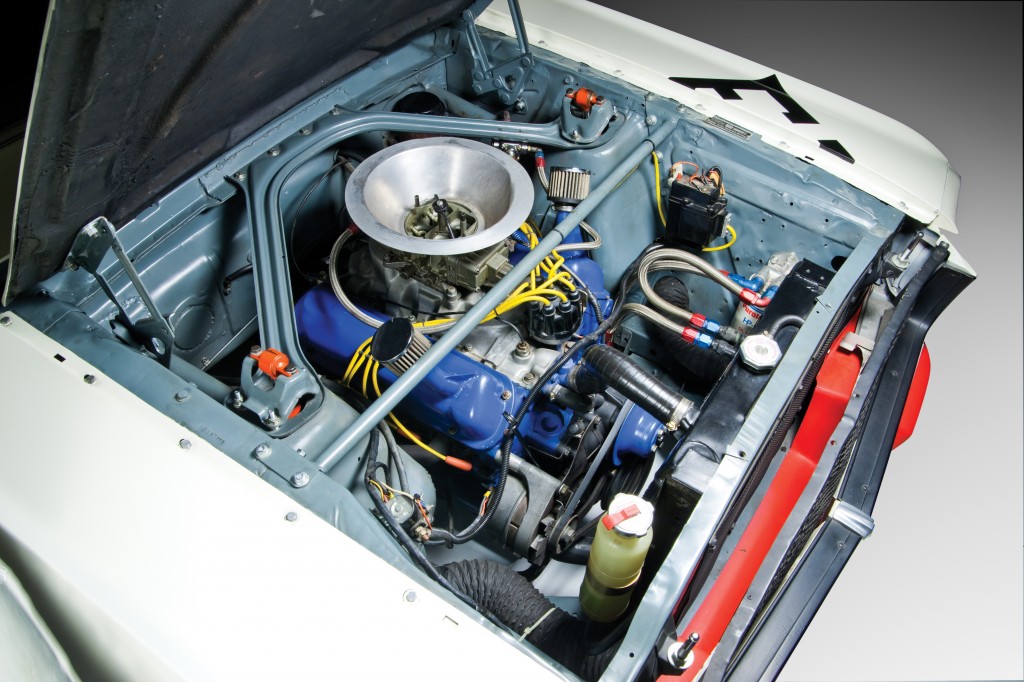 Charlie Kemp had no reason to stay ahead of the A-Production ZL-1 Corvette in that race, and he had no reason to think he could outpace the aluminum-block, 427-cubic inch monster. But he did. Up until that point, Charlie reports he and Pete had kept the car under 7,200–7,400 rpm, which was all he had needed. However, when coming out of turn one of the “Big D” ahead of the Corvette, he kept his foot to the floor and pushed it to 8,400 rpm. He made it a race, pulling away from the Corvette on the straights and then losing ground in the turns. His gearing chart for the race (which is still extant among this car’s paperwork) and Daytona’s radar agree: along the long straight, with no chicane in those days, he hit 184 mph, not only the highest speed ever recorded for a GT350 R but also the highest known speed for any Shelby 289, including Cobras. “Carroll [Shelby] said it was the fastest one he’d ever seen,” said Charlie. “He said he didn’t understand how it went 184 mph…but it did.” An inspection after the race could find no evidence of cheating, and the most Pete Hood ever admitted to was a .030 overbore and 430–450 horsepower. “That record still staggers me—to move that brick through the air that fast. At first, we didn’t believe the timer,” he said. Through 1971, Charlie would start 54 races in the car, finish 42 of those and win 32, which was a remarkable, even astonishing achievement. Talladega even named their first sports car race after him in 1970, the Charlie Kemp Challenge. Ironically, few competitors wanted to enter just to lose to Charlie, and the race ended up as more of a scramble, with cars of all classes in the field. Fortunately for them, his oil filter let go, so he only finished 3rd, along with setting one of his 16 lap records. 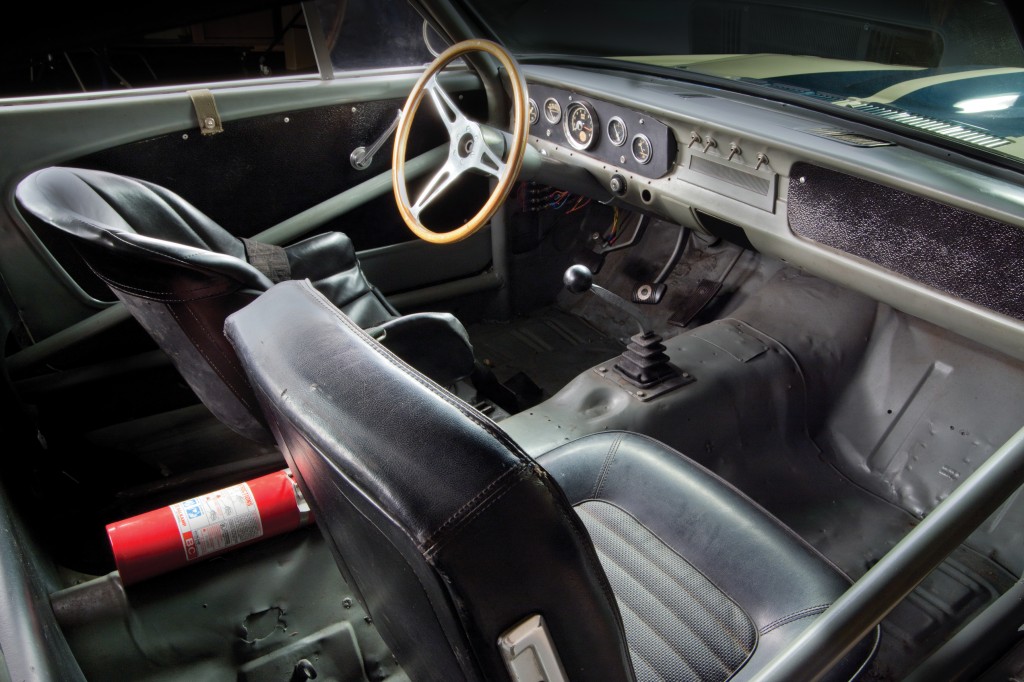 The car briefly left Charlie’s hands during his Can-Am years, but he soon bought it back; thus making him is the second, fourth, and, to this day, the current owner. In the 2000s, he and Pete Hood restored it to full “as raced” specification in his signature #23 livery, which included the original Shelby American Torq-Thrust magnesium wheels, a pair of siamesed 22-gallon steel gas tanks for endurance racing, and even its original wood-rimmed steering wheel. As before, the Hood-modified suspension has been freshened, while the engine was completely torn down and rebuilt by Pete, but it still has the rare and original aluminum Cobra intake manifold (with a Pete Hood-modified Holley carburetor attached). As further testament to Charlie’s superb driving skills, the car was never in a major accident, and it retains most of its factory sheet metal, which includes the Ford inner fender K-Code stampings that are correct for Shelby chassis 5R538. The Shelby lightweight aluminum window frames, Plexiglas windows, and scores of other original pieces survived. Even the right-hand co-driver’s seat is the one that it was originally equipped with, and it complements the racing seat Kemp bought in 1968. While the car is not a turnkey racer, both Kemp and Hood are available to assist the new owner in preparing it for historic racing. 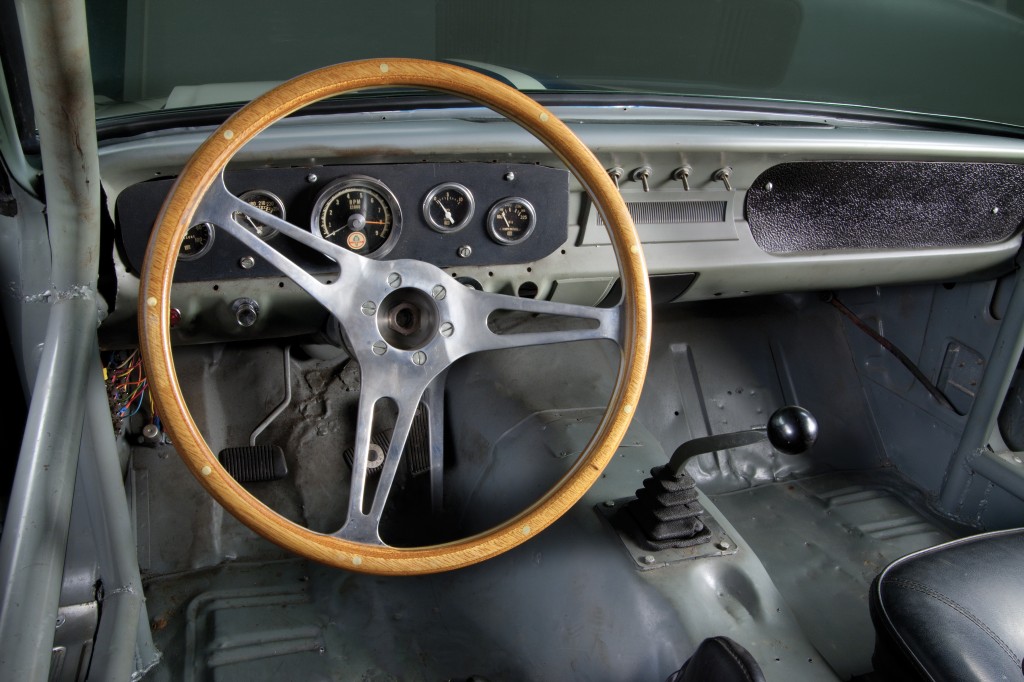 There are literally enough stories about Charlie Kemp, 5R538, and Pete Hood to fill a book (if you get the chance, ask them about the sabotage at Daytona). But unlike almost any other cars from the period, both men and this track weapon are still around to tell them. And tell they do. This Shelby has been impressively and painstakingly documented, and its stellar history, priceless photographs, and event artifacts have been collated in a bound aluminum-covered book, illustrating the timeless achievements of man and machine. This compendium includes copies of the MSO and factory order, notes of further competition upgrades by Shelby American team driver Lew Spencer, the factory invoice to Treadwell Ford, and even Charlie Kemp’s original Bill of Sale. In addition, the car will be sold with a valid title in Kemp’s name. 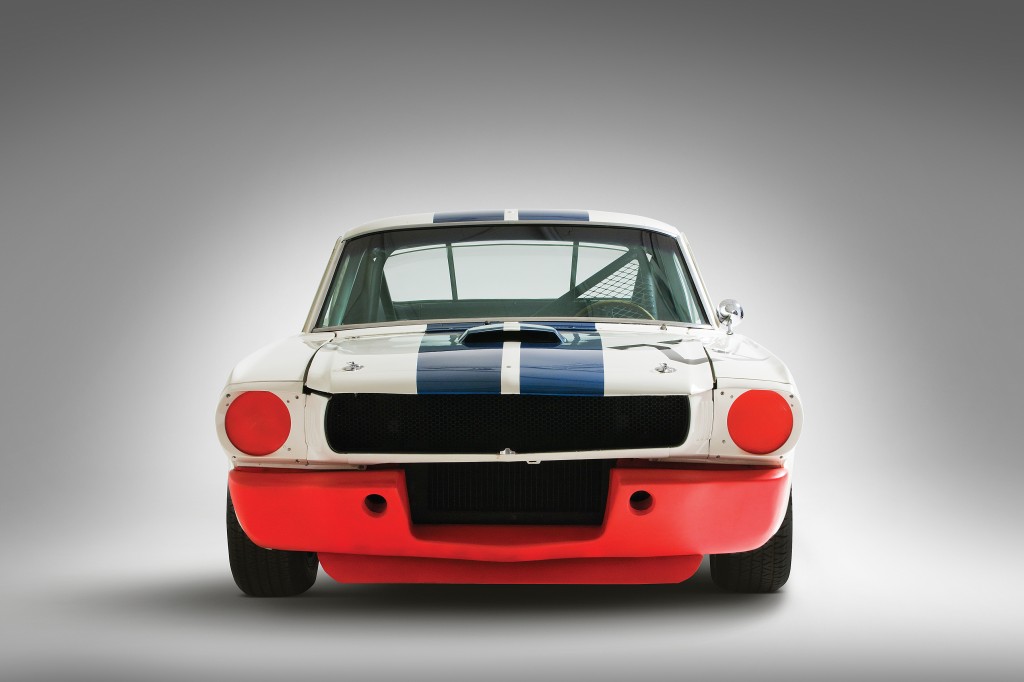 Within this much celebrated and ultra-successful racing car, made by an iconic maker, lies an investment-grade opportunity to pick up where Charlie Kemp left off: to write the next chapter of the book and reintroduce a new generation of drivers to that sinking feeling that comes when the #23 GT350 R appears behind you. 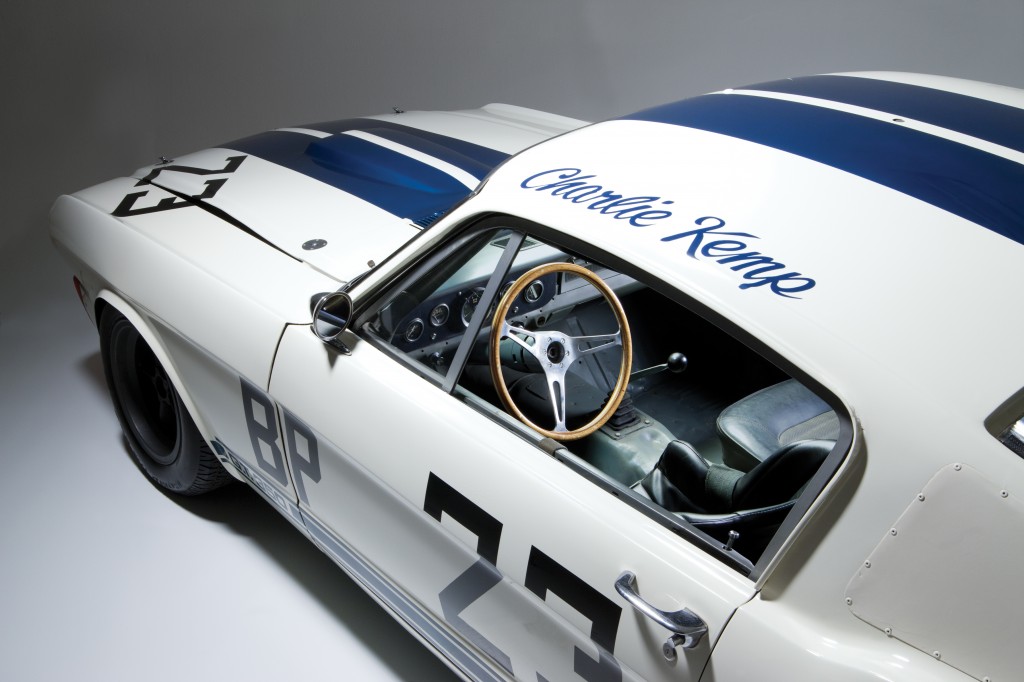 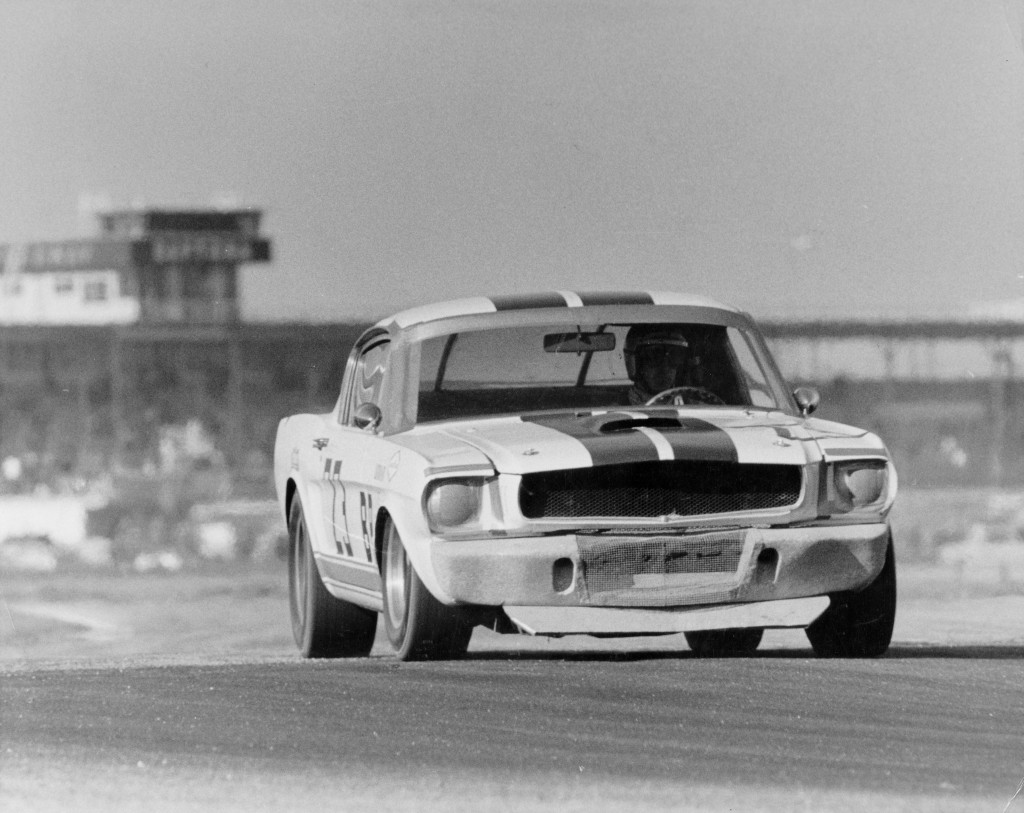 The chance to acquire a GT350 R with significant race history doesn’t come often. But there is only one “winningest” Shelby, and with driver Charlie Kemp and crew chief Pete Hood on your team, it’s the closest one could possibly come today to racing in the 1960s. “It has been a winner,” said Charlie. “Everybody who drove that car won races in it. It’s kind of a magical car… some cars are just that way.”