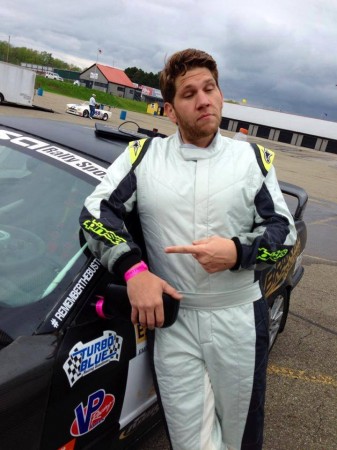 Matt Brandenburg, Founder of Brakim Racing is the driver of the VAC Motorsports powered BMW E36 M3. Self proclaimed thrill seeker, Brandenburg is well known for his sideways driving style, lack of lifting and as we’ve all seen on YouTube, breaking records for the largest of in race jumps. While most would call his antics insanity, he just calls it a good time.

At just fifteen years old, Brandenburg started an internet marketing company out of his parents basement which eventually led to his dropping out of high school to run the business. In a few short years, his self created marketing software had landed him a feature on the widely acclaimed prime time television shows 20/20 and 60 Minutes.

Always the car enthusiast, Matt purchased his first super-car, a 1998 Dodge Viper when he was a mere seventeen years old. He quickly built it into a 700HP obnoxiously loud daily driver that he thoroughly enjoyed for several years to come. Years after his first track experience in the Viper at Atlanta Motor Speedway, he attended a weekend auto cross event and fell in love with the track all over again.

Quickly realizing that a few short months of summer couldn’t provide the amount of seat time he craved, he sought out options for racing year-round.

Any ideas where that led? You guessed it. Stage rally. He immediately booked a trip to New Hampshire to attend Team O’Neil Rally School. Brandenburg quickly realized that he knew very little about advanced driving techniques and had some work to do. In his pursuit for experience, he flew the infamous Wyatt Knox to his hometown as well as the location of Brakim Racing Rally Testing Facility in Dayton, Ohio. For the next year they lived and breathed all things rally which involved the studying, debauchery and of course, daily hoonage you can see posted on YouTube in hundreds of videos with millions of hits.

Brandenburg has been rally racing ever since and can be found at NASA RallySport and Rally America stage rally races across the USA.