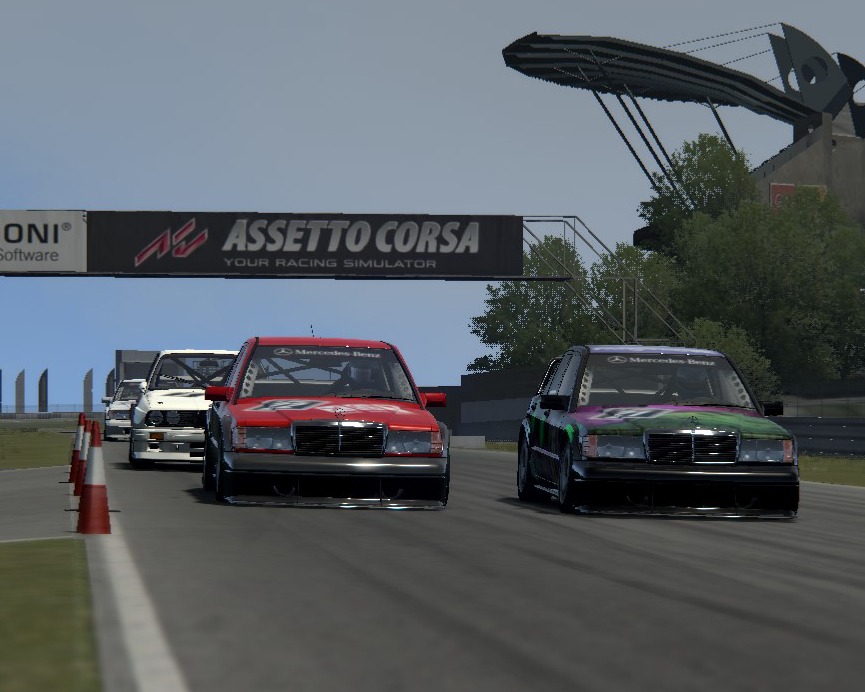 Let’s be honest here. I’m broke, I’m in my early 20’s and I live with my parents for the reason I just mentioned. However. All of my life I wanted to be a racing driver, and while my driving skill is not atrocious, it’s not enough for me to actually go and start knocking on the doors of racing teams and sponsors in hope that someone will give me a chance. However!  I do have a chance to actually hone my skill and battle it out on the track pretty much any time I want. And so can you.

You see, for years driving and racing simulators were nowhere near the level of realism to compete with the real wheel-to-wheel racing. While yes, some of them, like rFactor, Life For Speed, Richard Burns Rally, GT-R 2, and so on, offered a certain level of realism, they were still limited to what the developers could do at the time. Think about it, the most acknowledged rally sim, RBR has been around for over a decade! Yes, there are advantages and certain charm to playing any of the older sims, but it’s time to move on from the past and take a look at what we have in store in terms of hardcore, bite-your-nails-and-tear-your-hair-out kind of simulators, as well as go through all of the costs of this very affordable way to satisfy your need for speed.

Let’s start with the most important thing for people on a budget – the cost. Now, while you don’t need to take out a second mortgage to do online racing, it is advised to keep your computer at least a little bit efficient. My computer is being used for things other than gaming, which sometimes require even more processing power than most advanced video games, so I went for the option that will not require me to have to update my hardware every three months. The computer itself cost me almost $2,000, but it has three 1 TB hard drives, 12 GB of RAM, an 8-core processor and a pretty good video card. On top of that I have the most important device for simracing – racing wheel. Ever tried steering a car with a gamepad or even worse, a keyboard? Just as the computer, it doesn’t have to be super expensive, but I do recommend something that has a decent force feedback and a good turning range. The first wheel I had was a Thrustmaster Ferrari GT Experience, which you can purchase at a very affordable $50 or so, depending on where you go to purchase it, but after awhile I got very tired of the 180 degree turning radius and a bad force feedback, let alone the fact that it started going, most likely because I had no idea on how to handle a racing wheel. After some not very successful search for a Logitech G25/27, I decided that the best alternative was to buy a wheel that was one step below that – Logitech Driving Force GT. At less than half of the price of a G27, Driving Force GT, or as it is more commonly known as DFGT, offers pretty much the same thing, albeit it would be nice to have three pedals and an H-shifter. The most expensive, and the most realistic wheels on the market today are the Thrustmaster T500RS, or if you really have unlimited resources – Fanatec Clubsport. While I do agree that they probably offer the most authentic level of realism, in my opinion, if you can spend $700 on the wheel base alone, not to mention having to purchase the wheel, pedals, shifter and handbrake separately at a pretty outrageous cost, then you might as well go buy an actual race car and start driving in real life.

So there you are, you have your rig set up just the way you want it, your computer is strong enough to run even the latest simulators, or at least the one of your choice, and now comes the hardest part – choosing the sim that suits your needs. As I mentioned earlier, you are more than welcome to try out the older sims, my personal favorites are the rFactor, RBR and LFS, however, after playing modern sims, it’s really hard to get back into any of the older simulators. It’s not just the graphics, which are undoubtedly better in most of the simulators that are on the market these days. What catches my attention the most is the fact that we finally have a genuine improvement in calculating the physics that take place while driving a high powered car. After all of this you really have to force yourself to go back to now dreaded old school sims.

So how do you choose a simulator that fits your needs? Well, this is where you have three legal options. Option number one – try them all. If you can afford to fork out $20-60 per game, sometimes even more, depending on their pricing policy, then be my guest. Not going to lie, I chose this option for the most part. Yes, it ended up being quite pricey, but as a bonus, I was able to get the experience of trying out all of the best sims the market has to offer firsthand, which is better than option number two – do your homework. Not literally, of course, by homework I mean going through all the information you can get on all of the sims that interest you. All of the major sims on the market today offer something unique, while being inferior to competitors on one way or another. Now, in this article I will be talking only about sims with genuine online modes, so Dirt Rally has to wait for a little bit, even though it is one of my personal favorites, and Project CARS will not be included, because it’s anything but realistic.

Let’s start with the most known sim of them all – iRacing. Now, while the force feedback, online capabilities and overall realism in iRacing is beyond amazing, their subscription policy, car choice, and lack of modding options is very discouraging. If you want to feel that you are driving a car, competing against other people who care about clean, professional racing, and as long as you don’t mind forking out some money every month, then look no further. From a well known sim to something of a dark horse – RaceRoom Racing Experience. Now, while it does say on their website that their racing is free, unfortunately, it’s not true. The developers of RaceRoom took the same marketing classes as the developers of the Forza series and are charging for every additional car or track that interests you. While it does add up to quite a lot of money if you want to buy all of the content, it does make sense in a way. Why would you want to pay for a game when you are only going to compete in one series? If you only want to compete in historic DTM races, then why pay for modern race cars? The AI in the game is absolutely phenomenal, the cars are very realistic in handling, and, even more importantly, are different. Sticking to the classic DTM as an example, some cars, like the Opel or the Mustang are very fast in the straight line, but are terrible on the brakes, others, like 190e and the M3, are a bit slower on the straights, but are very good in the corners, so depending which track you are on, certain cars will have the advantage, which is very realistic, if you ask me.

There is one game that I am trying my best to ignore, however, and it is the dreadful rFactor 2. While its predecessor reached a legendary level of support and a dedicated fanbase, the second installment left the majority of the people run for the hills. At first it looked like a perfect sim was in the making – the aged engine was being swapped over to the new one, which allowed for a better graphics, dynamic surface change and overall better capabilities, but something went wrong… Instead of providing its fans with a great sequel they promised, the developers of rFactor 2 slapped them in the face with an outrageous subscription policy, which would be fine with most people if the product was anywhere near usable. Instead, the cars are undrivable, modding capabilities are virtually nonexistent and the worse of all – because the game was rushed and late at the same time, it ended up being a mere shadow of its legendary father…

Personally, I can’t get my hands off of Assetto Corsa. While yes, the amount of content available from the box is not very big at the moment, there’s an occasional visual glitch here and there, and the AI still feels very dated, the game is making up for it with a tremendous amount of mods, very sharp feedback, completely customisable interface and by far the best support forum I’ve ever encountered. Basically, what the developers did, was look into what was a difference between a good game and a legendary game, and the answer was right there on the surface – great base game with easy modding capability. Let me put it in perspective – people still play games like RBR, rFactor, even Counter Strike 1.6, even though they are old, because all of these games are very easy to mod, and that’s where Assetto Corsa is ahead of the competition. While I undoubtedly enjoyed my time with most of the other new racing sims, at the end of the day, if I want to compete in various different championships, and have the ability to mod any of the elements of the game to my liking, there’s only one choice.

Below is the video from the historical championship that just started on a Kazakh website, called URC.kz. The base simulator is Assetto Corsa with the latest DLC, and, as some of you may notice, there is a car with the Build Race Party logos on it. There is a very easy explanation here – at the moment I am taking part in this very competitive championship, and am currently third in the standings.