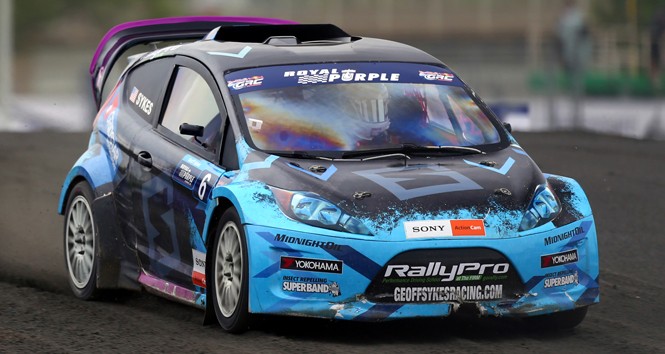 Geoff Sykes and the DTV Solutions squad were the little team that could in the 2014 GRC Lites season. A family-funded privateer outfit, Sykes’ team persevered through a trying season, showing flashes of brilliance and speed even when confronted with every unlucky break imaginable. If not for a penalty in Daytona and an incident in Seattle, Sykes’ speed at both of those tracks had him as a podium favorite.

In 2015, he’ll get another chance to deliver on that promise. As Lites’ longest-tenured driver, Sykes will be looked at as a title contender and potentially a race winner for the first time. In an exclusive interview, he talks about retooling for the 2015 season, the tracks he’s hoping to visit, and how he plans to give back to his fans:

To say that 2014 didn’t quite go your way might be an understatement, with a crazy amount of bad luck derailing your title hopes. What were the most important lessons that you took out of the season?

Last year started out great, I was 3rd in the championship points just a few races in but after a couple bad results and DNFs I put a lot of pressure on myself to stay in the Top 3 and let my emotions get the best of me. My fastest lap times came when I was driving calm and confident and that’s my main goal as a driver this year.

This will be your third season in Lites, during which you’ll become the most experienced driver in the class. How much does two years worth of experience in these cars prepare you to mount a charge for the title this time around?

My 1st and 2nd year in the GRC series were dramatically different, in 2013 I ran with Olsbergs MSE and had Andreas Eriksson, Brad Manka and Steph Papadakis to work with. I gained a ton of knowledge about the cars and setup which was invaluable to running my own team in 2014. This season I’m very comfortable in the GRC Lites car and I can focus more on my race craft and learning the tracks much quicker.

Running a single-car team means that you’re fully responsible for collecting all of your own data. With that in mind, how crucial is preseason testing to getting the car right, and how much track time have you had so far?

It’s a long offseason so testing is very important to me. I’d drive the GRC Lites car everyday if I could! I was able to get one dirt day and one tarmac day of testing on my own out here in California. The big difference this year will be working under a new program through Tim Bell Racing, who are providing full race support. We have a couple of days planned at The FIRM (Florida International Rally & Motorsports Park) before Round 1 to be fully prepared to kick off the 2015 season.

GRC Lites makes its first trip outside of the United States this year with a doubleheader round at Barbados. How excited are you to race overseas with this series for the first time?

I’m beyond excited to make my international debut with GRC in Barbados. Watching the Supercar race last year, the track looked very fast and competitive. I love tracks like that where we can get up to 6th gear and really push these cars to their limits. I’ve never been anywhere like Barbados so I might have to extend my trip and make that my vacation for the year!

Are there any other tracks you’re particularly looking forward to competing at?

I loved everything about the track in Daytona last year. It was the longest course of the season, had the highest speeds as well as a great dirt section. I’d consider it the superspeedway of GRC courses. Los Angeles is also my favorite—being my hometown race, I get to see a majority of my 3Fs (friends, fans, and family).

Yours is one of the most passionate fanbases in all of Red Bull GRC, propelling you to a victory in our Top GRC Moments poll last year. What do you have planned for this season to stay engaged with your fans?

Everyone who follows and supports me is truly a part of my team and I can’t thank them enough! Taking the Top GRC Moments poll for being resilient meant so much to me and to our small team. With the support of my sponsors I’ve got some giveaways planned throughout the year as well as some fun YouTube videos. I also plan on doing more updates and videos during the events so those that can’t make it don’t miss anything.

Finally, what’s going to be more crucial to the championship chase—piling up victories, or consistency from race to race? With that in mind, how are you approaching the season?

This year I’m going to take it race by race with the same goal in mind, make it to the finals and finish each race strong, no DNFs! If I’m able to do that I think the championship will work itself out.